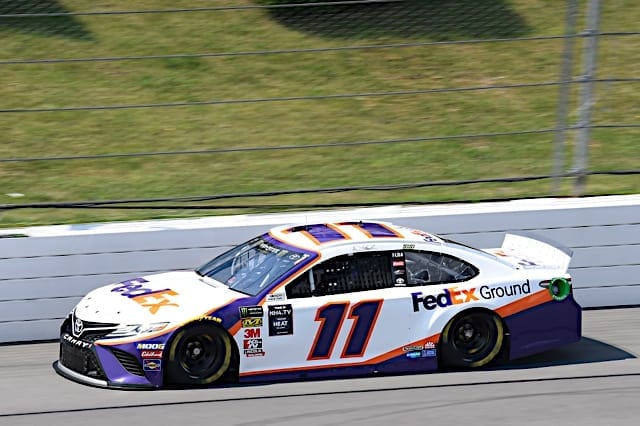 This time, Denny Hamlin didn’t let the win slip away.

One week after failing to get by Kevin Harvick in a last lap battle at New Hampshire Motor Speedway, Hamlin captured the checkered flag at Pocono Raceway.  In a race where fuel mileage and a few late-race restarts made the outcome a guessing game, Hamlin executed perfectly and redeemed himself from a frustrating result in the previous race.

Until last week, Hamlin and the No. 11 team had spent most of the summer laying in the weeds.

Victories in the Daytona 500 and at Texas Motor Speedway set Hamlin up for the playoffs well early on.  The month of May was a different story.  Four straight finishes outside the top 10 put the points lead out of Hamlin’s reach.  With drivers like Martin Truex Jr., Joey Logano and Brad Keselowski posting strong results, Hamlin’s name began to slip out of the conversation of drivers who were most likely to reach the final round of the playoffs.

Last week’s race in Loudon seemed like a great opportunity for Hamlin to reestablish himself as a championship contender.  He appeared to have the best long run car through the race’s final stage, but lost the lead to Harvick while making his final pit stop of the day under caution.  When the race resumed, Hamlin easily got back to second but struggled to catch Harvick.  Despite having fresher tires, he could not get any closer than about half a second in back of the No. 4.

When Harvick got hung up in lapped traffic in the race’s final minutes, Hamlin got an extra opportunity to make a decisive pass.  The lapped cars slowed Harvick down so much that Hamlin got to his back bumper on the white flag lap.  Racing through turn 1, Hamlin put the bumper to Harvick, but he was unable to take the lead away.

Perhaps Hamlin didn’t push Harvick far enough out of the groove, or maybe he just didn’t hit the No. 4 hard enough.  Whatever the case, Hamlin and Harvick raced side by side down the backstretch.  Hamlin attempted to go around Harvick on the outside in the final set of turns, but Harvick’s launch off of turn four was too much for the No. 11.

The race that could have reignited Hamlin’s championship bid was lost.  A visibly frustrated Hamlin offered some colorful words after the race, but none summed up his disappointment better than “second sucks.”

One week later, Hamlin is in victory lane.  He didn’t have the dominant car this time, but when teammate Kyle Busch’s off-sequence pit strategy buried the No. 18 deep in the field, the door opened for the other three Joe Gibbs Racing drivers to fight for the win.  Hamlin found himself in third after Busch’s pit stop, trailing Truex and leader Erik Jones.  With all the leaders concerned about fuel, and with Harvick closing in on the JGR trio, Hamlin made his move with under 20 laps to go, taking the lead away from Jones on lap 144.  He never relinquished it.

Battling for the lead while trying to save fuel was a risky strategy play for the No. 11 team.  Hamlin would have had greater control over his own fuel situation if he had stayed behind the leaders, allowing Jones, Truex and Harvick to race each other harder and potentially, run their own fuel tanks dry.

By running up front, Hamlin put himself in a more vulnerable position, especially with so many contenders close behind him.

“I was in fuel save mode and still trying to get around those guys,” Hamlin said after the race.  “Once I knew I got around them, then I really went into conservation mode instead of stretching the lead out there.

“I knew the [No.] 20, he passed me on pit lane somehow,” Hamlin added.  “We actually dropped the car after that pit stop and packed it full of fuel with the car leveled, just to get a little bit more gas and the [No.] 20 didn’t.  I don’t think he did that, so I knew he was shorter on gas than us, so I knew I was kind of racing the 19 there.”

If Hamlin was not aggressive enough in New Hampshire, he was just aggressive enough on Sunday to take the lead when it mattered most.  Fuel mileage became a moot point when Josh Bilicki’s stalled car brought out a late caution, but by that point Hamlin was in the lead.  Jones put up a good fight on two late restarts, but he was not fast enough to catch the No. 11 on the short runs.

As a result, Hamlin cruised to his third victory of the season.  He’s banked 18 playoff points, the fourth most of any driver.  He also remains fourth in overall points and would pick up seven additional playoff points if he holds that position through the last five races of the regular season.

Just a few weeks ago, Hamlin’s early-season wins felt like a long time ago.

Talk of him contending for a championship had settled down considerably since the spring.  Then, Hamlin missed out on a win at New Hampshire, and everyone was talking about him for all the wrong reasons.  Viewed from Hamlin’s perspective, Sunday’s race was a reminder about how quickly fortunes can change in NASCAR.  Instead of frustration and confusion, Hamlin’s comments from victory lane reflect a keen awareness of how the race was unfolding around him.  They indicate that the No. 11 team had a better plan for closing out the race than they did one week ago.

Perhaps Hamlin learned a lesson about closing from his loss last week.  Maybe that disappointment will prove to be a good thing in the long run.  Regardless, there should be no more maybes about his status as a championship contender.

“ALL WE DO IS WIN” Denny Hamlin