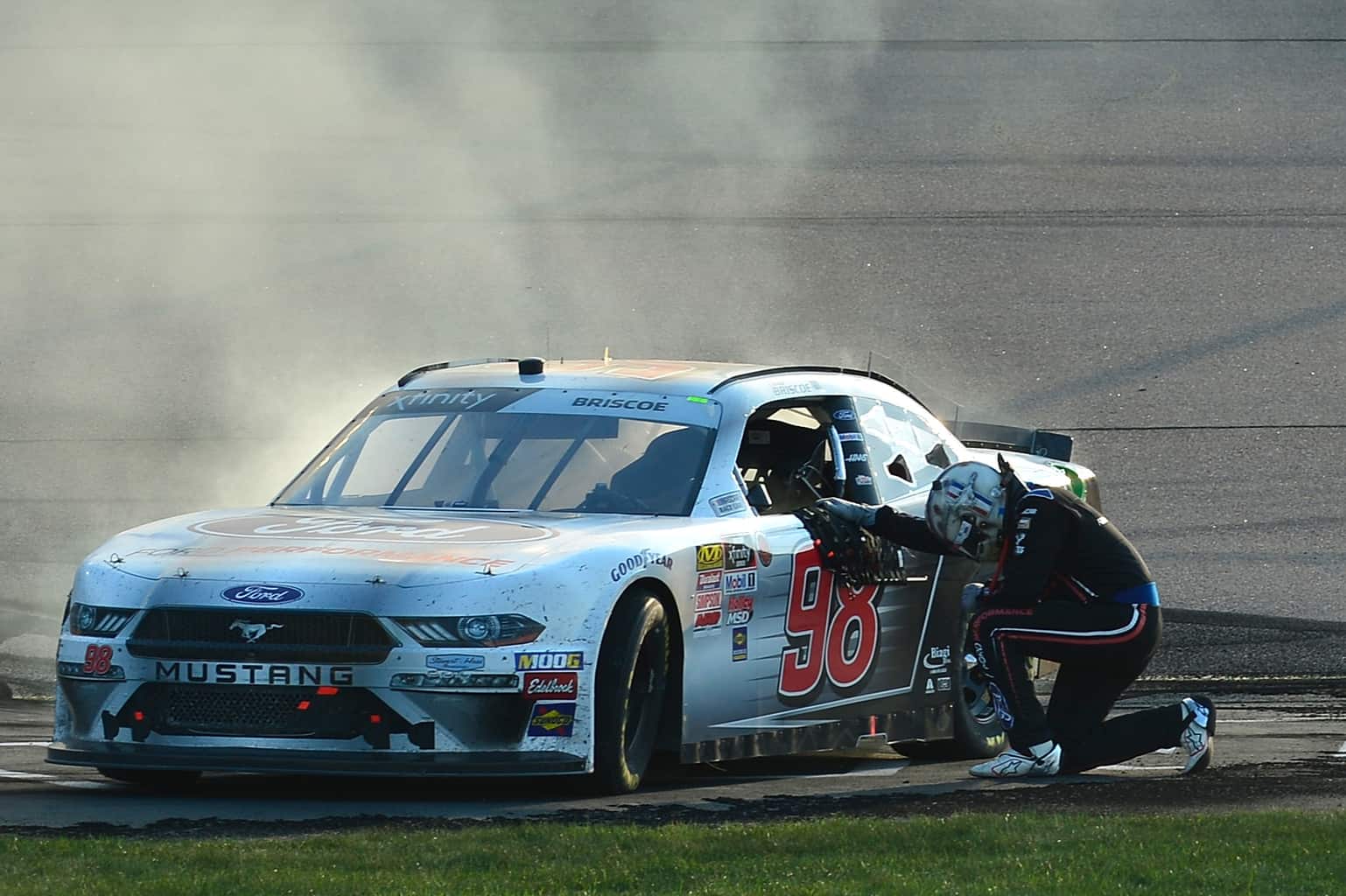 Christopher Bell was doing it again on Saturday afternoon in the U.S. Cellular 250. Winner of the previous two NASCAR Xfinity Series events at Iowa Speedway, Bell led more than 230 laps, made no mistakes and generally looked unbeatable when he was out in front in clean air.

His chief rival this season, Cole Custer, retired from the race after 160 laps, making it look like almost a certainty that Bell would make it three in a row.

But to paraphrase an old Chris Berman line, that’s why they run the races.

With Custer out of the running, his teammate Chase Briscoe played spoiler instead, running Bell down inside the last 10 laps and passing him to lead the final handful of times around the 7/8-mile oval to take the checkered flag. The win was only the second in the Xfinity Series for Briscoe, who first broke through last fall at the Charlotte Motor Speedway ROVAL.

What a battle in the closing laps between the 9⃣8⃣ and the 2⃣0⃣.

It was an unusual sight for two reasons. The first was that Bell simply hasn’t been run down too often when it counts this season. While he was a glum runner-up just two races prior at Kentucky, his No. 20 Joe Gibbs Racing Toyota didn’t look like the best car over the final half of that race.

Not so this time, as it wasn’t until the very end that Bell’s machine looked like it lost its edge on the competition. Asked after the race if he could have done anything differently to hold onto the lead, Bell seemed at a loss for ideas.

“I felt like my best bet to win the race was to try and stay right on his door and chase him down into the corner,” Bell said. “Maybe could have charged the corner a little harder and not let him clear me, or just opened up my entry and tried to turn down. … There’s no telling. So anyway, he did a good job and he won the race.”

Perhaps of greater intrigue to the season as a whole was what seeing Briscoe in victory lane could mean for the championship hunt. Prior to Iowa, only the Big Three of Bell, Custer and Tyler Reddick felt like safe bets to be around to the very end at Homestead-Miami Speedway, with Michael Annett the only other driver even locked into the playoff field.

Briscoe’s victory changes that calculus ever so slightly. He’s no title contender at this point — he has fewer playoff points in the bank than even Annett, as he’s not won any stages in 2019 — but since his organization has also put Custer in the winner’s circle five times, it clearly has the raw speed to be a factor. Briscoe also got it done on Saturday despite incurring a pit road penalty at one point, showing the resilience to battle back through the field.

And while Bell and his team don’t seem the types to be rattled by a narrow defeat, they definitely have to ask themselves a few questions about letting one slip away, something they’ve rarely had to do this year.

Along with Briscoe, it was a good day for John Hunter Nemechek. The 22-year-old bounced back big time from a season-worst 36th at New Hampshire Motor Speedway, his fourth straight race without a top-10 result.

For a few laps in the final stage, it appeared it might be Nemechek, not Briscoe, who had the best shot at racing Bell to the checkers. His No. 23 GMS Racing Chevrolet had the kind of speed it’s struggled to show consistently, and Nemechek didn’t put himself in trouble while racing with the leaders as he’s occasionally wont to do.

His third-place finish was well deserved, and he got to lead some laps as well. Don’t discount his chances of sneaking away with a win in one of the final seven regular season races to position himself as a playoff dark horse.

Except for a stretch toward the beginning of the season, Custer’s only weak spot in 2019 has been his inability to put together three consecutive top-notch runs. After winning at Kentucky Speedway and coming home second at New Hampshire, a 29th-place result is not what the No. 00 team was expecting, especially after finishing second in the first Iowa race this year.

Custer was headed down the backstretch when his Ford took an abrupt turn toward the outside wall with less than 100 laps to go.

From bad to worse for @ColeCuster.

Take a look at what happened to the 0⃣0⃣ heading into Turn 3. pic.twitter.com/7hZvK42Rew

That incident came shortly after Custer was hit with a penalty for speeding on pit road, so it was a day the California native will want to put behind him as soon as possible.

While it (fortunately) lacked the pyrotechnics of Juan Pablo Montoya’s infamous Daytona 500 run-in with a track dryer, the wreck that knocked out Dillon Bassett on Saturday was no less bizarre.

Yes, that was Bassett colliding with one of the vehicles cleaning the track under caution, and while the driver said later that it wasn’t his spotter’s fault, there’s still a pretty big question raised by his misfortune: Why would NASCAR open pit road with safety vehicles so low on the track and so close to the entrance to pit lane?

Bonus ugly points to NBCSN for not seeming to know this happened for several minutes. Wrecking with a safety truck is something you never want to see from anyone, but it was a particularly bitter pill to swallow for Bassett’s underfunded team since they had run well all afternoon.

Shane Lee made his sixth straight Xfinity Series start in the U.S. Cellular 250, and it was his best of the season, as he finished seventh. He also got called Stan Lee on the broadcast, which was a gaffe by the announcers but something of a backhanded honor to be confused with the late Marvel Comics icon.

Ray Black Jr. also had himself a bit of a day, winding up in 11th place. That tied a season-best mark set all the way back at Las Vegas Motor Speedway.

None to speak of. With the other two NASCAR national series at Pocono Raceway, the Xfinity Series drivers had Iowa to themselves as usual.

“It was fun. We were throwing sliders on each other and everything else.”- Chase Briscoe

It’s funny that Iowa is one track whose reality doesn’t always live up to its reputation. Anecdotal evidence suggests most NASCAR fans enjoy the racing there (and wouldn’t mind if the Monster Energy NASCAR Cup Series stopped there too), but Bell has been stinking up the show there as of late and nearly did the same thing again.

The fun in this edition of the U.S. Cellular 250 came almost entirely in the last 10% of the race. Is that enough to make it a high-quality race overall? That’s up to each fan to decide for themselves, but this one felt like a very average movie that only gets livened up by an unexpected plot twist in the final act.

It’s a whole new ballgame next week as the Xfinity Series starts a stretch of three road course races in four weeks with a visit to Watkins Glen International. The entry list will be of particular interest early in the week, as the Xfinity race in New York state has been dominated in recent years by Cup Series drivers — especially Joey Logano, who has claimed the checkered flag in three of the last four events.

Top paragraph sort of omits the fact that Bell’s crew chief blew it for him, pitted for his last set of tires way too soon. Briscoe won on newer tires, it’s as simple as that. Not to take anything away from him since I am a Ford guy, but let’s be fair to Bell as well. Bell is saddled with a less than great crew chief, the guy that blew more races for Kenseth than a smoker blows rings.