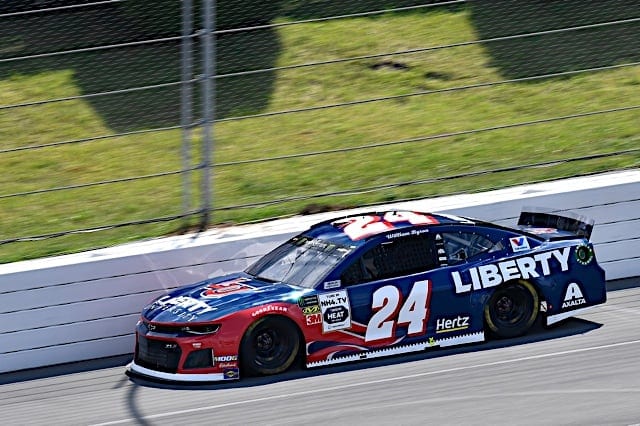 The Gander Outdoors Truck Series and Monster Energy NASCAR Cup Series took on the Tricky Triangle, all 2.5 flat miles of Pocono Raceway, while the Xfinity Series returned just east of Des Moines at the 7/8-mile Iowa Speedway. Ross Chastain won easily Saturday afternoon, and not even an overtime finish on Sunday could enliven the action much. On the other hand, Christopher Bell dominated in Iowa for much of Saturday, only for fellow dirt-tracker Chase Briscoe to track him down and snatch away the checkered flag on fresher tires.

One track provided good racing, the other didn’t. One track will try all sorts of gimmicks in 2020, running five races in about 48 hours, while the other still doesn’t have Cup racing.

Jimmie Johnson‘s downward slide continues. The Hendrick Motorsports veteran has just three top fives and eight top 10s through 21 races, which resulted in a midseason crew chief change as Cliff Daniels replaces Kevin Mendeering atop the No. 48 pit box beginning this weekend at Watkins Glen International. His average finish is 15th, and he’s currently in danger of missing the playoffs for the first time ever.

Johnson’s former crew chief, Chad Knaus, is now paired with young teammate William Byron, who’s starting to put things together in the No. 24. He has three poles and seven top 10s, including three in the past five races. And he’s also taking college classes at the same time.

Meanwhile, Chase Elliott has hit a rough patch, with five finishes of 20th or worse since Michigan, including three DNFs. He’s locked into the playoffs due to his Talladega win, but this might be concerning for No. 9 fans.

Brad Keselowski drove the Team Penske No. 2 Ford Mustang to an eighth-place result on Sunday, his 11th top 10 of the year, which goes nicely with three race wins, a pole and seven top fives for the 2012 champ.

The good news for JTG-Daugherty rookie Ryan Preece is that he has two top 10s. The bad news is that he also has 13 finishes of 25th or worse, including five DNFs. Outside of superspeedway tracks, his best finish is 16th at Martinsville, while his average result is right where he usually begins in 24th.

The Paint Scheme of the Week goes to Kevin Harvick’s No. 4 again, as the Stewart-Haas Racing driver provided an excellent blast from the past with his Gen X scheme, a follow-up to the pink car (many referred to it incorrectly as the “Millennial Car,” though it was actually a Gen Z car as Gen Z consists of people born after 1998, while Millennials were born from 1982 to 1995).

Gen X members were born from about 1965 to 1979, which means that Harvick is one, and the teal and lime green work extremely well with the black base. The Fresh Prince graffiti and the checkerboard pattern also go well. This might be my favorite paint scheme of this season.

Hard work on pit road for the @ManenTail team! pic.twitter.com/PC9vxp7SHZ

Landon Cassill‘s No. 00 for StarCom Racing, sponsored by Mane ‘n Tail pet shampoo, wasn’t hard to miss either, as it was yellowish-orange and hot pink, which somehow didn’t look as hideous as that sounds like it ought to be.

How about that…a Havoline-sponsored race machine this weekend for @benrhodes.

Looking forward to seeing this up close pic.twitter.com/esYW7Q62pe

Finally, Ben Rhodes rewound the clock back to the early 1990s with the first of a three-race deal with Havoline motor oil on his No. 99 Ford F-150 for ThorSport Racing, and it looked amazing. The last time Havoline was in NASCAR was as a primary sponsor for Juan Pablo Montoya in his rookie season of 2008.

When it’s 130 degrees in the car pic.twitter.com/kpnDTRpecb

Cassill tweeted out an interesting look at drivers’ heart rate during a race. That’s crazy.

Briscoe has momentum now that he’s won at his favorite NASCAR track, and oh, yeah, he’s a dirt ace, and the defending champion of the only dirt event on the schedule …

It’s always a good day when you can tell the boss you finished 1-2. #BankOnThe9 | #NTTDATARacing pic.twitter.com/yziHNTwDkM

Chip Ganassi Racing’s NASCAR operation didn’t quite go how they wanted it to, with Kyle Larson moving to a backup in practice and then Kurt Busch getting wrecked late, but on the other hand, their IndyCar stable went 1-2 at Mid-Ohio.

While the Gander Outdoors Truck Series gets to play in the mud at Eldora Speedway for the only NASCAR national series event off asphalt, the Xfinty Series and Cup Series go road course racing at Watkins Glen International.

In the Eldora Dirt Derby, I’m picking Chase Briscoe to repeat in ThorSport’s part-time No. 27 Ford. The main feature will go green around 9 p.m. ET on Thursday, Aug. 1, on Fox Sports 1.

On Saturday, I’m going to go with Justin Allgaier, who’s proven to be pretty good at turning left and right. The Zippo 200 at The Glen will go green around 3 p.m. ET on NBC.

I’m picking Martin Truex Jr to take the Go Bowling at The Glen on Sunday, Aug. 4, which will go green around 3 p.m. ET, with TV coverage on the NBC Sports Network.