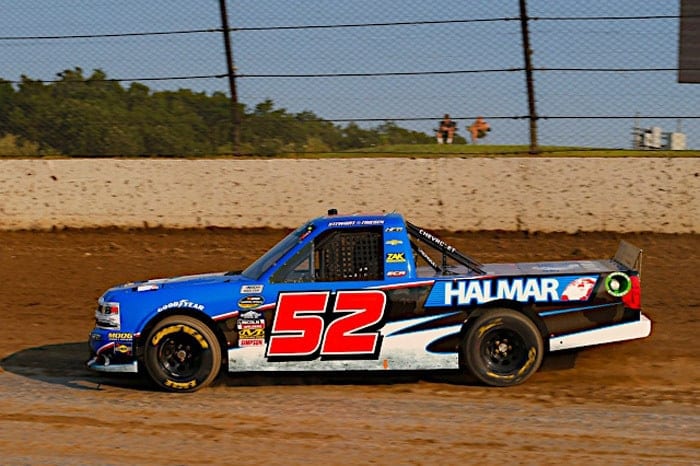 Briscoe, driving the No. 27 Ford F-150 for ThorSport Racing in a one-off effort, shot to the top of the leaderboard in the first session with a lap of 93.473 mph for the defending race winner.

In second was ThorSport’s Matt Crafton at 92.874 mph in the No. 88, while reigning NGOTS champ Brett Moffitt put his No. 24 Chevrolet Silverado for GMS Racing in third with a top speed of 92.450 mph.

Closing out the top five were series regulars and alliance teammates Stewart Friesen at 92.398 mph and Sheldon Creed at 92.237 mph.

Mark Smith, driving the No. 38 for Niece Motorsports, brought out a caution twice, and Briscoe, KBM’s Harrison Burton and Young’s Motorsports’ Gus Dean all brought out the yellow flag in separate incidents.

ThorSport’s Grant Enfinger, the current points leader, turned the most laps in this session at 87, while Darwin Peters Jr took the fewest laps with just one. Peters’ No. 74 Chevy was the slowest vehicle on track at 46.012 mph.

30 of 32 trucks entered participated in this session.

Friesen took the top spot of the leaderboard in the second session with a lap of 90.516 mph.

The rest of the top 10 were Enfinger, Sauter, Rhodes, Strickler and Creed.

Creed and Sauter both spun, bringing out yellows.

Tyler Ankrum drove the most laps this session with 87 in DGR-Crosley’s No. 17 Toyota, while Tim Ward turned the fewest laps at 6 in the No. 08.

30 trucks participated in this session, though Jennifer Jo Cobb didn’t complete a lap.

The qualifying races for the 2019 Eldora Dirt Derby will begin around 7 p.m. ET on Thursday, Aug. 1, on FS1, with the main feature beginning around 9 p.m. ET.