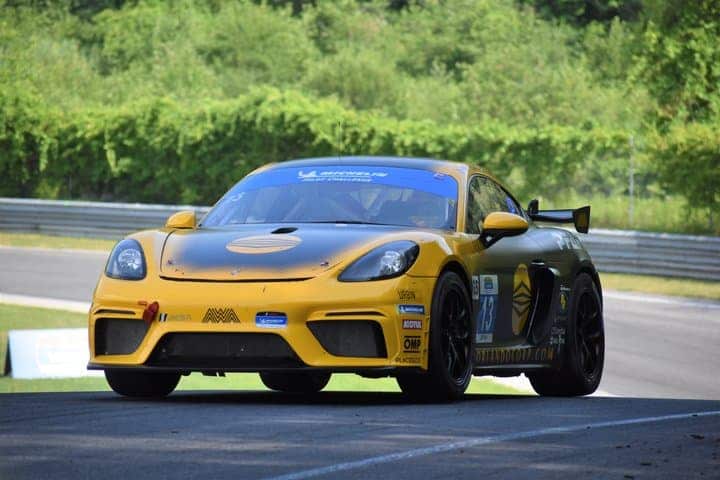 For Saturday afternoon’s Road America 120 for the IMSA Michelin Pilot Challenge, there are currently 37 cars entered, an increase of three cars (pre-withdrawals) from Lime Rock Park.  There are a couple of interesting changes.

First off, there has been a major change at Andrew Wojeczko Autosport (AWA) since the entry list was released.  Scott Hargrove is out of the No. 13 for this weekend at least.  He has been replaced by Chris Green, who is the general manager of the PFAFF Automotive-owned McLaren Toronto dealership and will drive along Orey Fidani.  With that move brings another change for the team.

Yep, that is a McLaren 570S GT4.  The team will make the switch away from the Porsche Cayman GT4 MR that they have raced up to this point this season.  It’s the second new manufacturer for the team in less than a year as they raced a Ford Mustang GT4 full-time last season.  Hargrove told Frontstretch at Lime Rock Park that the team is very good in regards to adjusting to new equipment.  They’ll have to show those skills all over again.

PF Racing is expanding to a second Ford Mustang GT4 this weekend.  Jeff Courtney and Fred Roberts will share the No. 41.  They are longtime teammates that drove Masearatis together in what is now Pirelli GT4 America.

BimmerWorld Racing is also bringing out their No. 80 BMW M4 GT4 for the second time this season.  Ari Balogh and Seth Thomas will drive the car, while Balogh brings sponsorship from AirBnB to the car.  Expect a similar-looking car to the Aston Martin that he and Greg Liefooghe raced at Lime Rock.  Speaking of Liefooghe, he’s back in the Stephen Cameron Racing BMW this weekend alongside Henry Schmitt.

In TCR, there are 13 cars entered this week, up from 12 at Lime Rock.  The lone addition is the part-time second entry from JDC-Miller MotorSports with Britt Casey Jr. and Mikey Taylor at the wheel.  In their two previous starts this year, they’ve been very strong, winning at CTMP and being in the hunt for victory at Mid-Ohio.

There are also driver changes at KMW Motorsports with TMR Engineering.  Both Alex Popow and Alexandre Papadopulos are apparently out of the No. 3 Alfa Romeo Giuletta TCR.  Only Mark Kvamme is currently listed as a driver.