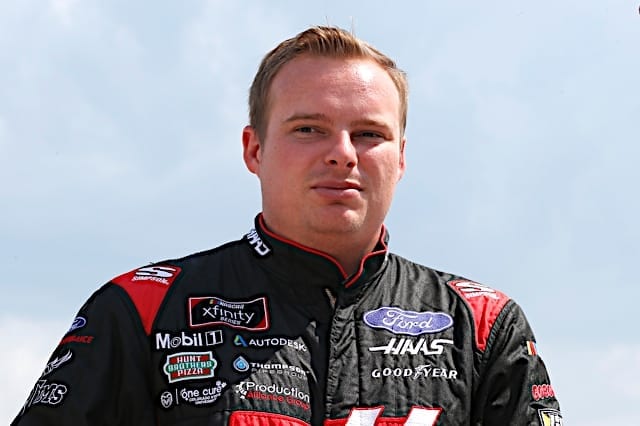 At the beginning of 2019, many people were wondering when Cole Custer was going to break out for Stewart-Haas Racing.

Through the opening five months of the NASCAR Xfinity Series season, he’s done just that.

Custer, 21, is in his third full-time season in the Xfinity Series with SHR. In the first two seasons, he had just two total victories, both coming in November of each year. But through 19 races in 2019, the California native has gone on a tear to claim five victories before August.

“It’s been going good,” Custer recently told Frontstretch of his season. “We didn’t know what to expect going into the year, but you start working together really well. Now we’re gelling together, and now, as we go back to tracks for the second time, we’re just going to get better and better.

“I would give us an ‘A’ right now. There are some tracks that I wish we ran a little better at, but for the most part, I think we’re happy with it.”

Happy indeed. All five of Custer’s wins came in a 13-race span this season between Auto Club Speedway in mid-March and Kentucky Speedway in early July. The No. 00 Ford even made a last-lap pass on Tyler Reddick in June to notch a victory, while dominating in three of Custer’s other four wins.

Why the success this season?

Over the offseason, SHR hired veteran crew chief Mike Shiplett to lead the No. 00 team. Jeff Meendering was Custer’s crew chief for the past two years before heading to Joe Gibbs Racing to work with Brandon Jones. Prior to joining SHR, Shiplett’s top priority was putting fast cars on the racetrack at Chip Ganassi Racing, where he won six races last year with Kyle Larson, Ross Chastain and John Hunter Nemechek.

Custer credits the addition of Shiplett as a big reason for the turnaround this season after having just two victories in his first 75 starts.

“I think Mike coming over was huge for our team — bringing new ideas and a lot of experience,” Custer added. “I think me, being in my third year, I know what I want in the car and how I want it to feel. I think I’ve gotten better at restarts, working traffic — just everything that comes during the weekend.”

All season long, Custer has been labeled as one of the “big three” in the series, in addition to Reddick and Christopher Bell. Custer and Bell both have five victories, tied for the series-high. Reddick has three wins, the last coming at Michigan International Speedway in June.

Like many other people, Custer believes it is a tossup between the three drivers as to who’s the championship favorite. But should the No. 00 team hit on a setup and have the perfect weekend, Custer believes he’s the favorite.

“I think if we show up to the track and do what we do best, have a lot of speed and don’t make mistakes, I think we are [the favorite],” Custer stated. “It all comes down to one race [Homestead-Miami Speedway], and obviously, there’s a long time until that race. We just have to keep moving forward and fine tuning on what we need to get better.”

Because of Custer’s breakout season, the discussion has begun as to what his 2020 plans will be. Since it’s his third year in Xfinity and he’s won five times this season, there’s little reason to leave him down for a fourth year, as it would essentially be a wasted year and could ultimately hurt the driver.

“I think I could do it,” Custer said. “There’s still a learning curve there, for sure. At this point, I think there are a few things I could work on to get better in the Xfinity Series. Obviously, the more laps and more experience you get isn’t going to hurt you. I think the three of us; me, Tyler and Christopher could probably do it. You have to be in the right situation and have to still learn once you’re up there.”

Over the past decade or so, there’s been a rush to move up the proverbial ladder as quickly as you can to reach the Cup Series. Custer, however, is happy to compete in the series to learn as a driver.

“I think when you’re a younger guy, you never exactly know when you’re ready,” Custer said. “That’s where it helps when you when you run more years in Xfinity. You have a better understanding of everything in the sport — from the tracks, to how the team works, to how you’re supposed to communicate with your crew chief, just everything involved.

“Some guys learn faster than others and have different mentalities and everything. But running a few years in Xfinity isn’t a bad thing, it’s probably one of the better things if you have the time and situation to do it.

“At times, you think you’re ready and you just want to go do it. But I think staying an extra year, doing whatever you have to do in the Xfinity Series, definitely helps you. Even if you feel like you’re stuck, it’s still going to help you in the long run as long as you get that opportunity in Cup.”

In 2018, Custer started three Cup races for Rick Ware Racing (Las Vegas Motor Speedway, Pocono Raceway and Richmond Raceway) albeit in SHR equipment. In those events, he had a best qualifying effort of 12th at Richmond with an average finish of 25.7.

Comparing RWR to SHR is night and day, but Custer still gained a ton of knowledge in the three-race deal.

“I think it helped me get a feel for what the competition level is like in that series, because it’s extremely high,” Custer said. “It’s probably twice as hard as the Xfinity Series is. You get a feel for that and what the mentality is when you show up to the racetrack and what you’ve got to do.

“I also got a feel for the cars and what it was like. I think the mentality and the competition level are the biggest thing that I got a feel for.”

Essentially, SHR has three Cup drivers that are free agents at the end of 2019. Per sources, Smithfield is expected to return with Aric Almirola, as is Arris with Daniel Suarez. Clint Bowyer, on the other hand, is in the last year of his contract, and speculation has risen about his future in the No. 14 after a rough summer stretch.

Driving in Cup is always more difficult than expected.

Cole Custer has had a breakout year in Xfinity this season. Meanwhile, Clint Bowyer (now in his contract year) has generally under-performed in the #14 in what used to be SHR’s flagship Cup team. However, I wonder if moving Custer up to the #14 would be a more business, rather than a performance-oriented decision.

The #14 Cup and #00 Xfinity teams (and Suarez’s #41 Cup team) have been largely funded out of Gene Haas’ pockets, who is also trying to keep a struggling, hyper-expensive F1 team alive. The key here is that Bowyer’s salary is probably up with other veteran star drivers, while Custer could be hired to drive the #14 for substantially less. In addition, Haas could shutter the Xfinity program and redirect those funds into improving the #14 Cup team. Of course, Ford would have a say in approving such a change, since they spent big money to lure SHR into their camp from Chevrolet several years ago.