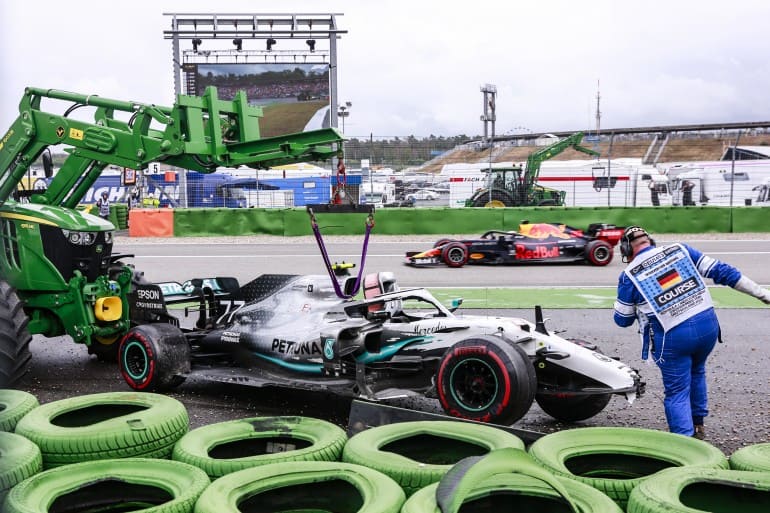 Valtteri Bottas bowing out of the German GP was a surprise (credit: FIA Images)

This past week’s Formula 1 race, taking place in Hockeheim, Germany, gave the season one of its most unpredictable and brightest moments of the year. The German Grand Prix was supposed to be a homecoming celebration for Mercedes, a chance for them to display their dominance in front of their home crowd and to further distance themselves from the field. That notion started off well with their drivers Lewis Hamilton and Valtteri Bottas looking at lights out from first and third.

Then the race began.

Under rainy conditions, the drivers followed the safety car for a number of laps before lining up for the usual standing start. Even then, things looked good, as Hamilton blasted off, Max Verstappen slipped from second, and Bottas slotted in behind. Good deal.

For the first half of the race, things were still looking good. Sergio Perez was the first to instigate chaos by spinning off the track and into the wall and bringing out the first Safety Car. Though Kevin Magnussen stayed out and gained incredible track position, Hamilton and Bottas whizzed by him just after the safety car pitted and the race resumed as would be expected.

The track continued to dry and the intermediate tyres came to life; twenty laps in there was little reason to believe the race would change. Daniel Ricciardo blowing his motor 12 laps in didn’t change anything either when the failure brought out a Virtual Safety Car.

The threat of rain encouraged the engineers to tell their drivers to make laps and be prepared for another stop. Carlos Sainz spun his McLaren off but managed to do something that few would on the afternoon by keeping his car moving and resuming the race. Verstappen followed just a handful of laps later. These incidents were the beginnings of a race starting to go crazy.

Lando Norris could not pull off the same maneuver and brought out a VSC. Then Ferrari’s meltdown of a season continued with Charles Leclerc beaching his ride and having to walk away, even though he incurred no damage.

At this point, the race may have well started a gambling pool where the winner is whoever could guess who would crash next. The task seems easier said than done. Would anyone have guessed it would be Hamilton? One of the best drivers in the wet, ever?

Sure enough, Hamilton spun, clipped his front wing, kept things going, but had to pit. In doing so he traveled on the wrong side of the bollard into the pits and gained a five-second penalty — all while enduring a super slow pit stop as his team was not prepared for his visit.

So what does make for a good race? The BBC’s Jolyon Palmer claimed that the German GP to be a classic, one that was a fix for much of the season’s woes. The ESPN F1 site followed their lead claiming the same thing. Ross Brawn, coming from the FIA, said that the excitement was a cure for the boring races that fans have complained about. You would have thought you had watched the most spectacular race in the world from these comments.

Really, what we got was what is often needed and what the rain can do – shuffle things up. For a change, both Mercedes made errors that cost them the win. Hamilton setting himself back was outdone by Bottas killing his car in the same spot, the last corner of the lap.

But look at how the rain brought different strategies? At one point, Nico Hulkenberg looked like he would stand on the podium at his home GP — that is a strange statement to make and one no one would believe if it were written prior to the race. (Hulkenberg crashed out as well.)

In fact, if you look at the podium, the top two, Verstappen and Sebastian Vettel, actually played things safe.  They never pushed what tyres they were on, kept a familiar processional, and seemed to wait for the race to open up to them. Vettel began the race in 20th, and as he should in a Ferrari, made it into the top 10. Once there, he stalled out in eighth.

Then everyone in front of Vettel started their spinfest and he just kept plodding along. By the time the race reached its conclusion, he had enough car left to dispatch the weaker competitors to take second.

Perhaps people are calling this race a classic not because it was, but because it represented a chaotic departure from what usually happens at any GP. Different cars came to the front. Good drivers lost control. The rain on the track made for treacherous conditions and a spectacle from the rooster tails coming off the tyres.

For a change, Mercedes looked vulnerable, truly vulnerable, and no one has seen that in the last five years. Maybe that is all anyone wanted.

You may be right but it was probably the best race to watch of the entire year.

I’m glad you pointed out Vettel’s second place because cars that would have finished ahead of him made mistakes and finished behind him. Hamilton, Bottas, and Leclerc screwed up and cost themselves positions. The race proved again how much faster some drivers are in the wet and some drivers aren’t as fast.

Since TV is the major source of revenue these days makes you wonder how long Nascar can avoid doing road courses in the rain.

BTW: did you see that the stewards had the gonads to actually slap a team with a meaningful penalty? None of this wrist slapping that we have grown to know and love in Nascar.

These days any F1 race that isn’t a Mercedes led parade is great (and rare).