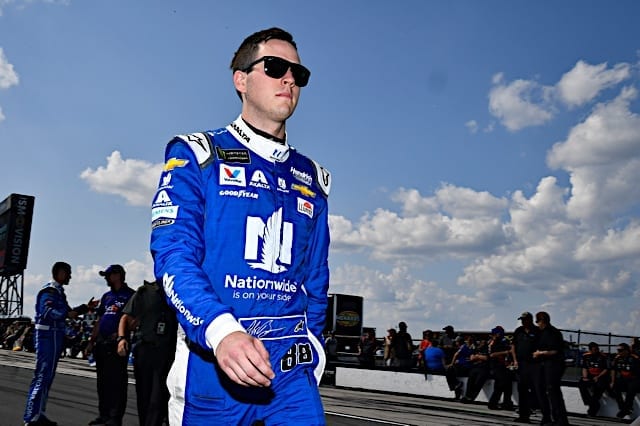 In this week’s edition of the Frontstretch Podcast, Dustin Albino and Mike Neff discuss an interesting weekend of racing at Pocono Raceway, which saw Denny Hamlin record his third victory of the season.

What’s led to the recent hot streak of the No. 11 team? With three consecutive top-three finishes, is Erik Jones fighting for his ride? Did the traction compound lead to a better race?

Following Pocono, Ricky Stenhouse Jr. and Kurt Busch weren’t pleased with one another, nor was Daniel Suarez happy with Bubba Wallace.

It wasn’t a slow news week, as Jimmie Johnson is getting a new crew chief in Cliff Daniels, who previously worked as an engineer of the No. 48 team. Team owner Richard Childress says Tyler Reddick will be moving up the Monster Energy NASCAR Cup Series in 2020, but doesn’t know if it will be for RCR. Also, a video circulated of Tony Stewart getting in an altercation with a race fan at a local dirt track over the weekend.

Ross Chastain and Chase Briscoe were victorious in the Gander Outdoors Truck Series and the NASCAR Xfinity Series races over the weekend. We talk in-depth on if we believe Chastain is the championship favorite in the Truck Series and what’s led to success for Briscoe recently.

Finally, Alex Bowman chatted with Albino over the weekend in Pocono to discuss his 2019 season, preview the playoffs and, most importantly, talk dogs.