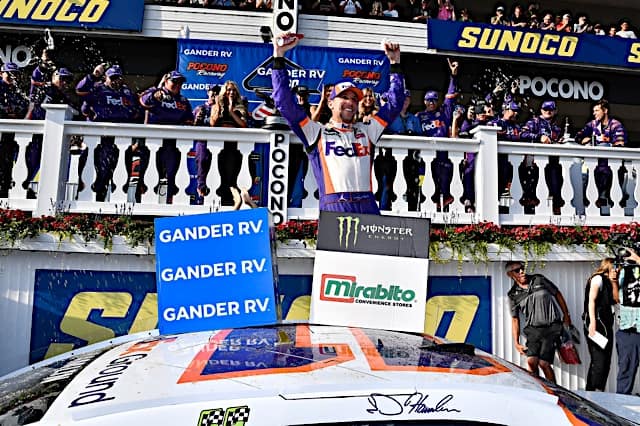 When most people think of the racing at Pocono, they think of a snooze fest or a boring afternoon where the cars run single-file after the first few laps of a restart.

But this past Sunday was not the Pocono we have seen for the past few years.

With the addition of the PJ1 surface and the threat of rain in the first half of the race, followed by fuel conservation in the second half, the racing was two and three wide for multiple laps. When it was all said and done, it was Denny Hamlin in victory lane, earning his fifth victory at Pocono and his third this year.

Kevin Harvick and Kyle Busch both had solid cars (Harvick’s more gnarly than Busch’s) but both played a different fuel strategy at the end and had to settle for top ten’s on Sunday afternoon.

How did all of this impact this week’s power rankings? Find out below.

For Busch, it looked like he had the dominate car in the early stages, but like last week, he faded and went with the wrong strategy, having to ultimately settle for a ninth-place run.

“Not the strongest day in Pocono, but could have been another win without his pit strategy going awry. C’est la vie.” – Aaron Bearden, Motorsports Beat

For Hamlin, the tech Gods delivered. After finishing second to Harvick last week, Hamlin went one spot further and won in Pocono for his third win of the season and the fifth at Pocono. Whatever Hamlin did this year that he didn’t do last year, he probably should continue, because 2019 has been a resurgence for Hamlin and the No. 11 team.

Somethings never change. We miss you JD. So happy for my whole @FedEx team for getting it done this weekend. It’s no accident. Hard work pays off. Thanks everyone for the congrats messages. ??? pic.twitter.com/R5Evmf3tr2

“He’s been overshadowed a bit by teammatez Busch and Truex, but Hamlin is quietly delivering a strong season for Joe Gibbs Racing. Sunday’s win was his third-consecutive top five, making it the second time he’s managed three or more in succession this season. ” –Bearden

It was a solid day for Truex as he completed a one-two-three finish for Joe Gibbs Racing. If the caution would not have come out for the No. 53, would Truex have been able to save enough fuel to steal the victory? We will never know.

It was a relatively quiet day for Logano. He wasn’t completely out of contention but also wasn’t one of the front runners that was contending for the win the entire race. When it was all said and done, he ended up in the 13th position.

Early in the weekend, it looked like Harvick was going to have a gnarly weekend. With Gen X all over his car, he was up in the front for most of the day. But like Busch, the wrong pit strategy cost him some track position and he was unable to make up the time.

Gnarly for @KevinHarvick this weekend pic.twitter.com/aVAFIru0Jp

Like teammate Logano, Keselowski had a solid run but didn’t have the speed for the leaders at the very front to challenge for the win. He did earn eight stage points that will help him for the time being. Decent weekend for the No. 2 team.

However, like the rest of us, we too, were intrigued by the caution that wrapped up the field.

Anyone got any information on what happened here?!?!

It looked really bad but I don’t have all the facts yet… https://t.co/gAsfya2PPE

While he was trying to track down his Joe Gibbs Racing teammate for his first win of the season, Jones simply ran out of time and had to settle for second.

On the bright side? He has a 39-point cushion over the final playoff spot which is currently held by Clint Bowyer.

It was a rough day for Busch as he was mired back in the field most of the day, then got turned by Ricky Stenhouse Jr after the caution that bunched up the field. The drama didn’t stop though, as Busch took to Twitter to share his thoughts on Stenhouse.

After sleeping on it I’ve decided to take the high road with the Stenhouse incident. Hopefully he won’t wreck me up there as well.

It has been a productive few weeks for Blaney as he notched another top ten for his group and for Team Penske. Even though he doesn’t have any wins on the season, his time will come sooner, rather than later.

Damage repair for Ryan @Blaney and the @moneylionracing Ford team after contact with the 41 and a flat tire in turn 3.#NASCAR pic.twitter.com/L54hY0zKGb

Like Blaney, it was a solid day for Byron. Even though he had to come from the back of the field after failing pre-race inspection, he marched his way up and scored a fourth-place finish. Second best finish for Byron of the year and his career to date.

4th for us this weekend. Proud of how our team is handling adversity. Started in the back 4/5 weeks and continuing to gain. pic.twitter.com/aywDIv1XEv

It has been a rough couple of weeks for Larson. For the second straight week, the No. 42 team had to turn to their backup car as Larson wrecked their primary in practice. However, the frustration disappeared after a yellow for the No. 53. Larson was able to take advantage of the ensuing restart and rallied to score a top five.

Solid day and effort for the No. 42 team.

Have given my guys WAY too much extra work these last couple weeks but man they’ve prepared some great cars. Another backup car with what I felt was winning speed. Hopefully I’m done crashing and we can take one of these primary cars to victory lane!!

It was a non-eventful day for the No. 10 group of Almirola as he didn’t have the best car, but he did the best he could with what he had. He got eight stage points and ended up finishing 12th.