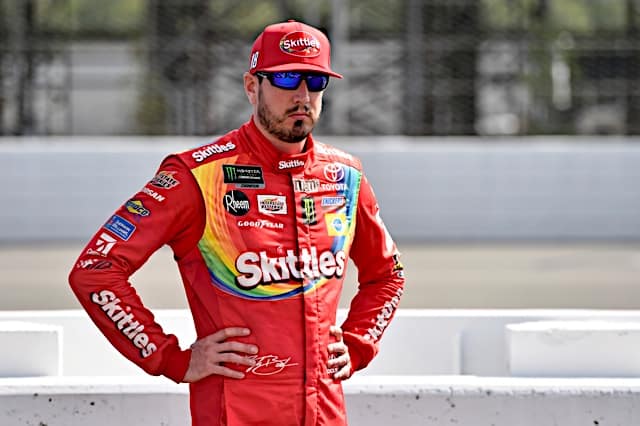 This will be their second road course of the season, and the cars will have the higher horsepower package without aero ducts. Just like last week, Cup practices and qualifying are on Saturday and pre-race tech inspection Sunday. Be sure to check whether any drivers in your lineup fail inspection; they could provide a boost to your score.

There are only 90 laps in this race, which means you only have an extra possible 22.5 DraftKings points for laps led. Still, it helps to have drivers who lead laps in your roster, especially if that lap leader wins the race. As usual, DraftKings awards a half a point for each fastest lap. At Sonoma Raceway earlier this year, the winner was also the fastest, having 21 fastest laps. Finally, remember that sometimes some value comes from mid-pack of the field. This might be where you get the most bonus fantasy points, which could help you cash your contests.

Here are the rules for DraftKings 2019 NASCAR season.

Kyle “Rowdy” Busch has done very well on this fast road course. Just two finishes were poor, with top 10s in all the other races. Additionally, he’s the only driver with two wins at the Glen, in 2008 and 2013. He’s led 247 laps here across 14 starts, including 52 in the past couple of years.

He is definitely a road course ace, as evidenced by the race at Sonoma in June. Busch finished second to his Joe Gibbs Racing teammate Martin Truex Jr., though he wasn’t too far behind him. So far this season he has four victories, 11 top fives and 18 top 10s, and ends each race on average 7.2. Unfortunately, he is the most expensive driver on DraftKings, so you will need some bargain-priced racers if you want to use him. His history suggests he would be worth it.

While Truex doesn’t have as many top 10s as his cohort at this track, he did win this race two years ago and has three straight top 10s. He hasn’t led very many laps here but could still produce near his fantasy value if he wins. In 2018, he battled with Chase Elliott in the closing laps but came up short on fuel. If he and crew chief Cole Pearn can manage his fuel throughout the race, he has a good chance to win Sunday.

As mentioned previously, the 2017 champion hoisted the trophy for the third time at Sonoma earlier this year. He is tied with Busch for the most wins this season and has eight top fives and 13 top 10s. At that Sonoma race, he had 21 fastest laps and led 59 around the circuit. That helped increase his DraftKings score to 78 points, and he could have a similar result this weekend. Of course, that’s only if he can stay out of harm’s way.

“That Jones boy” may have run only two races here, but he didn’t finish outside the top 10. Last year he finished fifth after starting ninth, and he earned the eighth spot at Sonoma earlier this year. Jones has seven top fives (including the past three races) and 11 top 10s, as well as an average finish of 13.6. While he is still searching for a way to join his colleagues in the win column, I wouldn’t count him out at Watkins Glen. If he starts further back like he did at Sonoma (32nd), he could earn around the same amount of fantasy points. Look for him to continue the momentum from the past few weeks and help you get above the cash line.

Another racer with a small record at the Glen, Suarez only has top-five finishes thus far. He was on the podium in third in his first Cup start in 2017 after qualifying fifth. Last year, he began the race 21st but worked his way through the field and played a great strategy to earn a fourth-place finish. If he performs this way again, he could help you cash your DraftKings contests. He just needs to avoid pit road problems like the kind that occurred at Sonoma this year. Suarez was running in the top five at the midpoint of the race, but had to perform a pass-through after a tire violation on his last pit stop.

Continuing this trend of young drivers with finite starts is William Byron. He ended this race last year eighth after starting 16th. He also gained five spots and finished 10th in the Xfinity series race here in 2017. Earlier this year, Byron began the Toyota/Save Mart 350 on the front row and led 21 laps. However, he played a different strategy than Truex and was ultimately relegated to a 19th place finish. He did finish fourth last week at Pocono. If he can carry the same speed he did at Sonoma, he might perform a similar feat to the one his Hendrick Motorsports teammate Chase Elliott pulled off last year at the Glen.

McDowell only has three out of 10 races where he’s finished higher than he qualified at this course. One of those came two years ago, where he had his best finish of 12th. Including that event, he’s on a four-race streak of top 20 finishes. This isn’t necessarily why I have him as my honorable mention, though. In 2016 in the Xfinity Series, McDowell won at Road America. At Sonoma in June, he started the race 13th, but had a few issues on track and came in 25th. Still, he’s fairly cheap and could offer some value if he doesn’t crash.

Preece is pulling double duty this weekend, and while he doesn’t have an extensive history, he’s still a guy that can wheel his way around a road course. He finished fourth last year at both Watkins Glen and the Charlotte ROVAL in the Xfinity Series. Additionally, he earned an 11th-place spot after qualifying 25th at Road America for JD Motorsports.

This year in the Cup Series, driving for JTG-Daugherty Racing, he has one top five and two top 10s, both at the superspeedways. Even though he doesn’t have great finishes, if he qualifies 20th or below, he could finish higher than that. His bargain price makes him a great fill-in for your DraftKings lineups.