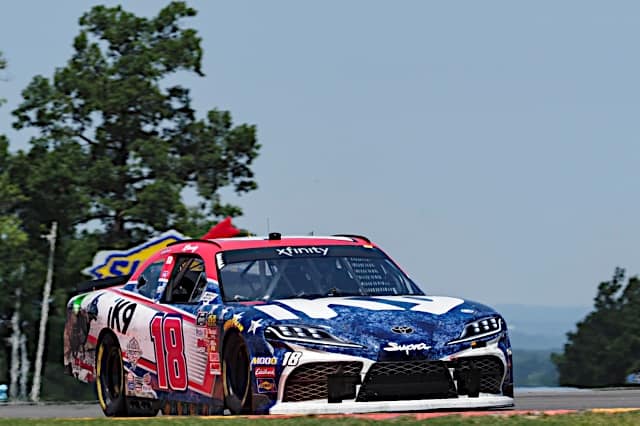 Whenever Kyle Busch is entered in an Xfinity Series race he’s going to be the favorite. On Friday (August 2) at Watkins Glen International, the No. 18 team swept the two practice sessions in preparation for Saturday’s (August 3) Zippo 200.

Early in opening practice, Busch laid down a lap of 121.259 mph, close to three-tenths of a second ahead of Ryan Blaney in second (120.804 mph). Blaney is making his first start in the Xfinity Series this season.

Road course ace AJ Allmendinger was third on the board with Kaulig Racing (120.272 mph), making his second start of the season. Austin Cindric (120.155 mph) and points leader Tyler Reddick (120.026 mph) rounded out the top five.

Custer’s practice didn’t go smoothly, though. Roughly halfway through the session, the No. 00 car over-corrected coming out of turn 1, smashing the outside wall.

Chase Briscoe turned 21 laps, the most in the session. No teams made a run of at least 10 consecutive laps.

For the second consecutive practice, Busch was quickest, improving his speed to 121.862 mph, close to three-tenths ahead of Haley in second (121.374 mph).

Both Cindric and Bell turned 33 laps on the famed road course, the most in the practice session. Gragson, John Hunter Nemechek and Brandon Jones were the only other drivers to turn more then 30 circuits. Three drivers made a run of at least 10 laps, led by Cindric at 120.340 mph.

Qualifying for Saturday’s Xfinity race is on Saturday at 11:30 a.m. ET, live on NBCSN.

So, another Xfinity race turned into a KB showcase, relegating everyone else to non existence. Oh joy. Why bother watching?

Thought that jackwagon was done for the year.

And for the record Ryan Blaney is a jack hole too for dropping down.

Thanks for the update. Now I know not to even think about watching the Xfinity race this weekend.