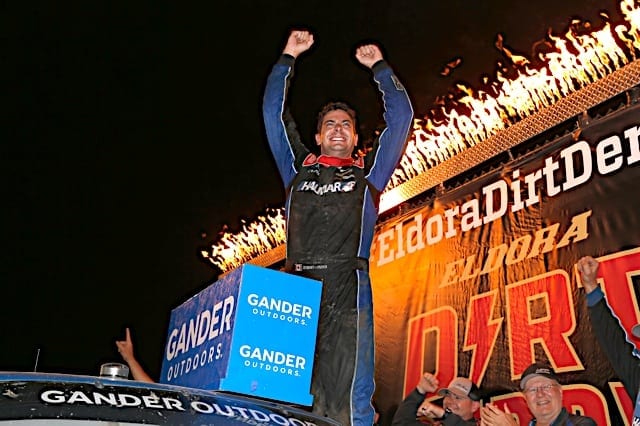 “Oh man, thank you to all the race fans that stuck with us,” Friesen said in victory lane. “Today, this is the day. This is the week. Thanks to everybody. This is meant to be. We needed to get it done on the dirt. Thanks to everyone. What a special event.”

The driver of the No. 52 Chevrolet led the final 57 laps and outlasted a two-lap dash to the finish to beat rookie Sheldon Creed by 0.728 seconds in the Eldora Dirt Derby. Grant Enfinger, Mike Marlar and Todd Gilliland rounded out the top five.

“Definitely a solid day, but solid days don’t cut it at this point,” Gilliland said after posting his fifth top 10 in the last six races. “We’ve put ourselves in a bad points position and we’ve got to deal with it. Today, I felt like we had a truck that could compete for the win; it was just about getting in the right lane. All the little details that I should have been a little better at. It’s all a learning curve.

“I’m really happy with the race we ran. I just wish we could have finished it off better because we ran better than fifth.”

Christian Eckes ended up sixth in his first start at Eldora. Meanwhile, defending winner Chase Briscoe, who led the first practice Wednesday evening, won his heat race, started on the pole and led the first 93 laps ended up seventh. Tyler Dippel, Tyler Ankrum and Matt Crafton rounded out the top 10.

They say the first burnout is always the sweetest,
(and in this case, the dustiest).@StewartFriesen | @EldoraSpeedway pic.twitter.com/uIsfxfwK6p

The Big One… on Dirt?

Right around the middle of stage two, Christian Eckes spun, something we expected to see out of multiple drivers throughout the race. But what was unexpected was the melee that spin set off.

Hill, who suffered back-to-back DNFs for mechanical failures at Kentucky (motor) and Pocono (clutch) got the worst of the contact, which ended his day on the spot.

“The 51 (Christian Eckes) started spinning and it’s so dusty out there that I didn’t even know that he was spinning until my spotter said something,” Hill said as he attempted to explain what happened. “I started getting on the brakes back a little past the flag stand and the next thing I knew I was getting hit from behind. You are on dirt; these things don’t stop on a dime, especially as heavy as they are.

“I kind of just got pushed straight into all the mess. There was really nowhere I could go there. Even if I wasn’t getting hit from behind, I don’t know if I could have turned down to miss it because I was already committed to run the top lane on entry. That’s where all the melee happened.

“I am not a dirt racer. I was just here to have fun,” Hill continued. “Especially since we are already locked into the playoffs, I was here to have some fun and see what I could do with it. I felt like we were making up some ground there. I know we only got up to like 16th or 17th, but I started getting the top rolling in pretty good and I was starting to feel a lot more confident running up there.

“We were going to stay out and see if we could get ahead of a few guys but the tow was knocked out so bad. We were nine or 10 laps down and we didn’t want to put more miles on the motor and possibly hurt something else. We will go back to the house and get ready for Michigan. I’m excited to go there and get back on pavement.”

Hill’s victory in the season-opener at Daytona International Speedway protects his spot in the playoffs, however, three straight DNFs isn’t the way any team would like to wind down the regular season.

Meanwhile, the rest of the drivers involved in the incident managed to race to the finish with varying degrees of damage. Eckes, whose spin triggered the whole mess to begin with, came out of the incident the best and raced his way to a sixth-place finish.

While Friesen celebrated his first career win, Ben Rhodes emerged from his truck and went after Tyler Dippel to express his displeasure. The two got together in the final couple of laps in contact that sent Rhodes hard into the outside wall. Then, after the checkered flag flew, Dippel rammed into the No. 99 Ford on the cool-down laps.

Of course, because the race ran over its timeslot, FOX Sports 1 only interviewed race winner Friesen, runner-up Creed and Marlar before moving on to MLB Whiparound, rather than following up with Dippel and Rhodes to gain a better understanding of what happened between the two.

Dippel was blunt and to the point when NASCAR.com caught up with him, though.

“It was green-white-checkered, it was time to go,” Dippel explained. “That’s all it was, it was time to go. He came up after me before I could even get out of the truck. Probably the only way he could do anything because he probably weighs 140 pounds soaking wet.

“He’s a (expletive). That’s pretty much just it. He complains about pretty much everyone every week. It’s probably going to be cool to see a person like him miss the playoffs in really good equipment.”

Meanwhile, for Rhodes, it was a culmination of a lack of “respect on the race track” that sent him over the edge.

“It was multiple guys on the track,” Rhodes said. “It’s just sad because nobody races with respect on the race track anymore. I didn’t touch a soul all night unless they were wrecking around me and I had to somehow touch them to get away from the wreck. Other than that, I didn’t touch a soul. I raced everyone with respect and the way that I wanted to be raced. We’re racing for a championship and there’s just guys that come here and just clean you out.

“I hate it for my guys. Things out of our control are taking us out of the playoffs.”

With just one race remaining to set the playoff field, Rhodes sits 63 points below the cutoff line and is in a must-win situation if he wants a chance to run for the championship this season.

Confusion in Setting the Field Under Caution

Despite the action on the track and the feel-good stories inside the top 10, what people will be talking about the most following this race is the number of laps wasted to reset the field.

The rules for Eldora include “quickie yellows” with no active pit stops thanks to the lack of a true pit road. But the field spent nearly half of the race (68 of 150 laps; 45.3%) under caution for just 12 cautions.

Interestingly enough, the Big One, which involved 14 trucks, only took eight laps to restart from. The single-truck spin of Kyle Strickler? 11 laps. 11! FOX Sports 1 reported the delays in a few of the restarts were attributed to lining up the field correctly.

Ultimately, the field restarted with NASCAR calling for Ben Rhodes to serve a black flag, something it rescinded a short time later.

UPDATE: The black flag on the No. 99 has been rescinded.

As you would expect, the fans in the stands could be heard booing on the broadcast as NASCAR attempted to make sense of which drivers belonged in which position, all while ticking away precious laps in the final stage.

Fans are booing because the lineup is completely unsettled lol

What I don’t understand is why NASCAR didn’t just stop the field and take the time to fix the lineup rather than wasting so many laps under caution. Sure, yellow-flag laps count in every other race during the season, so it makes sense that they would for Eldora as well. But this race already runs under a different set of rules for the starting lineup and pit stops, so where would the harm be in taking the time to reset the field correctly under caution without wasting laps on the way?

.@RossChastain goes for a ride in the gravitron and brings out the caution at @EldoraSpeedway! pic.twitter.com/Pf1BV18fKj

Sheldon Creed has been by the fence watching heat races. He might be without his crew chief, truck chief and engineer for Michigan-Bristol-Canadian Tire if #nascar determines tungsten came out of his truck during practice yesterday. No penalties announced today. pic.twitter.com/S8NPm0hSdS

Number of Rookies in the Race: 5

Points Update: Grant Enfinger expanded his point lead to 52 markers over Matt Crafton, who moved up one position, and will clinch the regular-season championship by finishing stage one at Michigan International Speedway seventh or better. Stewart Friesen also moved up one spot to third on the strength of his win plus results of sixth and second and stage one and two, respectively. Brett Moffitt dropped two positions to fourth following a disappointing 29th-place finish. Ben Rhodes rounds out the top five.

Following a rough outing that saw him involved in a pair of incidents before scoring a 31st-place finish, Harrison Burton dropped to sixth and is followed by teammate Todd Gilliland. Sheldon Creed’s runner-up finish, combined with Austin Hill’s early exit saw the two swap spots in the standings. Creed and Hill sit eighth and ninth, respectively, and Johnny Sauter rounds out the top 10.

Six race winners this season means only one driver will point their way into the playoffs. Enfinger holds a solid lead and will likely win the regular-season championship to join winners Tyler Ankrum, Ross Chastain, Friesen, Hill, Moffitt and Sauter. Crafton holds a 63-point advantage over teammate Rhodes and will only drop out of this year’s playoff field if a driver below the cutoff line wins at Michigan International Speedway.

Not the only time you'll see them four wide tonight. pic.twitter.com/6SiiIggcZv

P5 tonight, ran upfront just the bottom wouldn’t fire on the restarts and get behind! Learned a lot and got a lot better from the start. Momentum going forward. @JBLaudio @ToyotaRacing pic.twitter.com/lw2KSvPsY9

P6 at the end. Had to fight through a lot to get there but really proud of the @Mobil1 @KBMteam for their effort! Learned a lot throughout the night

Up Next: The Gander Outdoors Truck Series heads to Michigan International Speedway next weekend to run the final race and set the playoff field. Coverage for the Corrigan Oil 200 begins at 1 p.m. ET on FOX Sports 1; the race can also be heard on your local MRN affiliate or SiriusXM NASCAR Channel 90.

Now this was racing as many of us probably grew up with. Why can’t NASCAR get back to racing like this? Most of us grew up on watching short track racing with guys giving it all they have in a few different grooves. Now we are stuck with a steady diet of 1.5 mile and greater single groove tracks with IROC cars.