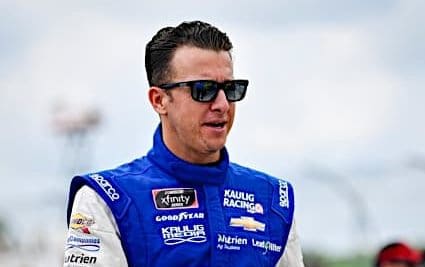 BREAKING: AJ Allmendinger has been disqualified after his car failed the post-race inspection for rear-height violation. The second-place finish has been thrown out, and he is instead credited with a 37th place. Christopher Bell is now credited with second place.

I can go into a full description of why it was low from contact early in the race on a restart. The issues we struggled with after cause track bar mount was bent and oil tank getting hung on the coil of the spring the rest of the race. But just doesnt f***ing matter. ???? https://t.co/pUx2OI6yJM

AJ Allmendinger continues to impress in his part-time schedule for Kaulig Racing. After a ferocious battle with Austin Cindric on the last two laps involving multiple bump and runs, Allmendinger finished second to Cindric at Watkins Glen International on Saturday afternoon (Aug. 3).

Allmendinger won the second stage of the race, led 24 laps and appeared to be riding off into the sunset. But Cindric, who had 15-lap fresher tires, caught up to Allmendinger in the waning laps.

Cindric bumped Allmendinger out of the way once, then Allmendinger returned the favor. Allmendinger then missed the corner on the final lap, allowing Cindric to win.

“His car was going so much better on fresher tires,” Allmendinger said. “I knew he was gonna nudge me and I was gonna wait to see how much he nudged me, and that’s how I was gonna do it in return if I got the chance. He bumped me a little bit, and I repaid the favor into the left-hander there. But I got in there, because I got wide, I got even more dirt on the tires. So I didn’t expect to get so loose in the last corner. He got under me, and that was it.”

It would have taken a dump and run for Allmendinger to get back around Cindric for the win, and the 2014 Monster Energy NASCAR Cup Series Watkins Glen winner chose not to do that.

“If I could make a run down the back straightaway, I was going to, but I wasn’t going to go in there and send it,” Allmendinger said. “He didn’t deserve that. He raced me fairly clean, and I paid it one time. That’s how I looked at it: I had one chance to pay him back. I did, and he held onto it. He deserved the win.”

Allmendinger might have cruised to the win, but a late-race incident between Christopher Bell and Justin Allgaier allowed Cindric to soar past several cars to the second position. This saved Cindric the trouble of having to work his way through the field, and he likely wouldn’t have had enough time to catch Allmendinger had that not happened.

“When I saw them wreck behind me, if we stayed green, I knew we were gonna be okay,” Allmendinger said. “But the problem was the No. 22 was the one that got clear of it all. That was the one I didn’t want to see because he was already quick and had fresher tires. I tried not to make any mistakes, and I feel like I didn’t make any mistakes for him to get to me. He just was that much better with fresher tires.”

Allmendinger, who lost his Cup ride at the end of 2018, has spent this season as an analyst for NBC. He signed a deal with Kaulig Racing earlier this season to race at Daytona International Speedway and the road courses on the Xfinity schedule. Only running a part-time schedule meant the heat took a bigger toll on him.

“I got TV body,” Allmendinger said. “I’m not used to this heat. It’s hot. I work out a lot still, but you can’t simulate getting in one of these cars, dealing with the heat and going through a battle like that. So I was definitely spent, but those last two restarts, I was going to give everything I had.

“I’m disheartened for not winning, but we had a lot of fun.”

Allmendinger finished third in his first outing with Kaulig, but the finish was thrown out after failing post-race inspection. The second-place run was a solid bounce back, but it is also a much-needed pick-me-up for the team mourning the loss of crew chief Nick Harrison.

“Nick Harrison is going to be missed … we were hauling balls,” Allmendinger said, quoting the phrase Harrison would commonly say.

Allmendinger said his most important race of 2019 is next week at Mid-Ohio Sports Car Course, home track to team owner Matt Kaulig and sponsor LeafFilter.

Damn, what the hell is wrong with these people! Is this not the second time in a short period of time? Ain’t AJ’s fault at all! Fuck you idiots! This guy does have the talent to continue to make a living! You morons it seem not! Sad for AJ! ……………..AGAIN!