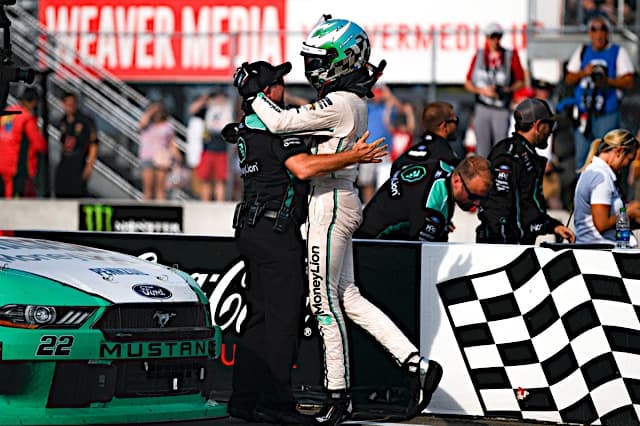 In what was a back-and-forth affair in the final two laps, Austin Cindric beat AJ Allmendinger to win his first career NASCAR Xfinity Series race at Watkins Glen International on Saturday afternoon (Aug. 3).

Cindric and Allmendinger battled vigorously, exchanging the lead multiple times in the final laps via bump and runs, with Cindric gaining the upper hand on the final lap for his first ever win.

“This is incredible,” Cindric told NBC. “We talked before the weekend and we knew something had to go wrong with the [No.] 18, but this MoneyLion Mustang, everybody that puts this program together, I am just so blessed to be here.”

Allmendinger finished second, but was disqualified after his car failed post-race inspection for improper rear-end height. He is instead credited with a 37th place. Prior to the disqualification, Allmendinger was disappointed, yet thrilled for Cindric.

“We were pretty close on speed overall. I was trying to get the lead on the restart and I saw nobody behind me,” Allmendinger told NBC. “I said this is going to work out perfect and then I saw the 22 behind us and said that is the only car I don’t want behind me. So congrats to Austin. That whole [No.] 22 team, him, especially.

“He went into the esses and nudged me and I nudged him, you know you race how you get raced. We both tried to be really clean with each, and I think that is what racing is all about. Congrats to him, he was on it the whole race and he drove the wheels off to get past me.”

Christopher Bell finished third, followed by Justin Allgaier, who had more than an eventful day, and Ryan Blaney rounding out the top five. But every driver from third on back had their finishing position improved by one spot due to Allmendinger’s failed inspection.

For the first time this season, Kyle Busch led the field to the green flag in the Xfinity Series. This was his first pole of the season and the 16th consecutive year he has won a pole in the Xfinity Series. Busch led from wire to wire the opening stage, and though he was challenged on the restarts, he would always clear the field by the time he got to to the carousel.

There were a couple of notable incidents that occurred in the first stage including one on the first lap. Tyler Reddick got into the grass and overshot the carousel, which required him to stop and go. He later had to come in and pit to get the grass off of his grill.

Tyler Reddick slides through the grass on Lap 1 at @WGI!

Allgaier went for a spin off the nose of the No. 4 of Ross Chastain, who turned the JR Motorsports driver into the fence.

Seein' red.@RossChastain gets into @J_Allgaier to bring out the latest #XfinitySeries caution as the No. 7 gets sent to the tires. pic.twitter.com/wJEsJTqU6V

Allgaier got his revenge on Chastain, though, on the final lap of the first stage, Allgaier got into Chastain, slamming Chastain’s No. 4 car into the tires. Chastain told his team on the radio that, “I will handle it. Nobody else needs to do anything.”

Bell started out front of stage 2 as Busch went to pit road during the stage break. Blaney took over the lead on the ensuing restart, and like Busch, Blaney quieted pulled away. Busch, meanwhile, started in 15th and was all the way up to ninth within a few laps.

With 10 laps to go in the stage, Busch was up to second and was told by his team to “go chase him.” Busch did so and got the lead from Blaney heading into the carousel, but when he was heading out of the carousel, Busch’s car broke and went off course.

Busch radioed to his team, telling them, “I don’t know what, but I got something broke in the left front suspension.” It ended up being a broken control arm on the No. 18 Toyota Supra. Busch tried to get it fixed but ended up having to go to the garage, and his day was over. Busch finished 32nd.

"That's the international sign for not good."-@SteveLetarte@KyleBusch's day may be done and this #XfinitySeries race is wide open. Watch live on @NASCARonNBC >> https://t.co/s077t6vDSx pic.twitter.com/FJjuJii9PN

Allmendinger won stage 2 and led the third stage until he had to pit for his final stop with 34 laps to go. That gave the lead to Allgaier until he pitted with 19 laps to go. Cindric inherited the lead and held the top position until the caution waved for debris in the inner loop with 14 laps to go.

The fun didn’t stop there, as on the restart with a 10-lap shootout, there was a melee involving Justin Haley, Josh Bilicki and more to have the yellow wave once again.

The fun continued on the final restart with Bell making a huge save in the esses as he got connected with Allgaier. He made a big-time save and ended finishing fourth.

Next up for the Xfinity Series? The second of three road courses in the month of August, as the series will head to Mid Ohio Sports Car Course next weekend.

Not a bad race after Busch went out with his trouble.

Not an Austin fan after seeing what he did to win his truck race. This time he race clean and earned his win like a real race driver and not a punk driver.