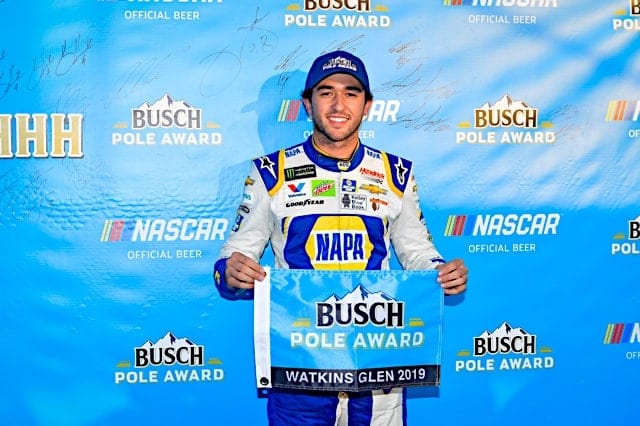 Since Chase Elliott‘s No. 9 Chevrolet unloaded off the hauler on Saturday (August 3) at Watkins Glen International, it’s been the class of the field.

In qualifying for Sunday’s GoBowling at the Glen, Elliott put down a speed of 127.297 mph, edging out Hendrick Motorsports teammate William Byron for the pole (127.144 mph). It’s Elliott’s third pole of the season (Bristol Motor Speedway and Dover International Speedway), while Byron is sitting on the front row for the eighth time this year.

The lone incident in qualifying came in the first round, when Erik Jones blew a right front tire entering turn 1. Because the No. 20 Toyota hadn’t taken an official time, NASCAR allowed the team to change the tire. When going back on to the track, Jones posted the 14th quickest time.

“It was kind of messy,” Jones said of the session. “It’s not what we want but we had an OK effort. 14th is probably not where we should have qualified. I felt like we had a top five car. I just misjudged my braking point on the first run, locked the tire up enough to blow it out.”

With five races remaining, many of the drivers racing near the playoff bubble will come from mid-pack. Clint Bowyer starts 13th, the first driver to miss the final round of qualifying. Daniel Suarez was mired back in 18th, but Ryan Newman will come from deep in the field at 25th.

The green flag will wave shortly after 3 p.m. ET on Sunday (Aug. 4), with Elliott coming into the race as the defending winner. He had to hold off a hard charging Truex in the final laps last season to earn his first Monster Energy NASCAR Cup Series victory.

Full Starting Lineup for Sunday’s GoBowling at the Glen