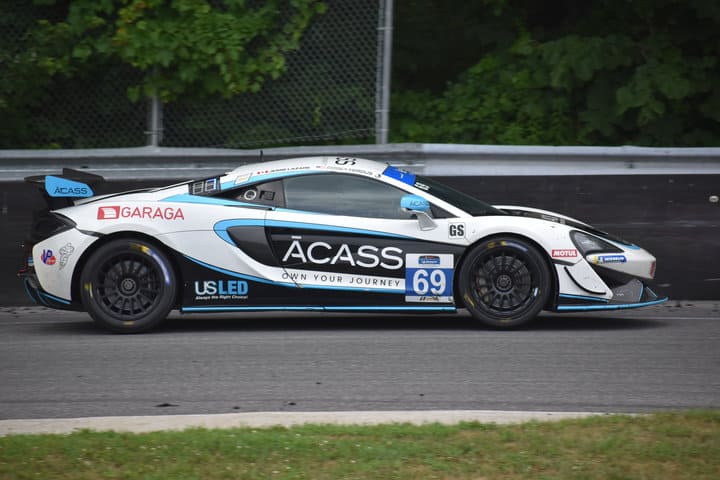 Motorsport In Action’s Jesse Lazare was fastest overall in Michelin Pilot Challenge practice (Aug. 2) at Road America with a lap at 106.135 mph.

In the morning practice session, it was Park Place Motorsports’ Trent Hindman that was fastest overall in his Porsche Cayman GT4 MR with a lap at 105.931 mph.  That lap was three-hundredths of a second faster than Akhil Rabindra in the No. 09 Aston Martin for Automatic Racing.  Rabindra is making his Michelin Pilot Challenge debut.

Motorsport In Action’s Corey Fergus was third quickest in his McLaren, followed by the Ford Mustang GT4 of Jade Buford.  CarBahn Motorsports’ Tyler McQuarrie was fifth in his Audi.  TeamTGM’s Owen Trinkler and Guy Cosmo were sixth and seventh, while Murillo Racing’s Eric Foss was eighth.  Stephen Cameron Racing’s Greg Liefooghe and KohR Motorsports’ Kyle Marcelli rounded out the top 10.

Unlike WeatherTech practice, the first Michelin Pilot Challenge practice session was not clean.  The session ended early due to a big crash for Justin Piscitell in Murillo Racing’s No. 65 Mercedes.  Piscitelli spun in turn 7 and went hard into the tires, rolling over in the process.  Piscitell was ok, but the damage was far too severe for the team to repair the car on-site.  The No. 65 team’s withdrawal cuts the field down to 35 cars.

TCR saw Atlanta Speedwerks’ Todd Lamb fastest in class with a lap at 103.697 mph, good enough for 21st overall.  Lamb’s lap was two-tenths of a second faster than the Hyundai Veloster N TCR of Bryan Herta Autosport’s Mark Wilkins.  Third quickest was the No. 3 Alfa Romeo for Trenton Estep, a veteran of IMSA Porsche GT3 Challenge Cup for Jeremy Dale’s JDX Racing who is making his Michelin Pilot Challenge debut.  JDC-Miller MotorSports’ Stephen Simpson was fourth in his Audi, while James Vance was fifth in the Fast MD Racing Audi.

In the afternoon practice session, Lazare picked up the pace and turned in the fastest lap of the day.  Lazare’s lap was one-sixth of a second faster than CarBahn Motorsports’ Jeff Westphal in the No. 39 Audi.  Rebel Rock Racing’s Robin Liddell was third quickest in the sole Chevrolet Camaro GT4.R, while Buford was fourth and Trinkler fifth.  Foss was sixth quickest, while Cosmo was seventh.  Chris Green was eighth quickest in the new McLaren 570S GT4 for Andrew Wojeczko Autosport, while Marcelli was ninth.  Kenton Koch in the eEuroparts.com ROWE Racing Audi was 10th.

In TCR, Chris Miller was fastest in JDC-Miller MotorSports’ No. 17 Audi with a lap at 103.478 mph, good for 19th overall.  Miller’s lap was four-hundredths of a second slower than Lamb.  LA Honda World Racing’s Tom O’Gorman was third fastest in his Honda, followed by Simpson and Harry Gottsacker in the No. 21 Hyundai.