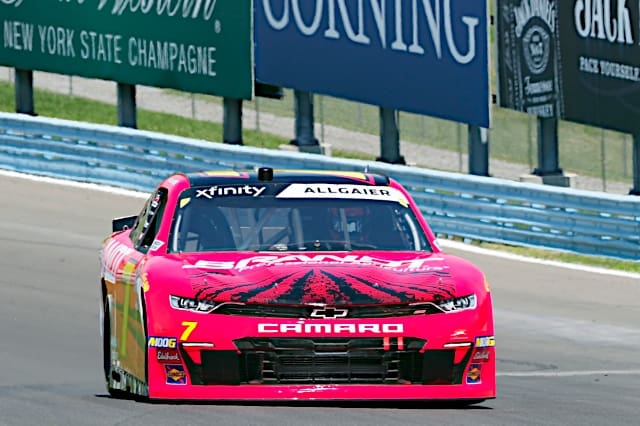 Heading into Saturday’s (August 3) Zippo 200 at Watkins Glen International, Justin Allgaier was one of the favorites, winning two of the four road courses last season.

But that came to a crashing halt on lap 15.

After pitting early in the first stage to get track position at the end of the stage, Allgaier and Ross Chastain were battling hard entering the bus stop on a restart. With a few bumps and a few bangs, Chastain sent the No. 7 spinning into the outside wall, junking the rear end of the race car.

By making three pit stops under caution, the Jason Burdett-led crew restarted in the rear of the field, though quickly catching up to Chastain. In turn 5, Allgaier returned the favor, sending the No. 4 into the tire barrier.

The Bus Stop is a tricky place at @WGI.

Ross Chastain gets into Justin Allgaier and sends him spinning into the barrier. @XfinityRacing pic.twitter.com/08Oshhwug5

“We’ve had a rocky relationship over our racing career,” Allgaier said after the race. “Unfortunately I’ve been on the receiving side a number of times of him running into me. He flat wrecked me in the bus stop back there. At some point you get to a point where you’re tired of getting run into, and so I ran back into him. I had no intention of putting him into the wall. I wanted to spin him out, for sure. I wanted him to have the same feeling that I did a few laps before whenever he spun me out, and I did it in a position where there was nobody else around us and made sure that if it was going to be a crash it was just going to be the two of us.

“He knew what he was doing when he got into the bus stop and wrecked me on purpose. Even when I caught him back, he slowed way, way down and he knew that I was mad at him. You can’t race like that and not have something come of it.”

The wreck into the tire barrier was enough to knock Chastain out of the race. The end result was a 34th-place finish for the No. 4 car, his worst finish in 16 starts this season.

Chastain was none too pleased.

“You don’t expect to get wrecked like that in a NASCAR national series event,” Chastain said. “Just racing hard, mistakes on all sides. I’m glad my nine-point safety harness did its job because I hit the wall a ton.”

Allgaier is known as one of the cleanest racing drivers in NASCAR. However, he admits he and Chastain haven’t always been on the same page, and he doesn’t think they will be with this incident, either.

“I don’t think we’re going to agree,” Allgaier stated. “He ran into my door down the backstretch into the bus stop, and then proceeded to hit me about three different times and spin me out into the bus stop on purpose – and try to put me into the outside wall on the exit of the bus stop. His idea of not the way you race at all, I think he should look in the mirror.

“That’s not the first time, either. You look at Daytona [earlier this season], I was completely inside of him and he cranked a left. Last year at [Las] Vegas, he put me in the fence trying to battle for the lead. There’s been multiple times that I’ve been on the receiving end. He can look at it however he wants to looks at it, but I feel like I finished it today.”

Over the final two stages, Allgaier’s team played the strategy game, leading 13 laps. The No. 7 Chevrolet took the checkered flag in fourth, his third consecutive top-five finish at WGI.

Algaier is a no talent ride buyer. Chastain has done far more with virtually nothing. Algaier could have backed out of the bus stop deal but chose not to, he put himself in that position and it’s lame to blame Chastain for what happened, there was fault on both sides. And then he goes and makes himself look like a petulant little beyotch with his no talent dump of Chastain. Little rich kid throws a hissy fit and dumps a real racer. That’s real talent alright.

Fans love it when things are settled on the track. Way to go “Alligator”!!!

Justin started this by entering the Bus Stop completely off the race track. Anyone entering a turn by not being on the racing surface is going to wreck. NASCAR needs to park these racers who intentionally wreck/demolish other drivers. It’s so obvious, not even a judgement call. Yet they are giving penalties/DQ for driving violations of inches. (pit stops) If I want to see this type of racing I will go to a demolition derby.

Except for the minor detail that the 7 entered the bus stop in the lead… He held his line, and left room. The trailing car has the choice: back out and live to race another lap, or force the issue in possibly the worst place on the track. He made his choice and thus the result.
I like the watermelon man and admire his aggression – but – anyone watching all three series and paying attention would notice he has run like a bull in a china shop through all of them… lots of very aggressive moves that are all fair in love and stock car racing, but likely not earning him many friends on the track. I suspect this was a very popular payback around the sport.