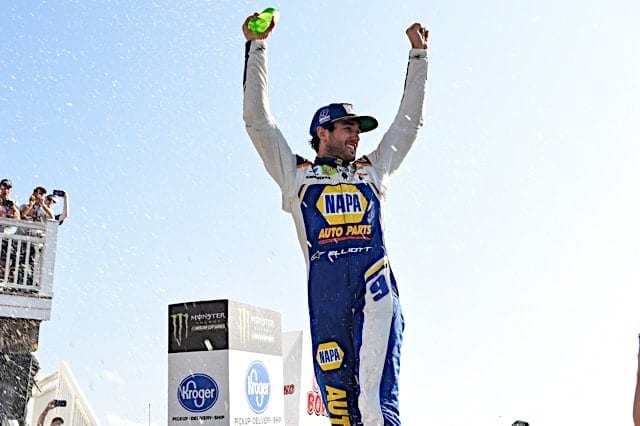 For a second straight year, Chase Elliott had Martin Truex Jr. breathing down his neck for the win at Watkins Glen International. But this time, Elliott didn’t need an empty fuel tank to maintain his advantage.

Elliott dominated the vast majority of Sunday’s (August 4) Go Bowling at the Glen, leading 80 of 90 laps in the Monster Energy NASCAR Cup Series race.  Truex was every bit of Elliott’s equal but ultimately came up short as Elliott held on for back-to-back victories at the western New York road course.  The two battled extensively for much of the race, pulling away by over 10 seconds during the final stage but Elliott, the pole sitter, used clean air to his advantage.

“Track position was king,” Elliott said after running his car out of gas doing victory burnouts. “I didn’t mess up into [turn] 1 this time, so that was good.

“Martin was really good. I thought he was maybe a little better than us [but] the guys stayed mistake free today. A good day on pit road, mistake free on the track. Nice to get out of the slide we were in. This past month and a half hasn’t been any fun.”

Elliott ended a six-race slump without a top-10 finish. One year after earning his first career MENCS victory he leaves Watkins Glen with his fifth.

Truex was left to settle for second, his sixth top-two performance in the last seven MENCS road course races. The No. 78 team clearly had pace but never could get to Elliott’s rear bumper in the closing laps.

“Just tried to force a mistake but [Chase] hit his marks,” Truex said. “His car was really fast in the key areas where we needed to be. We just were kind of stuck there.”

Starting from the pole, Elliott ran away from the field early on.  He held a lead of more than six seconds at one point en route to winning stage one.

Behind Elliott, there was some strife.  Kyle Busch spun in turn 1 on lap 2 after bumping into William Byron.  Busch took issue with the way that Byron raced him.  When he got back to Byron on lap 18, Busch hit Byron under braking for the Inner Loop, knocking the No. 24 into the grass.

Byron ended up with a grille full of grass.  During the stage break, Byron attempted to clean off his grille by rubbing it on Busch’s rear bumper.

"If I see the 18 come back here without you knocking the f**k out of him, we're going to have a problem" – Chad Knaus#NASCAR #GoBowlingAtTheGlen @WGI @WilliamByron radio saying front nose damage

Busch wasn’t having that and appeared to brake-check Byron.  The result was fairly substantial damage to the Hendrick Autoguard Chevrolet.  Byron would eventually finish 21st.

Kyle Larson took the lead by staying out at the stage break, but Elliott was able to regain the advantage when Larson pitted on lap 28.  A couple of cautions late in the stage, first for fluid from Reed Sorenson, then a crash in turn 5 for Bubba Wallace kept the field close.

In the final stage, emotions overflowed.  First, Jimmie Johnson spun and hit the barrier in turn 5 after contact from Ryan Blaney.  Johnson was highly incensed at Blaney, proclaiming that he was going to beat Blaney up on the radio.  Such a fight did not happen after the race, but Johnson and Blaney did have words on pit road.  Johnson ultimately finished 19th.

Shortly afterwards, Busch and Wallace got into a bumping match on the frontstretch while fighting for position.  Wallace ran Busch towards the inside wall before Busch slammed him back.  Eventually, Wallace spun Busch out entering turn 1. The spin itself didn’t damage Busch’s car, but the bodyslamming did.  Repairs dropped Busch all the way out of the top 30.  From there, he raced back up to an 11th-place finish.

The final round of stops with a little more than 30 laps to go did nothing to cool the battle.  The final 30 laps saw Truex drop back briefly, then make another run at the lead.  On the final restart, the two even had contact in the Esses.  However, Truex could never quite get to Elliott.

Elliott’s margin of victory was just under a half second over Truex.  Denny Hamlin was third, a full 11 seconds back.  Erik Jones continued his great form of late with a fourth-place finish, while Blaney ended up fifth despite the contact with Johnson.

Matt DiBenedetto quietly made a late charge to finish a strong sixth in his Procore Toyota, followed by Kevin Harvick and Larson.  Brad Keselowski was ninth, while Kurt Busch was 10th.