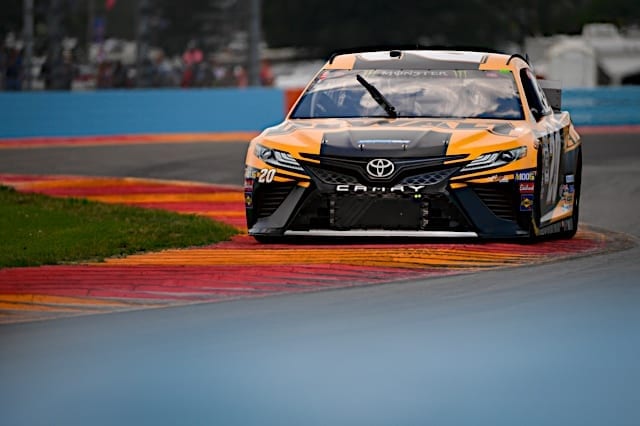 For Erik Jones, he entered Sunday’s (Aug. 4) Go Bowling at the Glen in a somewhat quiet place within Joe Gibbs Racing.

Kyle Busch, Denny Hamlin and Martin Truex Jr. were all considered to be favorites for the victory.  Meanwhile, Jones qualified 14th and looked decent in practice. By the end of the race, Jones was not so quiet, rising up to a fourth-place finish. The run is Jones’ fourth consecutive top-five finish.

“It was good. Fairly typical for us here [at Watkins Glen International],” Jones said on pit road after the race. “We knew that the DeWalt Camry was fast, we just didn’t start where we wanted to. Kind of took all day to work our way up to where we needed to be. I thought we could run in the top five, and we finally got there before the last restart. We didn’t have anything for [Truex] or [Chase Elliott].”

In the final stage, Jones was able to make some moves early on. A good final pit stop got him up to fourth.

While Truex and Elliott ran off to decide the race between the two of them, Jones was consistently one of the best cars toward the end of the race. It allowed him to gain on Hamlin for third late in the race, but he ran out of time to get there and make the move. Regardless, the fourth-place finish is Jones’ best career finish on a road course.

Given Jones’ background in late models on short tracks, he’s actually no slouch on a road course. In three starts at Watkins Glen, he has never finished outside of the top 10. He was fifth last year and managed to better that.

“We got some good points again,” Jones continued. “We’re in a really good spot now for the playoffs, which is a good feeling.  Going into Michigan [International Speedway] and Bristol [Motor Speedway], two places that I feel like we can win at, it’s a lot of really good momentum.”

This string of success could not come at a better time, as Jones is working to get an extension with JGR. With plenty of talent in the Toyota pool, including Christopher Bell, the urgency is on for Jones to perform.

The run of four straight top-five finishes has moved Jones up from 18th in points to 13th. He is now 54 points ahead of Jimmie Johnson and Ryan Newman, who are currently tied for 16th in points.

But will you keep this ride is the question.

I think it’s too little too late for Erik.

He should keep it…. he’s only 23 years old and obviously has mad talent. No disrespect to Christopher Bell. He’s obviously amazing too. I think the only real option for Toyota is to add another car over at LFR and develop a second, high caliber team. Look at Ford (SHR/Penske), Chevy (Hendrick/Ganassi). They have multiple teams for drivers while Toyota only has Gibbs. When you have no room for drivers like DiBenedetto, Bell, and Jones, you sacrifice losing them; much like when they lost Larson, Byron, and Gragson. I guess it’s easy for me to say though, I’m not flipping any bills…..