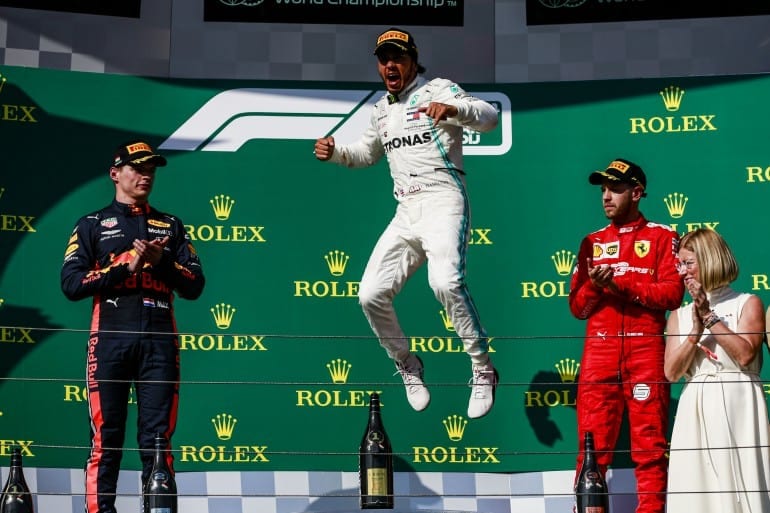 The 2019 Formula One Hungarian Grand Prix, the last race before the summer break, had a lot to live up to as compared to the crazy German Grand Prix. It wasn’t the same dramatics, but after an intriguing battle for the win, Lewis Hamilton secured his 81st career victory, relegating Max Verstappen to second.

“I feel really grateful for the day and for the team for continuing to believe in me and for continuing to push the limits and to take a risk, a chance on me,” Hamilton said. “We’ve been together seven years and it always feels like a new win.”

Verstappen got a good start this time after getting an awful start in Germany, yet the Mercedes caught up very quickly and the three cars went into turn one three-wide. Verstappen kept the lead and Hamilton got past Bottas on the outside. A few corners later, Leclerc got by and Vettel got past Bottas a lap later.

It appeared that the Finn had damage on his front wing after contact with the rear of Leclerc’s car into turn four. Bottas’ crew was ready to change his front wing on lap four, but Bottas did not come in until lap six and fell all the way to 20th and on the hard tire. Not a good way to start the race for Bottas, whose seat will be decided on by Mercedes during the summer break.

Gasly continued his tough run on the season as the Frenchman fell all the way from sixth to ninth in the first five laps and fell a few seconds back on the McLaren and Raikkonen in the Alfa. Throughout the first stint, Gasly was 35 seconds behind Verstappen.

Verstappen dominated the first stint as Hamilton tried to keep  life in his tires and keep the Red Bull within two seconds to try for the undercut on what looked to be, at the time, the only stop of the race.

While Hamilton kept Verstappen within striking distance, the Ferraris of Leclerc and Vettel held fourth and fifth, but they were 10 seconds off the pace of the top two. It was clear early on that it would be a Hamilton vs. Verstappen duel this afternoon. Hamilton had the pace as he held the fastest lap through the first 20 laps. It seemed as if Hamilton was biding his time before attacking the Red Bull for the lead.

Daniel Ricciardo was on a march through the field after starting last on the grid when the team changed his power unit after qualifying in 18th. He made a dazzling move around the outside of Lance Stroll for 16th on the 10th lap of the race. He then held Bottas behind him in 16th for many laps, thwarting the recovering Mercedes’ efforts as he lost two seconds a lap to his teammate.

Lap 24 is when Hamilton began picking up the pace as it was nearing the first pit stop. Verstappen pitted on lap 26 to try and avoid the undercut from Mercedes.

Hamilton then picked up the pace and pitted on lap 32 and came out five seconds behind the leader Verstappen, but had about six lap fresher tires and caught him within three laps. The battle was then on, bringing us to lap 39; Hamilton got side by side with Verstappen and ran wide through the narrow turn four. Verstappen was putting on a great fight from the Mercedes and kept the lead.

The gamesmanship then started after a few laps of Verstappen extending the gap to over two seconds. Bottas, who was a lapped car, stayed in front of Verstappen a little longer than usual, allowing Hamilton to pull within a second.

This turned into a flipped around battle of Monaco as Hamilton was able to stay with Verstappen but just could not get around him. However, Hamilton pitted on lap 49 for medium tires in an attempt to force Red Bull to stop and try an undercut.

It was a brilliant move as Hamilton started catching up to Verstappen. It became a strategy race as Verstappen couldn’t pit at this point or else he would lose the lead, and was forced to stay out there on much older tires and anticipate a battle for the win at the end of the race.

The first and only retirement came on lap 52 when Romain Grosjean parked his Haas. It had been a tough day for the Haas up to that point and things were not getting better for the cursed American squad as his teammate Kevin Magnussen was mired in 13th.

Hamilton was moving ever closer to Verstappen. With 12 to go, he was within 14 seconds, and with 10 laps to go he was just over 11 seconds. Hamilton also set fastest lap after fastest lap as Verstappen was running out of rubber on his tires. The Mercedes team told Hamilton that they predicted that Verstappen would be “down to zero rubber” on his tires on the last lap. Verstappen then came over the radio on lap 64 of 70 saying that the tires were dead, so it was only a matter of time that Hamilton would catch Verstappen.

The final battle was on, and Verstappen was given extra engine power modes to try and hold off Hamilton. Only a half a second separated Verstappen from Hamilton on lap 66, but down the front straight, Hamilton had DRS and was able to get past Verstappen easily around the outside before speeding off to victory.

Verstappen was a minute ahead of Leclerc in third, so a pit stop for soft tires was a good move for Red Bull so that Verstappen could protect second place.

“We were just not fast enough,” Verstappen said. “I tried the hardest I could on the hard tire, but it was just not enough. Today we didn’t win, but it was a good day and a good weekend for us. We were just lacking a bit of grip, I guess.”

The last battle of the race was between the two Ferraris for the final podium spot. Vettel stayed out much longer than Leclerc for the first stop, allowing Vettel to have much fresher tires by the time he did come in. On lap 68, Vettel finally caught to Leclerc and got past for third, thus completing his second straight podium.

“I had one opportunity, which I took — happy to get some champagne now and a cool down!” Vettel said. “I think it’s good for everyone to get a break, the guys have been working very hard. There will be tracks where we’ll be better, we need to get stronger.”

Formula One now goes on its summer break. F1 returns in September in Belgium.

Vettel’s third place looked so disappointing.
This race was worth watching, yet the same ending. It seems like the drivers never agree with whatever the engineer/strategists say on the radio. It always a negative reply from the drivers.