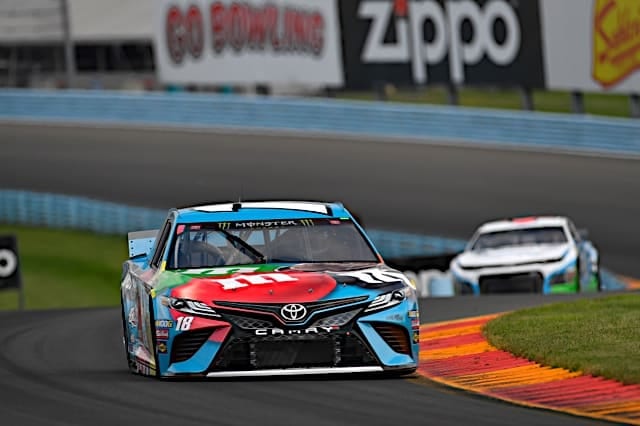 Heading into Sunday’s (August 4) Go Bowling at the Glen, Kyle Busch was one of the pre-race favorites. But from the get-go, the No. 18 had an eventful afternoon.

On lap 2, Busch dove underneath William Byron heading into turn 1 for the runner-up position. Busch wheel-hopped, spun out and dropped outside the top 10.

Throughout the rest of the opening stage, Busch charged through the field. It seemed like recovery was possible until he got to Byron for fourth position. When approaching the inner loop, Busch sent the No. 24 off into the grass. Over Byron’s radio, crew chief Chad Knaus wasn’t pleased, pleading to his driver to retaliate to get the grass off the grille or else he and his driver would have an issue.

"If I see the 18 come back here without you knocking the f**k out of him, we're going to have a problem" – Chad Knaus#NASCAR #GoBowlingAtTheGlen @WGI @WilliamByron radio saying front nose damage

But when Byron got up behind Busch, the No. 18 appeared to slam on its brakes, damaging the front end of the No. 24. Byron ended the day in 21st.

While his driver had no comment post-race, team owner Rick Hendrick expanded on the Byron-Busch incident.

“If you let guys push you around, you let them know that you’re not going to let that happen,” Hendrick said. “I think he got the worst end of the deal when Kyle brake-checked him and knocked the front end out of the car. Sometimes, in the heat of the battle you want to do things, and if you thought about it a little bit more you settle down and finish the race. In the heat of the battle, I didn’t know Chad (Knaus, crew chief) told him to [do that]. If I had a radio, I would have probably told him the same thing.”

Kyle Busch, meanwhile, didn’t add much. “You saw what happened,” Busch said curtly before walking away after the race.

But that was just the start of his problems. With just under 30 laps to go, Busch was again the center of attention, this time making contact with Bubba Wallace. The lap prior, Busch hit Wallace going through the carousel. So, when the two got out of turn 7, it was game on down the frontstretch for Wallace.

Ultimately, it ended with the driver of the No. 43 turning Busch going into turn 1, bringing out the caution. After the race, Wallace sounded off on the incident and was frustrated over Busch’s on-track aggression.

Beating and banging down the frontstretch with Bubba sending Kyle spinning. Watch on NBCSN or stream: https://t.co/UNrfpf97zY pic.twitter.com/3Jtgwt9kWP

“He just ran me the f*ck over, that’s exactly what happened,” Wallace said post-race. “I don’t care if I’m two years in, rookie stripes or what, but I’m going to get my respect on the track and I don’t care who it is. That’s what guys fail to think about the young guys or with me. I won’t put up with no sh*t, so I flat out wrecked his ass.

I had noted that Kyle was running behind Bubba just before I saw Bubba go spinning into the fence. I was not surprised when I saw Bubba go after Kyle and spin him out. I figured he had earned it, twice over. I just wish these youngsters would learn how to properly spin a car out, inflicting at least the same damage as they received. But, I guess when a certain driver feels that he’s more important and entitled, then he can wreck whomever he chooses? Cheap shots.

Would have been nice if they had showed more of the first incident, not sure if Bubba was referring to that or turn 7 when Kyle was trying to pass him. Good for Bubba for retaliating although if I were him I would of let him go by then drive him into turn 1 while he was trying to brake’ get those rear tires off the ground, rather than just blatently turning him but its the heat of the moment decision. Great race, lot of action outside the top 2. Enjoyed the aggressiveness, maybe these young guys are starting to bring some fire back to the sport! I sure hope so!

Kyle Busch is a terrific driver. I’ll give him that. But inside him lies a spoiled, arrogant, egotistical child.
So much for Samantha’s effort to make a changed man.
Perhaps she needs to pray a different prayer before he climbs into the car.l

Kyle must have quite a crib to sleep in. I wonder if Sam has to burp him after she feeds him?

Bill B
Reply to  Terry

“burp him”, is that what they call what she does to him?

Baby Busch has a bad case of affluenza and it’s getting worse. He also has a bad habit of wanting his car to do what it can’t. To paraphrase a great man, “A man’s got to know his car’s limitations.”

No no no you push that car beyond its limits you, run it as hard as it’ll go and then push it harder. Why would I want to watch a bunch of guys make left turns going only driving as hard as their car would allow it? That was an awesome road course race. Its hard to pass and guys were using the bumpers and tempers were flaring. Thats what NASCAR is all about right there.

I think this was one of the best races I’ve seen in a long time.

A car will only go as fast as it is capable of. That’s why Baby Busch spun at the beginning of Brian’s product. Go too fast and spin or hit the wall. Gilles Villeneuve used to spin in corners so he would know how far to push the car.

The car will only go as fast as the driver will push it, that is where the talent of a driver comes into play.

A good driver will push a car to its maximum and no further. Otherwise the car will spin or head toward the wall when exiting a turn (sound familiar?) and damage the car.

All this is so funny because Bubba will be back to running in the high 20 to low 30 positions next week at Michigan.

Not am not really sure what Busch’s issue was with the 24 car on that lap 2 incident. He went into the corner the 24 seemed to hold his line and was racing like he is supposed to do. His dumping of the 24 in the inner loop was not needed nor should it be considered retaliation for anything earlier. If that is what Busch believes then he is the “spoiled, arrogant, egotistical child.” Terry says of him.
Same holds true of some of the other incidents on track we did not get much follow up.
It would have been nice to know or found out more of the 18-43 issues. That was poor production from NBCSN not digging into that issue deeper while they continued to show replays of each lap of the 9 and 19 in 1st and 2nd. This situation got very boring after a while and imo should have been cut away from periodically to show other action on the track that ultimately may have been more interesting than the repetitive nature of the 9-19 “battle” for the lead. The 19 never truly got close enough to make anything happen.

Lets review KB 11th, Byron 24th, Wallace as usual way back. The last 2 or 3 seasons KB has more wins than the entire Hendricks fleet. But then, so does just about everyone except Rousch Fenway.

Childress doesn’t. How about those Dillon boys. Ty 30th dumb dumb 31st
Thank you for everything grandpa, we are doing the best we can. Sorry we let bubba beat us.

Expect Bubba to be piloting the “Official Crash Car of NASCAR” for the remainder of this season. I bet he has been told that the #43 team may either be sold off, or shut down prior to next season. Childress needs a charter to put Tyler Reddick in a RCR Cup car next season, or risk losing him and Murstein is probably tired of losing money trying to field a lightly-sponsored, mid-back pack Cup team.

It’s hilarious that Kyle Busch is feuding with the two drivers who he used to employ at KBM.