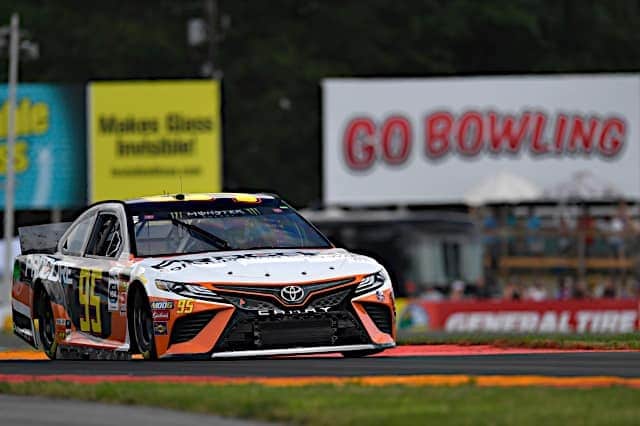 2019 has been a breakout season for Matt DiBenedetto. In Sunday’s (Aug. 4) Go Bowling at the Glen, the No. 95 team picked up their fourth top-10 finish of the season. The sixth-place run was also his second straight on a road course.

“I guess we’re road course aces here,” DiBenedetto said after the race. “It’s not my background but I love doing it.”

DiBenedetto began the race from 20th position because he caught traffic during his qualifying lap on Saturday. But once the green flag waved, the No. 95 charged through the field, finishing 12th in stage one.

During stage two, track position remained the same for most teams, including DiBenedetto, finishing 12th for the second consecutive stage. But the final stage is where he charged through the field.

During the final 10 laps of the event, DiBenedetto passed former Cup Series champions Kevin Harvick and Brad Keselowski to move up to sixth, his fourth top 10 in the past seven races.

However, the California native thought the team could have done better had it acquired track position.

“I hate to say it, and I don’t want to say I’m disappointed with sixth, but you always want more,” he explained. “Our cars have the speed at these types of places. It’s kind of in our wheelhouse. I always say the places we can let off the gas and use the brake pedal — drive with our feet –that’s where we can run better. I always want more. I want to take this team to the front.”

The opening 15 races of 2019 were rough for DiBenedetto. The No. 95 team had speed, but failed to put a full race together, often falling out because of a parts failure or having a miscue on pit road. But since Sonoma Raceway, the lone other road course that’s been run this season, Leavine Family Racing has turned the corner with an average finish of 11.9, which includes a 27th at Chicagoland Speedway.

Road courses have always suited DiBenedetto well, and he’s enjoying the capability of putting an entire race together.

“I love these places because our team — I’m nothing without my team and how good of a racecar I have,” he said. “They give me good racecars, and me as a driver, and us as a team can go back to using my feet to drive, which we don’t do at some of the big tracks this year. You’re using your feet to drive.

“It’s fun just wheeling the heck out of a stock car, old school, beating off curbs. It’s kind of my style. I grew up short track racing and that’s what I love doing, slip-sliding around in a stock car.”

Because of the recent hot streak, DiBenedetto adds its fun to be driving the No. 95.

“This is the most fun,” DiBenedetto said of having the most fun in his career. “You always want more, it’s just fun to have the privilege of working with such good people and such a good team. That’s what makes it really fun. I’ve been lucky every step of the way to have all the opportunities I’ve had.”

With his 2020 plans not solidified runs like these certainly serve as a solid audition for his future with Leavine Family Racing.

“I’m fighting for my life,” he said. “Everybody knows. They see the headlines and the mess in the media. I hope I can stay with this team. I hope it’s for a long time.”

The series heads to Michigan International Speedway next weekend, where DiBenedetto finished 21st in June.