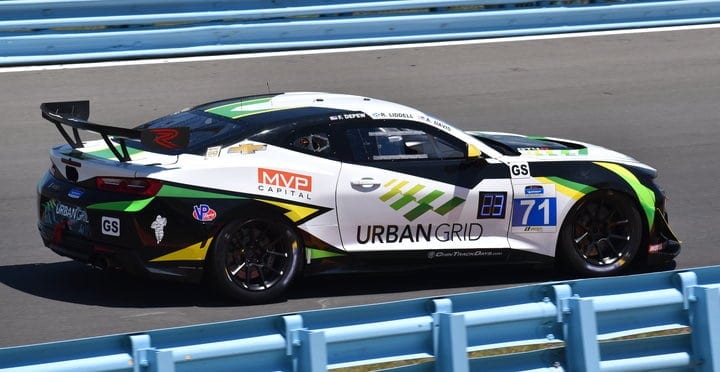 Rebel Rock Racing’s Frank DePew and Robin Liddell earned their second win of the season Saturday (Aug. 3) at Road America under relatively astonishing circumstances.  With four turns to go, Liddell was in fourth.  A daring outside move at Canada Corner moved the No. 71 Camaro past Eric Foss and Corey Fergus to get up to second.  Compass Racing’s Kuno Wittmer appeared to have the race won, but suddenly slowed a few hundred feet from the line.

Liddell was able to sweep past the stricken McLaren and beat Wittmer to the line by seven-hundredths of a second.  Wittmer apparently tried to activate the radio to congratulate the team, but pushed the pit road speed limiter button instead.

Weather was the primary issue Saturday at Road America.  A thunderstorm swept over the 4.048-mile road course, dropping heavy rain and hail on the facility.  As a result, the race was shortened from two hours to 75 minutes.

The race started in wet conditions before drying out.  CarBahn Motorsports’ Tyler McQuarrie started from pole, but dropped quickly down the order.  PF Racing’s Jade Buford took the lead on the first lap, but quickly lost that advantage to eEuroparts.com ROWE Racing’s Kenton Koch.  Debutant Akhil Rabindra gave chase in the Aston Martin.

The track conditions led to a variety of pit stop strategies.  The No. 2 Audi for Koch and Tyler Cooke and the Rabindra/Kris Wilson Aston Martin went with a one stop strategy.  That required those teams to run a significant amount of the race on wet tires on a very dry track.  Others went with a two-stop strategy to counter the rain returning to the premises later in the event.

After the stops, Motorsport In Action’s Fergus ended up in the overall lead in the No. 69 McLaren.  The stage was set for an interesting battle until Wilson crashed his Aston Martin out of third overall with 15 minutes remaining to bring out the caution.

The cleanup was completed with only enough time for a one-lap shootout.  Fergus led on the restart, but Wittmer was able to get past for the lead entering turn 3.  Once out front, Wittmer attempted to drive away, but a couple of mistakes brought Fergus back into the picture.  Murillo Racing’s Foss was right there as well.  Liddell was fourth, waiting to strike.  Strike, he did.

Wittmer and Paul Holton were second, followed by Foss and Jeff Mosing.  McQuarrie and Jeff Westphal came back to finish fourth, while Park Place Motorsports’ Alan Brynjolfsson and Trent Hindman were fifth.  As for Fergus and teammate Jesse Lazare?  Fergus made a driving error exiting the final turn, as shown in this fan video.

This was the race for third. pic.twitter.com/xyLkTGvvf1

The move dropped the No. 69 McLaren back to a seventh-place finish.

In TCR, LA Honda World Racing’s Shelby Blackstock had the pole, but Fast MD Racing’s Nick Galante was quickly able to get to the front.  Pit stops jumbled the field signficantly.  Ultimately, it was HART’s Ryan Eversley that came out of the pits with the lead.  He was able to hold on to take the checkered flag for what would have been HART’s first TCR victory.

Unfortunately, the rules came into play here.  Despite the shortened race length, minimum driving time was still out there.  In order to get points, each driver had to drive a minimum of 25 minutes.  Eversley’s drive time equated to 5.884 seconds below the 25-minute minimum.  As a result, the HART team was disqualified.

The HART disqualification resulted in Bryan Herta Autosport’s Mason Filippi and Harry Gottsacker inheriting the class victory in their Hyundai.  Blackstock and Tom O’Gorman were second, followed by Roadshagger Racing’s Gavin Ernstone and Jon Morley.  Michael Lewis and Mark Wilkins were fourth in the second Hyundai, while Atlanta Speedwerks’ Brian Henderson and Todd Lamb were fifth in their Honda.

Saturday’s race will premiere on Aug. 11 at 10:30 p.m. on NBCSN.  The Michelin Pilot Challenge teams will be back in action on Aug. 24 at VIRginia International Raceway.