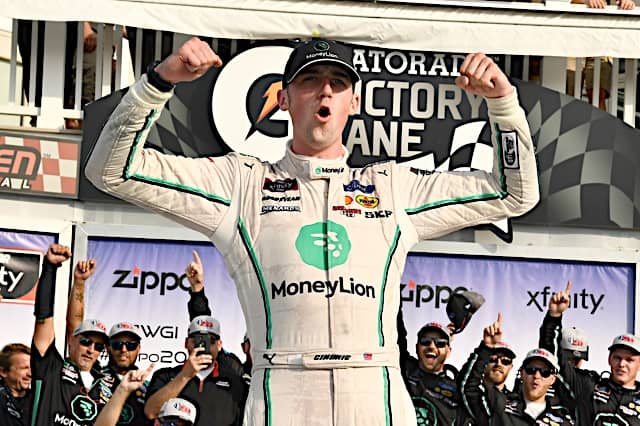 The 2019 NASCAR Xfinity Series season is starting to take on the feel of the 2018 Monster Energy NASCAR Cup Series campaign. It’s had a Big Three that dominated early, claiming an outsized share of the race wins. But as spring has turned to summer, other drivers have started loosening up their stranglehold, and Watkins Glen International has played the same role in both cases.

There was even a little bit of a parallel between Elliott running away from a more accomplished racer in Martin Truex Jr. while Cindric had to contend with 2014 Watkins Glen Cup Series winner AJ Allmendinger. The difference is that Cindric had a much, much tougher battle on his hands over the closing laps in one of the cases where a late-race shootout truly lived up to its name.

(And no, the fact that Cindric would have won the race anyway had Allmendinger triumphed in their back-and-forth battle doesn’t take anything away from it.)

Does Cindric’s win mean anything in the larger picture? It’s tough to say in the immediate aftermath. Like the previous week’s winner, Chase Briscoe, Cindric doesn’t have the resume of a championship contender, with just this one win and a single stage victory under his belt. Nor is locking himself into the playoffs that big a deal as he was going to get in on points anyway.

Still, if we learned anything from the 2018 Cup season, it’s that the fourth driver to make it to Homestead-Miami Speedway absolutely has a chance to win the whole thing. This year’s Xfinity field doesn’t have anyone in it yet who has the look of a Joey Logano — or even a Brad Keselowski, for that matter, who briefly spurred talk of a Big Four last year by getting hot right before the playoffs — but there’s still time for some additional intrigue over the final six regular season races.

And it’s absolutely worth keeping in mind that two of the next three events are also road course races, where Cindric could flex his muscle again or another first-time winner could emerge. Stay tuned.

The duel between Cindric and Allmendinger over the final two laps, in particular, was everything you could ask for in the final part of a race. Not only was it youth versus experience and fresher tires against what appeared to be an otherwise faster car, but it was contested in spirited fashion without one driver needing to wreck the other.

Cindric acknowledged it as well, giving props to the broadcaster/part-time racer he defeated after the race. As for ‘Dinger, he sounded like he wanted one more chance to try to bump the 20-year-old aside but had no designs on spinning him to win.

“If I could make a run down the back straightaway, I was going to, but I wasn’t going to go in there and send it,” Allmendinger said. “He didn’t deserve that. He raced me fairly clean, and I paid it one time. That’s how I looked at it: I had one chance to pay him back. I did, and he held onto it. He deserved the win.”

That’s a fairly stark contrast to …

The enmity between Justin Allgaier and Ross Chastain deserves to be listed here not because it’s inherently wrong, but more for the sake of its bad blood and resulting bad result for Chastain, as in a season-worst 33rd.

The first time the duo got together, it was Allgaier who ended up going for a spin.

CAUTION: @J_Allgaier gets spun in the bus stop and we go to yellow. pic.twitter.com/gt9Ughgx2n

Keeping in mind what they say about payback, it caught up with Chastain not too much later, except his meeting with the tire barrier was a lot rougher on his race car.

No letup from @J_Allgaier as he gets back at the No. 4 for an earlier incident. pic.twitter.com/pOq6ITIuGw

Though Chastain has amassed quite the following this season with his combination of wins, aggressive driving and undeniably-catchy watermelon gimmick, it’s not hard to find fans who point out that he tends to race a little rough at times. If you’re in that camp, you obviously feel that he got what he deserved.

On the other hand, if you’re pro-Chastain all the way, Allgaier just became your new Public Enemy No. 1. Considering that Chastain made comments about handling things himself, it’s safe to say this feud probably isn’t over.

As a colleague pointed out on the Frontstretch Slack on Sunday morning (Aug. 4), Allmendinger is now officially the worst driver in the Xfinity Series this season, with two last-place finishes in two starts and an average finish of 37.5. Why keep giving this guy opportunities?

We kid, of course. Allmendinger actually has had nothing but success in his two starts for Kaulig Racing, coming home third at Daytona International Speedway and just losing out on a win at The Glen. The problem is that his No. 10 Chevrolet once again failed post-race inspection, meaning he’s batting 1.000 for the year in a category you definitely don’t want to lead.

Could the car’s rear-height violation have been caused by damage incurred during the race? The driver certainly thinks so.

I can go into a full description of why it was low from contact early in the race on a restart. The issues we struggled with after cause track bar mount was bent and oil tank getting hung on the coil of the spring the rest of the race. But just doesnt f***ing matter. ???? https://t.co/pUx2OI6yJM

Yet Kaulig Racing is choosing not to appeal (again), and there really is no point anyway since Allmendinger isn’t running for series points. The guess here is that the team would have appealed had he won the race, but since that likely would have been futile, perhaps it’s for the best that the finishing order worked out the way it did.

In any case, the team’s issues in keeping the No. 10 car legal are ruining what should be a great story in ‘Dinger’s partial season, and that’s a shame.

Even with Allmendinger getting booted all the way down to last place, no underdogs managed to crack the top 10 at Watkins Glen. However, Jeremy Clements did come close, ending up in 11th. It was his second-best result of 2019 to date, trailing only a ninth-place run at Daytona a few weeks prior.

An “attaboy” also goes out to Scott Heckert, who drove the No. 5 BJ McLeod Motorsports Chevrolet to a career-best 13th place in his first start of the season.

For the first time in quite a while, Saturday’s race featured more than one Cup Series driver, though none ended up factoring in the final dash to the checkered flag. Kyle Busch, who qualified on the pole and won the first stage, probably would have had the best chance to alter the outcome, but his Supra suffered a mechanical failure and he had to settle for 31st place.

Ryan Blaney led 13 laps, tied for second-most behind Busch, but didn’t have the speed or track position he needed at the end of the race and wound up fourth. Ryan Preece finished 10th.

“We talked before the weekend and we knew something had to go wrong with the [No.] 18, but this MoneyLion Mustang, everybody that puts this program together, I am just so blessed to be here.” – Austin Cindric

“We both tried to be really clean with each other, and I think that is what racing is all about. Congrats to him, he was on it the whole race and he drove the wheels off to get past me.” – AJ Allmendinger

“He knew what he was doing when he got into the bus stop and wrecked me on purpose. … You can’t race like that and not have something come of it.” – Justin Allgaier

“You don’t expect to get wrecked like that in a NASCAR national series event.” – Ross Chastain

There are always a few weekends every season when the Xfinity Series race leaves fans saying, “I hope the Cup race lives up to that,” and the Zippo 200 at The Glen probably belongs in that category. The mechanical gremlin gods intervened to ensure Rowdy didn’t stink up the show, the battle for the checkered flag was a thriller and we got a first-time winner out of the deal. Not too shabby at all.

One good road course outing deserves another, right? The series heads next to Mid-Ohio Sports Car Course, where the Xfinity regulars will have the two-plus-mile layout all to themselves. Allgaier won the event in 2018 and would undoubtedly love to repeat so he can get the winless monkey off his back, but it’s worth noting that Allmendinger will be entered as well, and he’s also a past winner.