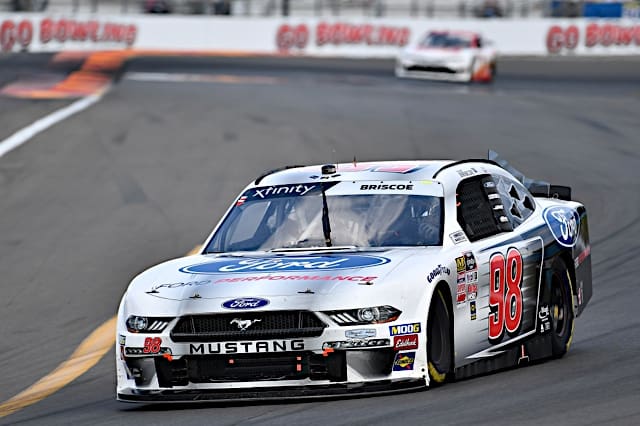 Chase Briscoe is one of the rising stars of the NASCAR Xfinity Series and Ford’s only developmental driver. The Indiana native with a dirt-racing background appeared on everyone’s radar when he seemingly came out of nowhere to win the ARCA Menards Series championship in 2016. He had a successful Gander Outdoors Truck Series rookie campaign with Brad Keselowski Racing in 2017, but his career his a roadblock when the team closed down after the season.

Last year, Briscoe ran a partial Xfinity season split between the No. 60 for Roush Fenway Racing and the No. 98 for Stewart-Haas Racing with Biagi-DenBeste. He won the Charlotte Motor Speedway ROVAL but only had four top 10s in 17 starts. Briscoe also made a one-off start in the No. 27 in the Eldora Speedway Truck race last season where he won. He returned to defend his Dirt Derby trophy this year but was unsuccessful after getting wrecked late. In Xfinity this season, Briscoe is sixth in points and won at Iowa Speedway.

Frontstretch caught up with Briscoe prior to the Xfinity race at Watkins Glen International this past weekend and talked about dirt racing in NASCAR, how last year’s Eldora and ROVAL races saved his career, his relationships with Tony Stewart, Brad Keselowski and Ford and what his path to the Monster Energy NASCAR Cup Series looks like.

Chase Briscoe: I mean I don’t know if it guarantees you anything, that’s for sure. I feel like it for sure gives us a little extra confidence. Even the win last weekend [at Iowa Speedway] — we’re the most recent road course winner and the most recent winner. So I think that’s good confidence-wise, but these races are hard to win no matter what. Hopefully now that we have that win last weekend, we can use that to our advantage and maybe do some different strategies.

Massie: You ran Eldora a few nights ago. How did you think that one compared to the last two?

Briscoe: The track was definitely a lot different. The past two years, before this year, the track was not as much top-dominant. I felt like it was more middle to bottom, where this year, the cushion was just really good and it was more like the second, third and fourth year that they went. I feel like this past year played way more into a dirt guy’s hand than the past two years because it takes a little bit of a dirt background to know how to run the cushion. But at the same time, it was definitely a lot harder to pass. I still think it was a good race, I just wish it had a little bit different outcome for us.

Massie: Do you think that Xfinity or Monster Energy NASCAR Cup series cars should race there?

Briscoe: Yeah, absolutely. I think Xfinity cars should and especially Cup cars. Cup guys are considered the best in the business, and you get to see them get challenged at a short track, a road course, intermediate, superspeedway, so I think we for sure need to go to a dirt track, as well as in the Xfinity Series. I think the fans obviously support the events — they love it. TV ratings are good, so I would be on board for sure.

Massie: But do you think it would hurt the Truck race?

Briscoe: I don’t think so. You know, a lot of people say that. There’s still 90-something races among all three series, and if we had three or four dirt races, to me, it’s no different than when we go road course racing three or four races a year. They’re still important, fans still support them because they don’t get to see them every weekend. And I think it would be good for the entire sport.

Massie: Are there other dirt tracks besides Eldora that you think could handle a NASCAR race?

Briscoe: The toughest thing is just facility-wise. I think that that makes it hard. There’s not very many dirt tracks where you pit in the infield as it is and especially have pit road capabilities. Knoxville, from a facility standpoint would be good. Racetrack-wise, it would be good. I don’t think personally Knoxville would race as well as Eldora just because of the banking and whatnot. But I do think that would be a potential place to do it. You’d have to do some renovations, but even at a place like Charlotte, I think you could do it, as well as Lawrenceburg in Indiana I think would be another place where track-wise. I feel like Lawrenceburg’s racetrack would put on the best race for the Truck Series. But they would have to do some stuff to the infield obviously to make it happen.

Massie: Now, is that going to get you in trouble with your boss Tony Stewart suggesting other dirt tracks?

Briscoe: No, I don’t think so. I think Tony is comfortable where he’s at. He’s safe with Eldora, and I think NASCAR, if they are gonna go dirt racing, it’s gonna be at Eldora. That’s kind of a given. It’s been proven it works. The fans support it. Facility-wise, they can do it. I don’t think he has to worry. I think Tony even, for the love of dirt racing, would love to see more dirt races.

Massie: How weird is it to race at a track that your boss owns? I know you weren’t driving for him in that event, but still.

Briscoe: Yeah, I mean it’s business as usual. I mean there’s a little bit of added pressure just because he’s there watching. I feel like that adds a little bit to it, but it’s not too weird. I’ve grown up going to Eldora my whole life, so it’s nothing out of the ordinary.

Massie: It seemed like that win last year at Eldora did a lot for you — like maybe you were starting to lose relevance a little bit and it kind of put you back on the map. Do you think that was the case?

Briscoe: Yeah, absolutely. Last year, especially at that point, had been a terrible season and even after that on the Xfinity side was still not very good. I was starting to second guess myself, and a lot of people were kind of starting to second guess me. And I was able to kind of show I could still win races in the right opportunity. And then obviously being able to win the ROVAL that year, too, that helped a lot. But yeah, Eldora last year was kind of the one I felt like kept my name in the mix. And obviously now it’s worked out to where, this year especially, I felt like it helped me stay relevant.

Massie: How much of a setback was Brad Keselowski Racing closing?

Briscoe: It was certainly a setback, but at the same time, without that, I definitely don’t go run the ROVAL last year and get to drive for Stewart-Haas in general. The plan from day one was to drive for Brad for two years and then go and run two years of Xfinity. So it kind of just jump-started everything. I think the biggest thing that was a setback about it was it just came so late in the year. It didn’t give Ford really any time to get anything lined up for me. So I felt like if we had known about it in May or whatever, then we could have planned accordingly, but it just happened so late in the year for everybody, not only myself. It just put everybody in a little bit of a bind.

Massie: What’s the relationship now with you and Brad?

Briscoe: Personally, I think I need another year. I’m still learning a ton on the Xfinity side. You know, I’ve ran up front, but I haven’t ran up front every single weekend. We’re kind of hit or miss on it. There’s still some tracks on the Xfinity schedule this year that I’ve never been to in my life, and going there in a Cup car wouldn’t be an ideal scenario. So I want to do it in the right situation when I feel like I’m ready, and, personally, I feel like I have a lot to do to get better before I’m ready for that. But hopefully, I can come back here next year and win a lot more races and hopefully show we’re ready for some Sunday racing.

Massie: Is Stewart-Haas Racing your ticket to Cup? They’ve got a full house.

Briscoe: They’re certainly full right now. That’s where I would love to be, growing up being a Tony fan — he was my hero growing up. So if I had to choose anywhere to drive, that would certainly be the place I’d love to do it. But I just want to do it in a competitive race car, whether that’s [Team] Penske or even Roush or wherever. Obviously, it’s probably going to be in a Ford, so somewhere that’s competitive. I don’t want to go do it and run 15th to 20th every week. I want to do it in a winning race car, and obviously, Stewart-Haas is a really good place for that right now.

Massie: What’s it meant to you to have Ford just come in and back you like this and have your back all the way?

Briscoe: It’s been huge. I don’t come from family money. I don’t have a big sponsor following me. So really the only way I was ever going to get to drive anything was having a manufacturer behind me. And to be the only driver for Ford is humbling, for sure, and it’s a blessing — a company like that to only have one guy and me to be able to be that guy and kind of carry the driver development side is pretty important, and it’s a big deal. It’s pretty unbelievable that they picked me, and I don’t know why they picked me, but obviously, we’ve been able to win some races and compete for championships.

Massie: A more fun question: your SHR teammate Cole Custer has the Stone Cold beer-bashing celebration now. Are you a little envious of that? Are you coming up with your own elaborate celebration?

Briscoe: Yeah, I’m not too jealous. I’ve never had a sip of alcohol in my life, so that’s definitely not my thing. But yeah, I just want to win races and I don’t really care what celebration there is. I just like getting the trophy, and that’s all that really matters.