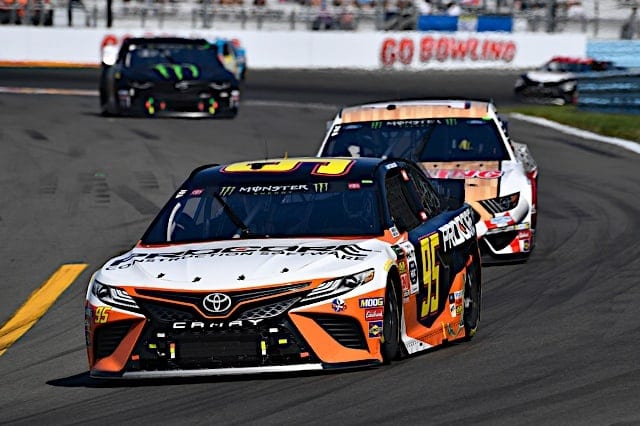 Matt DiBenedetto might need a new nickname soon. “Guido” is fun and everyone loves “DiBurrito,” but “King of the Road” might be just as fitting. The 27-year-old from Grass Valley, CA landed sixth in the final rundown at Watkins Glen International on Sunday (August 4). This coming after he raced to a fourth-place finish at Sonoma Raceway on June 23.

It wasn’t just that DiBenedetto finished sixth but how strong his car was during the 90-lap GoBowling at the Glen. The No. 95 Leavine Family Racing driver wheeled his Toyota through the field, running strong throughout the entirety of the race. Just as he did at Sonoma, he ran down and passed Kevin Harvick and a few others, for position in the final laps.

After the race, DiBenedetto expressed his gratitude for all of the people who helped him reach a point in his career where he could have an opportunity to be that competitive.

“It was cool and it’s always so satisfying on these road courses for us to inch our way forward and pass some guys,” DiBenedetto said. “I wish we could have started a little further forward. I know we could have run a little bit better, but that’s fine. It’s fun to get so much support from all our team, Toyota, JGR and Procore. I just hope I can be a part of this for a long time to come”

DiBenedetto faces an uncertain future now that LFR has a technical alliance with Joe Gibbs Racing. JGR has to figure out where to put Erik Jones next year while making a Cup spot for Christopher Bell.

“I’m just fighting for my life, my career,” DiBenedetto added. “I want to be the one who get Leavine Family Racing their first win and many wins to come and be with this organization and Toyota for a long time to come. That’s my goal, I’m just lucky to be doing it.”

Behind DiBenedetto, Chris Buescher was in 13th position. Buescher continues his streak of top-20 finishes which now stands at an impressive 11 straight. Michael McDowell also landed a top 20 with his 16th-place finish on Sunday.

The Xfinity Series also made a few right handers at the Glen this weekend. There wasn’t a significant underdog presence in Saturday’s race, though. Jeremy Clements landed the top spot among the underfunded with his 11th-place result. Scott Heckert (13th) and Gray Gaulding (15th) also highlighted the small teams, but overall, there wasn’t much to write home about this week.

As for the NASCAR Gander Outdoors Truck Series, it was time for the annual mud fest at Eldora Speedway. Mike Marlar had the best run ever for the Josh Reaume-owned No. 33. While it may have been the first start for Marlar in a truck, the 41-year-old is no stranger to dirt ovals. Until Thursday night’s (August 1) race, the Reaume truck had been a stranger to the top five. Marlar ended that as well with a fourth-place finish.

Other notable names in the top half of the field at Eldora were Tyler Dippel in ninth, Justin Shipley in 11th, Ross Chastain 12th, Austin Wayne Self finishing 13th and Mark Smith 15th.

Felix Sabates team was never really underfunded. The Cuban businessman owned a retail distribution company as well as yacht and car dealerships. In the early years after forming his race team in 1989, the organization was ultra competitive and won several times with Kyle Petty behind the wheel.

However, after Petty left in 1996, the team didn’t appear to be on the same level. New driver Joe Nemechek was often fast in qualifying but the success didn’t seem to transfer on race day. A fourth-place run at Texas in 1998 was the only top-five finish Nemechek had managed in two-and-a-half years with the No. 42 Chevrolet. The organization wasn’t really seen as a winning outfit anymore.

Then the Cup Series rolled into New Hampshire Motor Speedway in September of 1999. Nemechek qualified 11th — solid, but not spectacular. The early stages were dominated by pole winner Rusty Wallace and the previous week’s first time winner Tony Stewart.

With 71 laps remaining, Nemechek took the lead shortly after a restart. Two more restarts took place in the final 20 laps, and it seemed that Stewart would certainly pounce at some point and steal the victory away. But each time Nemechek held on, and then with two laps remaining, Terry Labonte and Ricky Craven crashed to bring out the yellow once again. With no green-white-checkered rule, this sealed the most improbable win of the year. It gave Nemechek his first career win and Sabates his first victory in over four years.

Nemechek would score three more wins in his career, though all for different team owners. He made his final Cup start in 2015, but he still races in occasional Xfinity or truck events. Sabates would partner with Chip Ganassi in 2001 with the return of Dodge to the Cup Series. That pairing would net five more wins in two years courtesy of Sterling Marlin and Jamie McMurray. To this day, Sabates still owns a stake in Ganassi Racing with drivers Kyle Larson and Kurt Busch.

"Deep down everyone wants to race NASCAR."

Mike Marlar was able to make a dream come true at @EldoraSpeedway while picking up a top-five finish. pic.twitter.com/WpJoGBkrje

Nobody has done more to earn a top ride than you @mattdracing Keep up the good work. https://t.co/BOJnEWcbkk

If they pull out Matty D out of the 95 for Bell, I’m going to be pissed. Gibbs did the same thing to him and Drew Herring when Logano was coming up and they had nowhere to go.