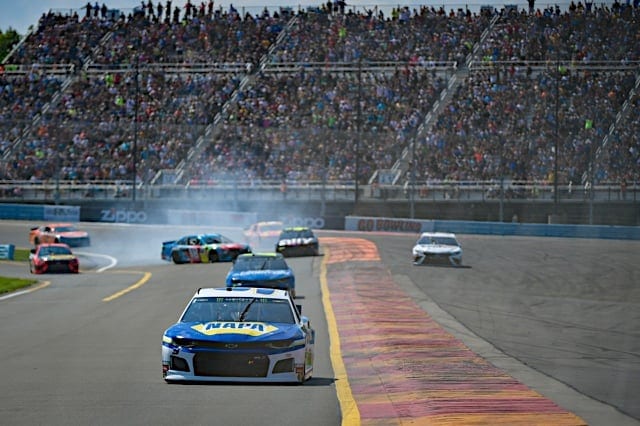 The theme of this weekend’s NASCAR action was “payback.”

It started with the Gander Outdoors Truck Series on Thursday night (August 1) in the Eldora Dirt Derby, as Tyler Dippel got into Ben Rhodes after the checkered flag in return for being shoved into the wall in the final laps.

Then in the Xfinity Series Zippo 200 on Saturday (August 3) at Watkins Glen International, Ross Chastain got loose and spun Justin Allgaier lightly into the fence. Later in the event, in retaliation, Allgaier shoved Chastain full-force into the wall, ending Chastain’s day.

On Sunday (August 4), Kyle Busch had trouble with a pair of former KBM drivers. Under caution with crew chief Chad Knaus’ urging, William Byron plowed into the No. 18 as payback for earlier contact, mashing his own front end in the process. Then late, Bubba Wallace spun Busch for what seemed like no reason, though the two had been banging doors shortly beforehand (in all reality, television missed the initial contact Wallace claimed happened in the carousel).

Matt DiBenedetto‘s sixth-place run was his fourth top 10 of the season, all of which have come since Sonoma (seven races ago). While his season finish is a ho-hum 21st, since Sonoma he’s averaging a 12th-place run in his No. 95 Leavine Family Racing Toyota Camry. If he’s able to stay with the team next year, he could surprise a lot of people.

Richard Childress Racing and its satellites. Bubba Wallace was the highest driver of this subgroup, with heavy rear end damage in 28th (out of 37 cars). Austin Dillon finished 31st after spinning, while Ty Dillon and Daniel Hemric collided early, slotting them with results of 30th and 35th, respectively.

Joe Gibbs Racing’s Erik Jones continued to stay on fire, running fourth. It was his eighth top five and 12th top 10 of the 2019 season, his fourth straight top five, and his ninth top 10 in the past 12 races.

Roush Fenway Racing’s Ryan Newman battled a loose wheel, then got busted for a penalty on pit road while correcting it. It added up to a 25th-place day at a track where he only has three top 10s in 18 starts.

Team Penske’s Ryan Blaney is a pretty good road course racer. He picked up his second Watkins Glen top 10 in four Cup starts with Sunday’s fifth. He has two Sonoma top 10s in four starts, and he’s the only driver so far to win at the Charlotte ROVAL.

In his NGOTS and NXS starts on road courses, he’s only finished outside the top five once.

Jimmie Johnson‘s first race with new crew chief Cliff Daniels didn’t turn out as well as was probably hoped. He finished in 19th, but was running up near the front before an incident with Blaney. He then went on a bit of a tirade afterward, which isn’t a good look for anyone, even if you are a seven-time champion.

Johnson has finished outside the top 15 in nine of the 22 races this season, including the past four in a row.

Kyle Busch wins Paint Scheme of the Week due to being in a Hazelnut M&M’s wrap this week. First of all, (most varieties of) M&M’s are delicious, secondly, hazelnut is amazing and should be available in more candy, and finally, sky blue just looks solid as a base color.

Not sure how much bad luck one can take ??‍♂️… best run in quite a while running p15 & broke the locker. Not an axel, not a motor, not a transmission. A locker. ??‍♂️??‍♂️??‍♂️??‍♂️but on the bright side, 2 weeks of steady progression pic.twitter.com/9gyM9g5aMz

Ryan Preece had another solid day fall apart because of a random mechanical failure. While we aren’t entirely sure where this part goes or what it is, the results listed his day as ending due to a “rear gear” problem. It was the JTG Daugherty Racing rookie’s second mechanical failure DNF of the season and his sixth overall.

I asked @RyanJNewman yesterday about the lack of road course “ringers” in the Cup Series now pic.twitter.com/5YNF7bsJUh

In response to a question by Fronstretch’s Michael Massie, Newman provided some insight as the weekend began on why there aren’t really many road course ringers in the Cup Series any longer.

Last night stings so bad! Shoulda got the win and didn’t get it done. Hopefully we at least put on a show for all you awesome fans! Thanks @MMUSCuttingTool for being a part of it! pic.twitter.com/xRSqGfbTan

Part of the fun of the Dirt Derby is how beat up the trucks get during the course of the event, demonstrated here by Chase Briscoe‘s very battered seventh-place F-150. That’s also an amazing paint scheme in the part-time ThorSport Racing No. 27.

The Trucks get going with the Corrigan Oil 200 on Saturday (August 10), August 10 around 1 p.m. ET, with TV coverage on Fox Sports 1. This is the final regular season race, with Matt Crafton holding onto the final playoff position. He’ll get into the playoff field as Ross Chastain wins the race.

The Xfinity Series continues road course racing at Mid-Ohio on Saturday around 3 p.m. ET on the NBC Sports Network in the B&L Transport 170 at Mid-Ohio. Austin Cindric should repeat, but Briscoe will be in the mix as well.

On Sunday (August 11), the Consumers Energy 400 will go green around 3 p.m. ET, with TV coverage on the NBC Sports Network. Chase Elliott should make it two in a row, as Michigan is one of his better tracks.

Could someone please go review footage of all the races in which Johnson or Busch or both or anyone, “moved, knocked, shoved, tapped, hit, booted, etc. and see how many times over the course of their careers they have done the exact, if not worse, behavior they themselves are “bitc..ing” about after/during the race. Busch’s reaction toward the 24 car during the race should have been called into the NASCAR hauler and been scolded for being a “petulant, self absorbed, ass” or something close one person posted before.
Getting tired of drivers behaving the same way they complain about when done to them.