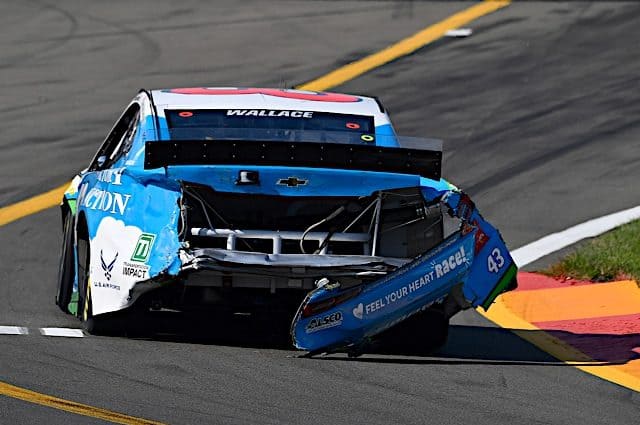 This past weekend’s road course events at Watkins Glen International had pretty much everything – turning both right and left, drivers spinning and sliding, tempers flaring and fantastic races to the finish on both days. Saturday’s NASCAR Xfinity Series race featured a battle between Austin Cindric and AJ Allmendinger, while Sunday’s Monster Energy NASCAR Cup Series event showcased a rematch between Chase Elliott and Martin Truex Jr., with Cindric and Elliott emerging as the winners in New York.

However, the tempers were probably the biggest storyline heading into the week, though, with three different incidents resulting in retaliation – one during Saturday’s Xfinity Series event and two on Sunday for the Cup Series.

This begs the question of if these retaliatory moves should be punished or not. Is it better to let “boys have at it” or to crack down when necessary? Vito Pugliese and Adam Cheek debate.

Kyle Busch had himself quite a weekend at Watkins Glen. Not only did he manage to invoke the ire of Chad Knaus, he managed to get himself hooked and spun by Bubba Wallace coming down the frontstretch.

While Knaus did not take kindly to the Toyota driver having his way with the Chevrolet of William Byron, there was a sense of a lack of respect by the No. 18 to the No. 24. That led to Knaus issuing a none-too-veiled instruction to his driver: “If I see the 18 come back around here without you knocking the f–k out of him, we’re going to have a problem.”

The bigger problem ended up being the nose of Byron’s Camaro stuffed in and requiring additional work to repair after Busch brake-checked him going uphill through the esses under caution.

So for those demanding punitive action here – why? Against whom? This seems like a self-policing incident between two drivers racing for position. Oh, and by the way, Bristol Motor Speedway is in two weeks — that was always the weekend of retribution for recent grievances.

The incident that garnered more attention was Wallace versus Busch. Coming out of turn 7, Busch and Wallace were beating door to door following an earlier incident that sent Wallace spinning into the wall. Busch got one last forceful slam right by the flag stand. Wallace, taking offense, had his, “I’m as mad as hell, and I’m not gonna take it anymore,” moment and hooked Busch, sending him spinning — much to the delight of any fans not wearing No. 18 gear. While it was certainly aggressive — if not warranted — it was largely ineffective as Busch never actually stopped rolling, let alone make contact with anything.

If a tree falls in the woods and a caution comes out, does anyone care?

The incident on Saturday with Justin Allgaier — well, that was a bit different and more egregious. Ross Chastain bounced off the curbing going through the bus stop and washed up into Allgaier, sending him spinning. Allgaier lost positions and a bunch of time on track, but the car was largely unaffected after stopping gently against the tire barrier. Allgaier, soon after, was behind Chastain through the bus stop, but didn’t repay the favor there. Through the inner loop, he continued to push and bump him, sending Chastain off line and harder into the tire barrier, causing significant damage.

That was a bit uncalled for, but he felt wronged and it’s his prerogative how big a deal he makes out of it. As a championship contender, he may not want to start a back-and-forth and arouse the wrath of the Melon Man later this fall.  It was a bit uncalled for after what appeared to be a legitimate racing incident bouncing off the curbs, but that’s kind of what makes stock-car racing fun to watch, right?

It’s the old argument of “boys, have at it.” Everyone bemoans NASCAR rules and interfering with action. Well, here’s some action and NASCAR letting the drivers handle business. Interfering with this would fly in the face of what makes racing fun: rivalries, contact and the soap opera that results.

Oh, and by the way, did I mention Bristol is in two weeks? -Vito Pugliese

If retaliation goes unpunished, does anyone learn anything?

On Saturday, we saw Chastain and Allgaier tangle twice, with the inciting incident being Chastain getting into Allgaier’s No. 7 car, sending him spinning but with minimal damage. A little while later, Allgaier retaliated in the carousel by punting the No. 4 car pretty heavily into the barriers outside the carousel. Chastain’s car was destroyed by Allgaier’s revenge, lighting up Twitter and sparking debates on just how much retaliation is necessary or acceptable.

Sunday’s event saw two different incidents, both involving the No. 18 of Busch. The first was instigated by Busch and Byron making contact in the first turn on the second lap, which spun out Busch’s Toyota. Later in the first stage, Busch nudged Byron as they raced into the bus stop, sending Byron’s No. 24 through the grass as the No. 18 sailed by. This led to Byron’s crew chief Knaus telling his driver, “If I see that 18 come back around here without you knocking the f—k out of him, we’re gonna have a problem.”

Byron tried — and failed — to do so, attempting to avenge himself in the esses. Busch knew what was coming and brake-checked the No. 24, damaging Byron’s front end and Busch suffering minimal damage himself in the process.

The second incident on Sunday also involved the No. 18, with Busch attempting to race his way back through the field after a penalty. As he neared the top 20, he and Wallace, who had gone for a spin while racing Busch earlier, battled it out down the frontstretch, beating and banging off each other and about knocking the doors off their cars. Wallace finally had enough and turned Busch going into turn 1, sending Busch off track. The Joe Gibbs Racing driver didn’t suffer damage but lost a number of spots and was understandably upset afterwards.

So, after the weekend’s chaos, should something be done about retaliation? Should we let it go? I don’t think so. I’m a complete supporter of minimal intervention and the “boys have at it” mentality, but sometimes it gets a bit out of hand, especially on Sunday.

Now, Busch has had his share of inexcusable moments, chief among them of course being his 2011 destruction of Ron Hornaday Jr.’s truck at Texas Motor Speedway. The two had been racing hard and had both their trucks damaged trying to avoid a lapped vehicle, sending both into the wall. Busch took it a bit too far, however, hounding Hornaday down the backstretch under caution and then sending them both into the wall at a not-so-slow speed. Busch was parked for the rest of the weekend.

That and moments similar to it certainly warrant penalties, but Sunday’s retaliation seemed to go a bit too far. Let’s start with Allgaier. Sure, Chastain got into him, but it appeared accidental — Chastain was under Allgaier and the two made contact. However, Allgaier completely destroying Chastain’s No. 4 car was entirely excessive and unnecessary. It’s a little bit similar to the Busch/Hornaday incident — an accidental move that led to over-the-top payback.

On to the Busch incidents, it’s my belief that Knaus should have been penalized for egging his driver on if the incident had been more catastrophic. I guess, in a sense, Byron’s smashed-up front end and a ruined race is punishment enough. That initial lap-2 incident seemed harmless enough, both drivers in the wrong place at the wrong time. Given Busch’s past temperament and the fact that blame could be given either way, it’s not a surprise that he sent Byron through the grass (with no damage to speak of either), but Knaus then encouraged Byron to go and wreck the No. 18 car — not just that, but to, again, “knock the f–k” of out him.

I’m all for drivers standing up for themselves, and young drivers like Byron and Wallace should certainly establish themselves in this regard early in their careers. But Byron went after Busch in the esses, where guardrails and barriers loom on either side, and it very well could’ve destroyed one or both cars if Busch hadn’t brake-checked him.

Wallace’s incident seemed just as unnecessary, maybe even more so. Yes, the two drivers doored each other down the frontstretch and both probably battled a little too hard for where they were, but I don’t think it warranted Wallace outright spinning the No. 18. I wouldn’t have penalized Wallace just for that, but imagine if, say, the brakes in Busch’s car had malfunctioned; he would’ve flown – possibly literally, with the lip that turn 1 has – into the barriers.

This is somewhat similar to the several incidents we’ve had in Major League Baseball this year — warnings should be NASCAR’s first, automatic step. The MLB has been very good about issuing warnings — you don’t want to allow teams to throw 95 mph fastballs at opponents’ heads or shoulders. That sets a dangerous precedent, and this analogy applies to NASCAR as well. You don’t want blatant revenge to be a commonplace thing in racing.

Excessive retaliation certainly warrants some sort of action, and not penalizing drivers during this somewhat sets a precedent for future incidents. A fine is a relatively reasonable response to these situations — especially Allgaier’s. I’d feel the same way about the two Busch incidents, but neither resulted in excessive damage — although it’s important to establish the precedent of warnings and further action. -Adam Cheek

Vito is one of the longest-tenured writers at Frontstretch, joining the staff in 2007. With his column Voice of Vito (monthly, Fridays) he’s a contributor to several other outlets, including Athlon Sports and Popular Speed in addition to making radio appearances. He forever has a soft-spot in his heart for old Mopars and presumably oil-soaked cardboard in his garage.
Previous Truckin’ Thursdays: Too Many Laps Run Under Caution at Eldora
Next Frontstretch Podcast: Ryan Blaney’s Playoff Outlook, Beer-Drinking in Ireland