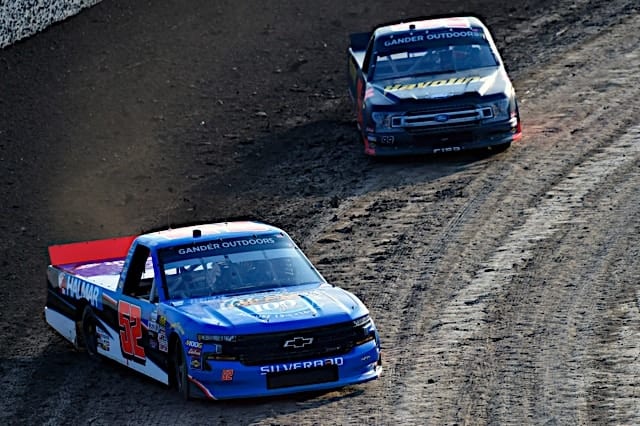 However, the main storyline from the 2019 edition was not solely about Friesen. Instead, the focus after the race was turned toward the number of caution laps in the race. Sixty-eight of the 150 laps (45.33%) were run under the yellow flag. There was obvious frustration by all at the many caution flag laps in the race.

What can be done to solve the issues that plagued NASCAR and forced so many laps to be run under the caution flag at Eldora?

First, NASCAR could extend the race length. The 2019 race lasted 1 hour and 49 minutes. Because of its popularity, the sanctioning body could get away with extending the length and fans probably would still attend. Yes, NASCAR would need to alter the start time for the race. Because it eliminated single-truck qualifying on race day though, it could start the qualifying and last chance races earlier, thereby allowing the feature to also begin earlier. NASCAR could extend the Eldora Dirt Derby to 200 laps to hopefully create more circuits run under the green flag.

If NASCAR opts not to extend the length of the Eldora Dirt Derby, then what can be done? NASCAR could red flag the field after pit stops under the yellow flag to set the lineup. Despite the oddity of this idea, the format for the sport’s lone national series dirt race is unique. Adding another unique feature to the race is nothing new.

In the 2016 Goody’s Fast Relief 500 at Martinsville Speedway, NASCAR ran a caution-flag period for 30 laps. Scoring issues and other circumstances forced the Monster Energy NASCAR Cup Series drivers to drive around the 0.5-mile track at an aesthetically glacial pace.

The incident in 2016 evoked necessary criticisms from fans and drivers alike. Jeff Gordon was outspoken about the issue then, and it remained a problem NASCAR did not correct.

The problem resurfaced in Rossburg, Ohio, and NASCAR failed to produce a satisfying answer.

In the Eldora Dirt Derby, Chase Briscoe vented his frustrations about the lack of green flag laps, and many fans agreed.

I imagine many will agree with Chase Briscoe on thoughts of increasing green-flag laps at Eldora after a frustrating night where 82 of the 150 laps were run under green. #nascar @nascaronfox https://t.co/PQ1BXQLCCv

Another suggestion would be for only green-flag laps to count in the feature race. But that might make the time of the race too long, so here is another outside the box idea: NASCAR could make the laps in the third and final stage of the Eldora Dirt Derby only count as green. The second stage of the race ended at lap 90. So, NASCAR conceivably could declare the final 60 laps of the race are only counted as green flag laps.

Consider this: five of the 12 caution flags flew in the final stage. Those five caution flag periods accounted for 34 of the 60 laps in the final stage. More than half of the third stage was run under the yellow flag. As a result, Briscoe could not regain his track position to battle Friesen for the win. The high amount of caution-flag laps arguably robbed the fans of a photo finish or at least a spirited battle between the two best drivers in the field.

Finally, NASCAR did not utilize an already established rule in the Eldora Dirt Derby. NASCAR only displayed the black flag once, and then it rescinded the penalty on Ben Rhodes. If NASCAR black-flagged drivers for failure to follow instructions on where to line up for restarts, they likely would spend less time arguing and more time racing. NASCAR is the boss; the sanctioning body failed to assert its authority in the race.

The Eldora Dirt Derby will always be a unique race for the Truck Series. Its uniqueness can cause rare problems, but NASCAR needs to prepare for known situations for the 2020 race. Who knows? If NASCAR makes a rule change to solve this problem, it may solve problems at other tracks as well.

First off change the percent of caution laps in the article as 4th grade math students know 68 out of 150 cannot be 27.X%.
Second why can’t NASCAR get something as simple as the line up process correct. little dirt tracks and even local paved tracks have no issue with stopping the field to line up properly and then getting to green in one or two laps. This is not a rocket science fix for NSACAR/ I was sitting watching the race and was like what the hell is taking so long. NASCAR really screwed the fans for this race. Plus if they are already treating the evening more like a local dirt track with heats and a LC qualifier why not do this as well.
Another idea would be to slow the pace laps after pit stops to whatever minimum speed is needed for the trucks to stay running and get the field set.
or as posed in the article, even under caution, post the offending drivers, and if they choose to not comply go green and quit scoring them. Likely would have fewer issues as which is worse be score one or two spots to low or finishing 29th because you did not get scored for 5 laps or the rest of the race. Again, stopped coddling and be firm.

Well said. Eldora is the only “big time” NASCAR event I care about at all and the scoring fiasco really ruined the enjoyment. With that to look forward to next year it might be zero.

Brian, thanks for noting the arithmetic error. Not sure how I ended up with 27.2% instead of the correct amount. Correct percentage changed!

This is my number one complaint about racing. And the stage racing builds MORE caution laps in each race. I think at a minimum the last 20 laps, don’t count caution laps as Laps Run. That would be a good start.

Why even bother to have the LCQ if no one is being eliminated? No one is going to gain or lose many positions anyway.

Why there were a lot of caution laps it was by far the best race of the year. Not another cookie cutter track with aero dependent IROC cars running single file. It was nice to see a race where everyone was running flat out leaning on each other. Pretty much the short track racing most of us grew up on. Reminded me of the old Bristol. Be nice if NASCAR had more racing like this but that will never happen as they own all these 1.5 mile tracks. Too bad that NASCAR’s own self-interests are slowly bringing this sport down.

Hey you got it right!! More GREEN FLAG laps on the DIRT!! Thanks for airing your thoughts on how to run the DIRT DERBY. I was extremely disappointed about half the final stage run under yellow! That’s no way to finish a race.