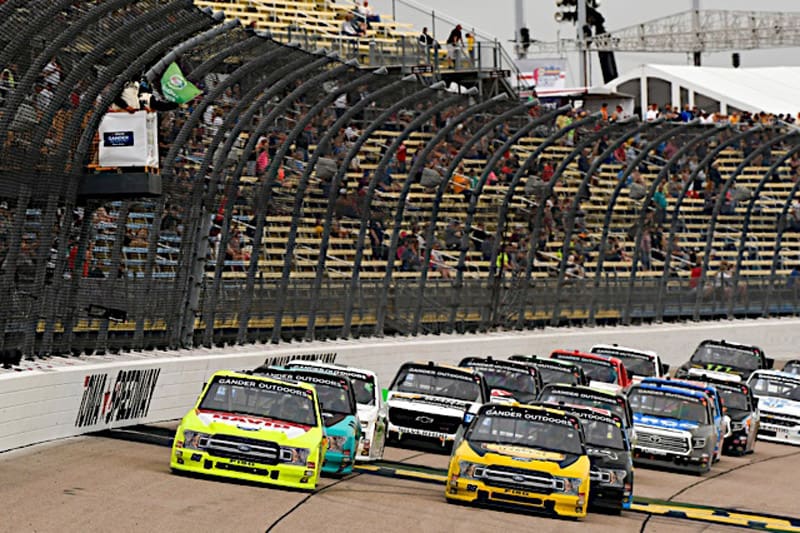 Who will make it into the 2019 Truck series playoffs?

This week’s NASCAR Gander Outdoors Truck Series race at Michigan International Speedway will be the final race of the regular season.

Seven drivers have either clinched positions in the eight-driver field or will clinch by starting the race. Ross Chastain, Brett Moffitt, Johnny Sauter, Stewart Friesen, Austin Hill, and Tyler Ankrum have all clinched by winning a race. Grant Enfinger, the points leader, will clinch once he begins the race.

Enfinger needs to gain just nine points Michigan to secure the regular season championship. This could very easily be decided in the first stage; Matt Crafton finishing worse than eighth or Enfinger finishing first or second would decide the outcome, giving Enfinger a spot on points no matter who wins the race or where he finishes. If Enfinger gets no stage points, a mere 28th-place finish would suffice. Friesen would have had a very slim chance if just one more truck had shown up this week, but with just 31 in the field, the best-case scenario for Friesen (winning all three stages and Enfinger finishing last with no stage points) would leave Enfinger just a point ahead of Friesen.

Crafton is in the catbird seat. He has a slim chance of getting by Enfinger, but it isn’t too likely that scenario plays out unless Enfinger has very early trouble. No, Crafton needs to be more worried about any of the other playoff-eligible drivers besides the seven already in winning, as that would automatically eliminate Crafton no matter what else happens.

Of those six, only three seem like legitimate threats. Creed is without three crucial team members this week following a penalty, Dippel’s only two top 10 finishes this year have been an eighth in a wreck-filled race at Texas Motor Speedway and an eighth at the wildcard Eldora Speedway, and Gus Dean is Gus Dean.

Ben Rhodes has a solid chance of winning on Saturday. Rhodes has finished second three times this season, one of those being at Kansas Speedway. Rhodes also finished fifth at Atlanta Motor Speedway and fourth at Charlotte Motor Speedway, bringing some solid speedway results to the table this season. But Rhodes has had a down summer, with just one top ten finish in the past four races.

And then, there are the two Kyle Busch Motorsports drivers. Burton has had a great summer, with five top five finishes in the last seven races. And all but one came at tracks that were a mile and a half or longer. Burton probably has the best chance of any of these sixth at winning and getting in. Meanwhile, Gilliland hasn’t led a lap in his last six starts and looks like he’s going to need to put everything on the table if he wants to win and get off the hot seat at KBM.

Who will win in the Cup race?

Kevin Harvick utterly dominated in his conquest at Michigan in this Monster Energy NASCAR Cup Series race last year, winning all three stages and leading 108 of 200 laps on the day.

One thing that Michigan has always been known for has been long green flag runs. Last year’s race ended with a 57 lap run, and the June race there this year had a 46 lap run and a 55 lap run. And with how much the No. 4 team and crew chief Rodney Childers has emphasized long runs this season in their setups, Harvick should have a major leg up on the rest of his competition this week.

That is, except for Joey Logano. Logano was arguably even more dominant in June than Harvick was last year; while the 2018 Cup champion didn’t win stage 2, there were just 50 laps in the entire race that Logano didn’t lead en route to victory.

One driver fixing for a Michigan win is Kurt Busch. Busch finished third last June, sixth in this race last year, and second to Logano in June this year.

Who will conquer Mid-Ohio?

One of the most unique races on the NASCAR XFINITY Series calendar has to be the annual adventure at Mid-Ohio Sports Car Course. Not only just one of two standalone NXS road course races, Mid-Ohio has been home to strange races (2016’s ridiculous half-rain race) and stranger winners (Justin Marks).

Among the NXS regulars, only one driver has won at Mid-Ohio, that being Justin Allgaier. Allgaier stole the win last year after Austin Cindric dominated for much of the day. Cindric, now with nothing to lose courtesy of his playoff clinching win last week, is expected to be a major player once again in the buckeye state.

Unlike in Cup, where road course ringers are a thing of the past, there are plenty entered for this week’s race. A.J. Allmendinger enters this race as one of the favorites to win, in spite of the 2013 race winner’s disqualification after finishing second at Watkins Glen International last week.

IMSA driver Lawson Aschenbach will be making his third career NXS start for JD Motorsports, and his first at Mid-Ohio. Alex Labbe will be returning once again to Mario Gosselin’s team after finishing a solid 16th last week, while Scott Heckert will try to back up his 13th last week for B.J. McLeod.

A late change to the entry list, however, led to a new ringer in the field and a few mid-week headlines…

What’s next for Jeffrey Earnhardt?

Jeffrey Earnhardt announced on Twitter this week that he had parted ways with sponsor iK9 and Joe Gibbs Racing, just a couple of days before being scheduled to get behind the wheel of the No. 18 Toyota at Mid-Ohio.

Earnhardt, the son of Kerry Earnhardt, has made 159 starts across NASCAR’s three national touring series. Earnhardt had raced part-time in Cup last season before being hired to be iK9’s driver for select NXS races for JGR and a few races in Cup and NXS for Xtreme Concepts’ (The parent company of iK9) brand new team, XCI Racing.

iK9, for its part, tweeted out that it was a decision that Earnhardt had made.

You would need to ask Jeffrey. His lawyer requested his contract to be canceled. We accepted and moved to do the best for our organization. We wish Jeffrey the best of luck, he hopefully will have big news in the future to tell us all.

The new driver of the No. 18 Toyota this week will be IMSA driver Jack Hawksworth. Hawksworth, a former IndyCar driver, has won twice this season in IMSA GT class competition, including at Mid-Ohio earlier this season. If they had to pick somebody short term from IMSA whose name isn’t Andy Lally, it’s hard to make a better choice than Hawksworth.

It’s unclear what exactly Earnhardt’s future is. As the “last of the Earnhardts”, he’s always seemed to shy away from using his name to get a leg up and has never raced for any of the teams his family has owned over the years. Many believed that this would be his big break, finally getting into equipment that can and has won races. And now, it’s all over.

If Earnhardt really did decide out of the blue that he was done with iK9/XCR, he’s dumb. Getting a chance in JGR equipment and, down the road, potentially being on the ground floor of a new TRD supported Cup team is just plain idiotic. There has to be more to this story, because I just don’t buy Earnhardt being dumb enough to just leave that behind.