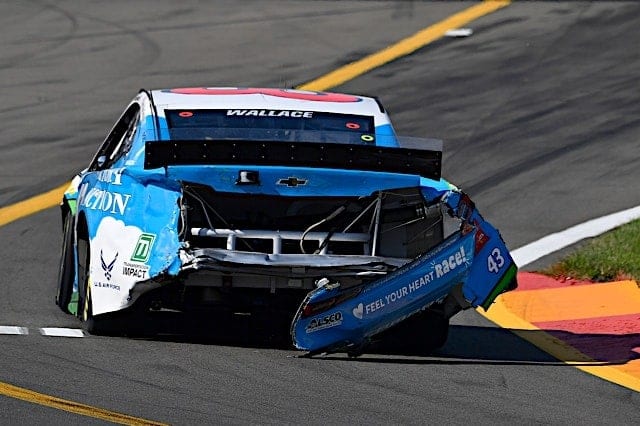 Last week, there were several incidents of retribution among NASCAR’s top series, including Kyle Busch/Bubba Wallace, Jimmie Johnson/Ryan Blaney and Justin Allgaier/Ross Chastain. Is there a point where NASCAR should step in?

Wesley Coburn: Kyle Busch and Bubba Wallace, probably not; Wallace was stupid, and he’ll be paid back sometime later in the season. Jimmie Johnson is having trouble coping with his new status as a field-filler, so that’s why he flew off the handle. It’s a part of sports, so no reason for NASCAR to get involved there. I do feel like it ought to have punished Justin Allgaier for flat-out dumping Ross Chastain, though. Chastain isn’t running for Xfinity Series points, and the first contact looked like a true accident. Allgaier’s action was deliberate and intended to harm, so going by Johnny Sauter’s suspension earlier this season, Allgaier should have been parked this weekend.

Mark Kristl: NASCAR should step in only when a driver uses their vehicle as a weapon to intentionally cause damage. In a 2015 Monster Energy NASCAR Cup Series at Martinsville Speedway, Matt Kenseth used his No. 20 Toyota as a weapon against Joey Logano. This season in the NASCAR Gander Outdoors Truck Series race at Iowa Speedway, Sauter intentionally wrecked Austin Hill. Both Kenseth and Sauter were appropriately suspended. Based on social media comments, there are two sides to all those stories. Because there are two valid arguments, let the drivers police themselves.

Zach Gillispie: Despite the negative connotation, conflict might just be the thing NASCAR needs. While that might sound pessimistic, people like consuming conflict because it is appealing and marketable. If you look at all of NASCAR’s marketing promos, there is always some sort of famous fight that gets thrown into them. NASCAR needed all these tiffs this past weekend because they provide storylines that fans want to follow. However, I agree that using your vehicle as a weapon is objectionable, but NASCAR must walk a fine line when intervening because these quarrels are what the NASCAR fan wants to see. Before you intervene, NASCAR, just let the drivers take care of it first, even if it comes to fisticuffs.

Amy Henderson: If the incident in question is under caution, or on pit road after the race, then yes, absolutely (and they have). During a race? That’s a tougher call. Bubba’s payback on Busch was the kind that’s relatively benign: he turned Busch at a time and place where he wasn’t likely to hit anyone else or anything that would hurt him, and it can certainly be argued that Busch had it coming. But then, where’s the line?  It’s ok as long as nobody gets hurt?  And if that’s the case, what happens when someone does? Really, as base as it may be, I’d still rather see them confront each other out if the cars after the race, where they aren’t destroying cars that they didn’t build or risking someone else getting hurt in the process. But I’m not sure NASCAR should step in unless someone is put in danger.

The Xfinity Series runs three road course events in a matter of four weeks. Is it good to have them bunched together, or would they be better to spread them out a bit?

Gillispie: This is tough. I love August because there seems to be so much hype surrounding the road course races as well as Bristol Motor Speedway. The road courses have arguably produced the most excitement in the series in the last several years. I honestly don’t think it matters when they are held, but they are in a quality spot on the schedule where they are. However, I have a not-so-practical but super-duper-cool idea. Why doesn’t NASCAR create a road-course-only series in the US (similar to the Whelen Euro Series in Europe)?

Kristl: Each of the three major NASCAR series needs its own identity. Xfinity has August as its road course month. For branding purposes, it works. When the 2021 schedules are released, NASCAR can further that model by adding another road course to the schedule.

Henderson: To me, this is a question NASCAR should be asking the teams, and listening to what they have to say.  It’s fun to have a month of unique races, but if it would be easier for the crewmen and people working at the shop to spread them out, that’s what should be done.  Their season is difficult enough as it is; they should be the ones answering this one.

Coburn: It’s probably a pain for all the drivers, crew members and people back at the shop, but the cluster of road courses all at once adds a unique element to the Xfinity schedule, and those are rare. It should be kept the way it is for now as an opportunity to spotlight the up-and-coming drivers and give the underdogs a chance to shine.

During practice at Eldora Speedway in the Gander Outdoors Truck Series, Sheldon Creed’s truck dropped added ballast. NASCAR deemed this a safety violation and suspended Creed’s crew chief, truck chief and engineer for three races. Was the penalty for Creed and GMS appropriate or too harsh considering the infraction?

Coburn: Since NASCAR views safety violations as some of the harshest penalties, it seems appropriate. Also, losing ballast would be a way of making the truck lighter, which could be a competitive advantage, so it also feels appropriate there. This is a violation that has been looked down on for generations.

Henderson: This is a safety issue first and foremost, and it’s known to teams that ballast issues like this one will bring heavy penalties, so it’s a matter of NASCAR being consistent with what they have said they will do. Better that than a “well, we know we said we’d do this, but…” and reversing course. That said, three crewmen is a bit much.  Suspend the crew chief or truck chief and drop a hefty fine and point penalty and be done with it.

Gillispie: No, not at all. I remember several years ago when a lead ballast went through a windshield and struck Jamie Dick’s helmet. Those things are extremely dangerous, and it’s the crew’s responsibility to make sure this type of incident doesn’t happen again. This is a fair punishment for such a dangerous violation, even if it was a mechanical failure.

Kristl: NASCAR misappropriated the penalty. Yes, suspending those crew members hurts the No. 2 GMS Racing team, but NASCAR should have instead penalized them where it hurts — with a fine and points penalty. Suspend the crew chief, but then fine GMS Racing and deduct points. This is a safety issue! Also, why did NASCAR deem this a safety issue and suspend crew members yet only confiscate Stewart Friesen’s No. 52 Chevrolet before opening practice at Kentucky Speedway? Let’s establish some consistency here.

Harrison Burton and Todd Gilliland both need a win this weekend to make the Truck Series playoffs. Who is more likely to get one, if any?

Coburn: Given that Harrison Burton has never raced at Michigan and Todd Gilliland has a fifth in his only start there, it seems like Gilliland has the edge, but Burton has a slightly better average finish (10.8 to 10.9). At the end of the day, though? Neither will win this weekend, or likely this season.

Kristl: Statistically Gilliland has the advantage, but neither driver will win at Michigan.

Henderson: Given their recent performance, Burton maybe has a slight edge, but neither driver has shown winning form much this year. They’ve had some bad luck but they’ve also made their own beds at times.

Neither win and their careers may be over, unfortunate reality. At the same time, what is the rush? There aren’t enough seats to keep pushing guys through KBM to the Xfinity and Cup anyways..
The reason everyone cares is they drive for top notch equipment at KBM so they should be able to get the job done. Imagine Chastain racing in their equipment.