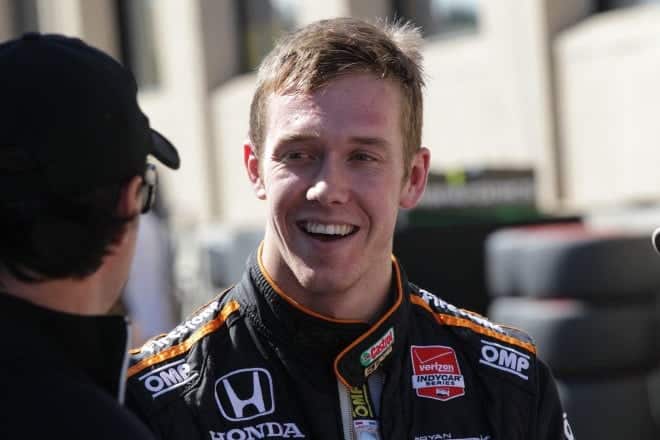 The standalone road course races in the NASCAR Xfinity Series tend to bring out intriguing one-offs, and this weekend at Mid-Ohio Sports Car Course is no different.

The 38-car field for Saturday’s (Aug. 10) B&L Transport 170 includes numerous drivers hired for the race for their road course racing prowess. Some, like JD Motorsports with Gary Keller’s Lawson Aschenbach, have previous Xfinity experience, while others, like Will Rodgers (Brandonbilt Motorsports) are making their road course debut in a NASCAR national series have but have plenty of experience elsewhere.

Then there are these four.

Of the 38 entries, four drivers, barring any further entry list changes, will be making their Xfinity Series debuts at Mid-Ohio this weekend. Each of them is notable for having extensive experience turning right as well as left, and some may even be familiar to the more casual racing fan, either because of the NTT IndyCar Series or from sports car racing.

This week, we’ll run down the Xfinity newcomers entered this weekend and discuss their resume up to now.

Probably the driver most likely to be familiar to American racing fans of the bunch, the England-born Jack Hawksworth has to his credit multiple seasons in the IndyCar Series, driving for Bryan Herta Autosport in 2014 followed by AJ Foyt Enterprises in 2015 and 2016. That stretched included a trio of Indianapolis 500s, with a top finish of 16th in 2016.

Hawksworth also has three Indy Lights wins, all in 2013, and has had a formidable 2019 in both the Complete WeatherTech SportsCar Championship and Complete Blancpain GT World Challenge Europe series, earning multiple victories on both circuits.

He’s got the best equipment of the four debuting drivers this weekend, piloting Joe Gibbs Racing’s No. 18 in place of the newly departed Jeffrey Earnhardt.

One of two Ohio natives making their Xfinity debut at Mid-Ohio is Aaron Quine from Akron. The 47-year-old has previous experience at Mid-Ohio in the Trans-Am Series and teaches teens in the Ford Driving Skills for Life campaign.

He’ll be piloting the No. 74 for Mike Harmon Racing.

DGM Racing often finds road course specialists for its cars at the Xfinity standalone road courses, this time tapping Chris Dyson for its No. 90.

The 41-year-old Dyson, from Poughkeepsie, N.Y., has multiple 24 Hours of Le-Mans starts and has raced in both the American Le Mans Series and the NASCAR Rolex Grand-Am Sports Car Series, among others, winning a championship in the former series in 2011.

His father, Rob Dyson, was also a sports car driver.

Patrick Gallagher is the other Ohio-born driver to make their Xfinity debut at their somewhat home track. A graduate of the Ohio State University in Columbus, Gallagher is a sports car racer with multiple wins and championships under his belt, plus many Mid-Ohio starts in the past.

Gallagher is driving the No. 99 for BJ McLeod Motorsports in his debut.