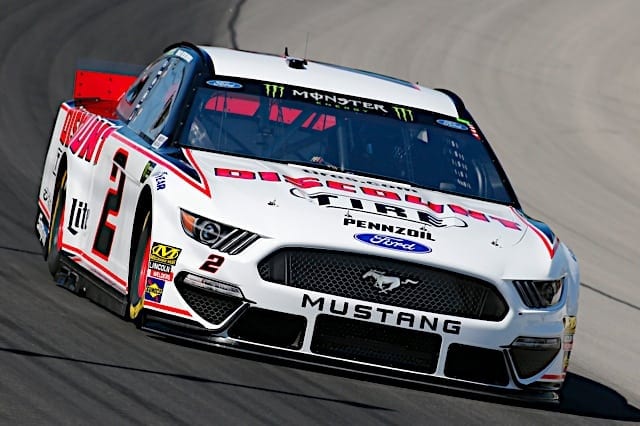 Brad Keselowski was the last driver to qualify for the 2019 Consumers Energy 400. He proved last is certainly not least as he won the pole at Michigan International Speedway. He will lead the Monster Energy NASCAR Cup Series field to the green flag on Sunday (August 11).

This is the 16th pole of Keselowski’s Cup Series career and his second of this season (both coming in the past four races). He bested the field with the fastest time of 190.471 mph.

Starting second will be Kevin Harvick. He completes a full Ford starting front row. On his qualifying lap, he drove his No. 4 Stewart-Haas Racing Ford at a speed of 190.089 mph.

William Byron and Alex Bowman gave Hendrick Motorsports the whole starting second row, with Clint Bowyer rounding out the top five at a speed of 189.439 mph.

Austin Dillon qualified seventh and his Richard Childress Racing teammate Daniel Hemric qualified 11th, but those efforts were short-lived. NASCAR disallowed both drivers’ times after both vehicles were found with unapproved alternators in post-qualifying inspection.

The L1-level penalty results in a $25,000 fine and a loss of 10 points from the driver and owner standings from each race team. After Dillon and Hemric were first and fifth in opening practice respectively, the pair will start from the rear on Sunday.

Not a single Toyota driver qualified inside the top 10. Actually, the highest Toyota driver in qualifying was Denny Hamlin at 14th.

Thirty-eight drivers are entered in the Consumers Energy 400, so nobody failed to qualify.

The second Cup Series race at Michigan International Speedway is not an impound race. The drivers will have two more practice sessions on Saturday (August 10).

The Consumers Energy 400 is scheduled to begin at 3 p.m. ET on Sunday, Aug. 11. NBC Sports Network will provide TV coverage of the race.

He really thought he’d be on the pole, silly boy. Finishing in the top twenty will be a big improvement for mr dillon. Wonder if his sponsors are thinking they spent their money wisely. I suppose it beats tossing it out the window, barely. Thank you grandpa.

Just goes to show how delusional some people are in NA$CAR these days, even with the Emperor gone.

29 year old Dillon got a new haircut for his birthday in the spring. I’m waiting for the facial tattoos, they should be hilarious. Oops, grandpa says no for now, now put your cowboy hat back on.