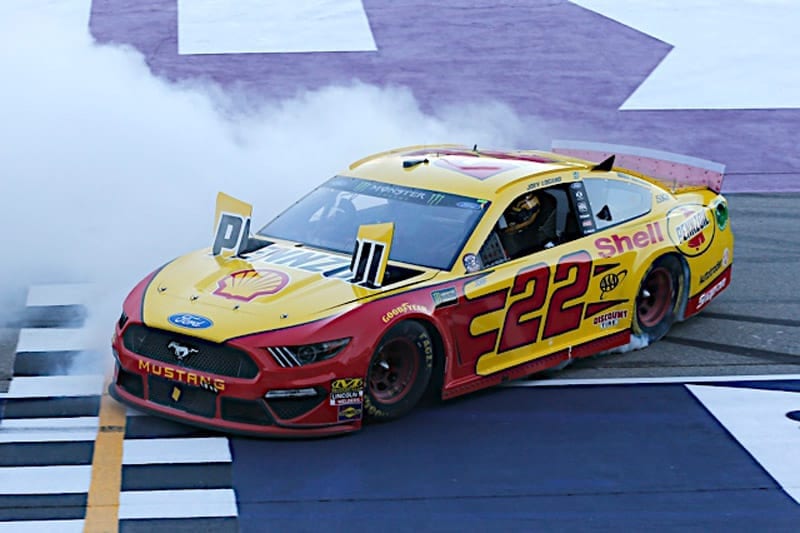 The Monster Energy NASCAR Cup Series makes its second stop of this season at Michigan International Speedway this weekend, which makes filling out your daily fantasy NASCAR roster just a little bit easier — but it’s still not easy. The Consumers Energy 400 is Sunday, Aug. 11, and TV coverage is provided by NBCSN.

In the first Michigan race this season, we saw racing like we hadn’t seen before at the two-mile oval. With the reduction of horsepower on ovals larger than a mile this season, drafting and closer racing have become more prominent. Additionally, passing has gotten harder than in recent years, so pay attention to the starting lineup when filling out your roster.

Defending Cup champion Joey Logano dominated the first 2019 race in the Irish Hills to win from the pole position, and Ford has won the past three races there. So expect more big things from the Blue Oval brigade this Sunday.

Also, with only 0.1 points awarded for each lap led by a driver, the need for a dominator is less important when building a winning lineup. The 200-lap race will only have a total of 20 points up for grabs in this category. Take note when building your roster and focus on mid-pack competitors who can climb up toward the front on race day.

Here are a few drivers to keep an eye on for Sunday afternoon’s race:

Did I mention Logano won this race from the pole position just two months ago? He led 163 of the 200 laps in that race — the most laps led by a winner in Michigan’s entire 50-year history. Now, just because a driver dominated one race at a track, doesn’t mean said driver will do the same at the next visit. But given how recent that performance was, Logano has to be in your lineup.

Logano is one of the best at Michigan. His three wins are tied with Kurt Busch and Kyle Larson for the most among active drivers. He’s only trails Jimmie Johnson in laps led at the track and has the fourth-best average finish among active drivers. He’s only finished outside the top 10 once in the past 13 Michigan races. Don’t get fancy with your lineup — pick a proven driver like Logano.

Coming off a win at Watkins Glen International, Elliott has a ton of momentum entering one of his best tracks. He has the best average finish among active drivers at Michigan and the best all-time among drivers with three or more starts there.

The June race was the first time Elliott had ever finished outside the top 10 at Michigan, and it came during perhaps the worst stretch of his young career — when he finished outside the top 10 in seven straight races including three DNFs. The Watkins Glen win appeared to snap Elliott out of that dry spell, and he could bump up his average finish even higher with his first Michigan win.

Michigan is Larson’s best track on the Cup schedule — three of his five career wins occurred there. Those three wins happened consecutively from 2016-17. Since then, Larson hasn’t even scored a top 10 at the track, but he’s had good runs the past few weeks and could go back to his old ways in the Irish Hills. He will start the race 17th, so the potential is there for positions-gained points.

Larson has scored three top fives in the last six races — his best stretch of the season. More importantly, all three of those top fives came in races where the Cup Series ran the low horsepower, tapered spacer package. With this package being used again on Sunday, look for Larson to be a serious contender.

Newman continues to be the best bang for your buck in fantasy. He had a bad day at Watkins Glen, but prior to that, Newman had finished 17th or higher in nine straight races, including one top five and five top 10s. That stretch mostly consisted of the low horsepower, tapered spacer package being used this weekend.

He is also pretty consistent at Michigan. He has finished on the lead lap in 14 straight Michigan races and has only failed to finish two his entire career. He finished eighth at Michigan in June, improving from an 18th-place starting position. Newman qualified 20th this weekend, so the potential is there to earn even more positions-gained points.

Over the past two months, DiBenedetto has transformed from an underdog into a consistent top-10 driver, nabbing two top fives and four top 10s in the past seven races. Unfortunately, his price on FanDuel has risen with him, but he’s still fairly affordable.

He finished 21st in June Michigan race, but that was before his current string of good finishes. DiBenedetto’s best runs have been on tracks less aero-dependent, so don’t expect him to be in the top 10 this week. But he finished in the top 20 at the last two aero-dependent tracks, Kentucky Speedway and Pocono Raceway, so he could finish somewhere in that range again.

DiBenedetto will start the race in 27th, so if he backs up his runs of late and gains a bunch of spots, then he will gain quite a bit of points.