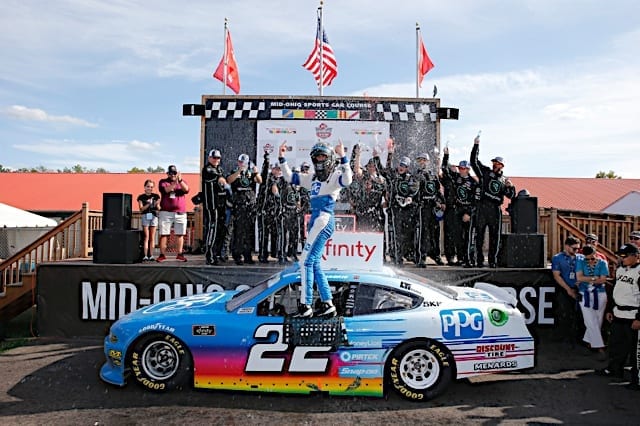 The month of August has been quite favorable to Austin Cindric.

A week after scoring his first career NASCAR Xfinity Series victory, Cindric once again was found celebrating in victory lane after claiming the checkered flag of the B&L Transport 170 at the 2.258-mile Mid-Ohio Sports Car Course.

Leading a combined 47 laps, the 20-year-old put on a compelling duel with Christopher Bell throughout the event. Despite stalling his No. 22 Team Penske Ford on a lap 18 green-flag pit stop, Cindric executed a near-perfect race, ultimately passing Chase Briscoe with 13 laps to go and cruising to victory in his home state.

Polesitter Cindric dominated stage one despite a lap 4 caution for Ray Black Jr.’s stalled Chevrolet. However, Briscoe won the stage when Cindric completed a scheduled pit stop with two laps to go in the stage.

A chaotic and wild stage two greeted competitors as Brandon Brown spun into a gravel trap on lap 28. On the ensuing restart, Chris Dyson plowed into the back of Cole Custer on the frontstretch, forcing the early retirement of Dyson’s No. 90 Chevrolet.

Here's what has us under the latest yellow flag at @Mid_Ohio.@J_Allgaier, @NoahGragson and others involved. pic.twitter.com/Kb5lRCul2V

In his first career start, Jack Hawksworth ultimately rebounded from an early tangle with Cole Custer to claim the stage two crown amidst the havoc. The full-time IMSA competitor showed promise in the No. 18 Toyota for Joe Gibbs Racing but eventually finished 15th after going off course late in the event on lap 66.

With the carnage behind them for the time being, Bell and Cindric battled back to the lead early in stage three. Pit strategy came into play after a late caution for Heckert’s crash with 19 laps to go. Briscoe, along with Regan Smith and Will Rodgers, gambled by staying out while the leaders pitted. When the race went green, Briscoe quickly passed Smith but was soon caught by Cindric and Bell, both of whom easily passed the No. 98 driver. Cindric soon gapped Bell, and ultimately claimed the victory by 3.78 seconds.

Road course specialist AJ Allmendinger rallied to finish third, ahead of Tyler Reddick, while the battered machines of JR Motorsports teammates Gragson and Allgaier wound up fifth and sixth respectively.

Briscoe fell to seventh, followed by Custer and Justin Haley. Brandon Jones rounded out the top 10.

Not a word about Jeffrey Earnhardt being replaced by Jack Hawksworth. What’s up with this news ommission? Will Frontstretch tell us the real story? On the other hand nice reporting that Austin’s grandfather was Jim Trueman. Did Tim Cindric ever work for Bobby Rahal?