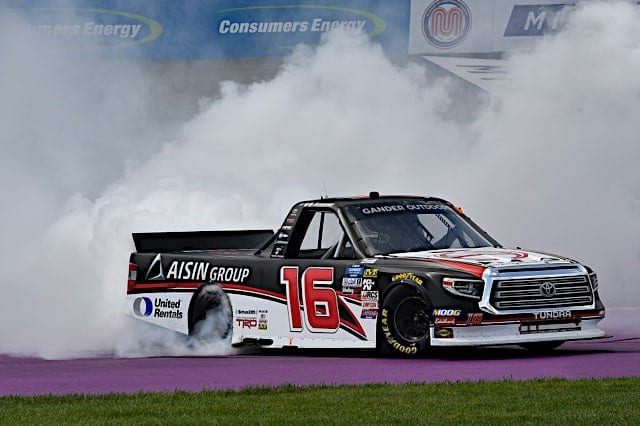 Joining Hattori Racing Enterprises after the team won the 2018 Truck Series championship with Brett Moffitt, Hill won the NextEra Energy 250 at Daytona International Speedway in February. It was his first race as the driver of the No. 16 Toyota and punched his ticket into the playoffs.

To close the Truck Series regular season, Hill again left his mark on the field. He survived an overtime restart and fended off several drivers desperate to win to make the playoffs to claim the Corrigan Oil 200 at Michigan International Speedway.

“We had really good speed. We could wrap the bottom and clear those guys coming off the corner pretty easily,” Hill said of his performance at Michigan. “I can’t thank Scott [Zipadelli, Hill’s crew chief] and these [Hattori Racing Enterprises] guys enough. They work their tails off. This is a brand new truck. For its first race, we’re one-for-one with it. That feels really good. The No. 16 Toyota was fast and I can’t thank everyone enough for their support.”

Coming into the race in Brooklyn, Michigan, though, Hill had not won any stages or races since the season opener at Daytona. And even more recently, the team had struggled with three straight DNFs, two for mechanical failures at Kentucky Speedway and Pocono Raceway, and a crash at Eldora Speedway.

“When we came into this race, we wanted to win this one because we’ve been in a slump,” Hill said. “We’ve been having issues, just stuff happening at the race track. So we’ve had a rough go at it. It feels really good to get the monkey off our back. Going into Bristol, we’re going to have a ton of confidence and motivation.”

In order to earn the trophy, Hill understood what he needed to do on the final decisive restart.

“The biggest thing was just don’t spin the tires. Get a good restart,” he said. “I knew the No. 18 (Harrison Burton) was going to be pretty desperate trying to get a win. So I knew he was going to be pushing me really hard in the back. He gave me an awesome push to clear the No. 24 (Moffitt). Once we cleared them and I heard they were three-wide out back, I just knew I needed to hit my marks and then they wouldn’t be able to drive back to us, especially when I heard they were five (car lengths) back.

“I just tried to hit my marks those last two laps the best I could. Luckily enough, they didn’t straighten out and get a big run down the backstretch enough to get to us. It was such a great effort from our team with the new truck. Being able to wrap the bottom like we did showed how good that truck was.”

Hill’s second win of the season definitely rewards him and his team for their struggles over the last month or so. In the last three Truck Series races leading up to the Corrigan Oil 200, Hill has posted an average finish of 31st, hardly indicative of a championship-contending driver. On top of that, due to a mechanical issue, he failed to qualify for the NASCAR Xfinity Series race at Daytona International Speedway last month. To describe how relieving winning the Corrigan Oil 200 felt in one word: huge.

“We’ve had such a rough go at it the last little bit,” Hill said. “We’ve had really good speed especially on the bigger tracks like the 1.5-mile tracks. To be able to come here today, our No. 1 goal was to go out there and win the race and put a really good stamp on the regular season. We’ll build the momentum through the playoffs. I definitely think we did that.

“All our issues are behind us and we have to keep looking forward. We can’t dwell in the past. Going to Bristol, come Monday, we’ll be going over notes, watching video, doing everything we can to be ready for it. We’re going to try to go get another one.”

Crew chief Scott Zipadelli echoed those thoughts. He too remained steadfast that those struggles are behind the team, and they will be thoroughly prepared in the playoffs.

“We can put a finger on [our struggles],” Zipadelli said. “The only thing we can do as a group is to continue to work hard, put our heads down, and make sure we didn’t overlook something. Keep the morale as upbeat and don’t change the atmosphere. Don’t beat the guys down; they do an amazing job.

“We enjoy each other so much and we do such an amazing job. I think that gets us through the humps. Going forward, all we can do is make sure our equipment is to the specs that we think it is. We can’t worry about what-ifs; we just have to do our job. Today it worked out.”

Indeed it did for everyone at Hattori Racing Enterprises. The team now turns its attention to the playoffs.

With the reseeding of the point standings, Hill is now fourth in points. While his margin over the Round of 8 cut line is only three points, Hill and Zipadelli are confident they can do damage in the playoffs. Although the team won the championship last season with Moffitt, Zipadelli will employ a similar playbook.

“We’ve been working really hard to build this new truck to come here,” Zipadelli said. “It proved that’s definitely a way better piece. We’ve been working on our equipment the last month to prepare for Bristol and the other ones. But I don’t know if there’s a whole lot you can change cause every week you try to win. We’re going to get out of here and work really hard for Bristol and try to get as many points as we can there and try to go win the road course.

“I just keep kicking the ball down the road trying not to look too far forward so we don’t lose focus on what’s right in front of us. Like Austin said, this is a big relief for us as a group to get into victory lane this way in this fashion. The truck was fast, he did an amazing job. We’re going to go for championship No. 2.”

Hill has enjoyed a career-best season. He has won his first two Truck Series races, four of his five top-five finishes came this season, and he has led more laps this season than his combined total beforehand.