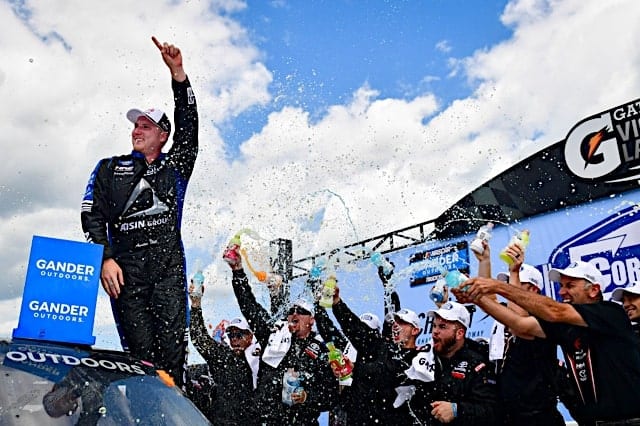 Austin Hill capped the regular season of the NASCAR Gander Outdoors Truck Series the same way he opened it at Daytona – in victory lane.

Holding off a spirited charge by Sheldon Creed in overtime, Hill scored his second win of the 2019 season at Michigan International Speedway on Saturday (Aug. 10) at the expense of Creed, Tyler Dippel and Harrison Burton, all of whom were running in the top five late and needed a win to qualify for the Truck Series playoffs.

As a result of Hill’s win, Matt Crafton secured the eighth and final playoff spot on points.

Hill’s win came after a nasty wreck on lap 97 destroyed the DGR-Crosley fleet and simultaneously took Todd Gilliland out of playoff contention. Tyler Ankrum, who restarted from the race lead, spun his tires as Crafton was pushing him, sending his Toyota spinning right into oncoming traffic on the frontstretch.

Out front proved to be a tough place to be for many drivers over the course of the race. Polesitter Ross Chastain led all 20 laps of the first stage, only to have his day derailed when contact between Johnny Sauter and Codie Rohrbaugh on pit road damaged Chastain’s No. 45 truck beyond repair after it sent Rohrbaugh’s machine into Chastain during the first stage break.

With Chastain out of the picture, Ben Rhodes would assume the race lead and hold it until lap 33, when Christian Eckes spun for the first time of the afternoon and brought out the yellow. While Rhodes and many of the leaders pit for tires and fuel during that stop, Brett Moffitt stayed out, besting Hill during the final laps of stage two to score his second stage win of 2019.

When the final stage went green on lap 48, playoff contenders Creed and Rhodes pitched a fierce battle that saw the duo trade the lead multiple times between laps 48-57 until Cory Roper slapped the turn 2 wall to bring out the yellow. Again, Moffitt would stay out and assume the race lead on the lap 62 restart, only to have Gilliland take the lead from him in turn 3 on that lap.

Lap 66 saw the yellow fly again when Rohrbaugh spun in turn 4, bringing Moffitt to pit road while Gilliland stayed on track. Gilliland and Rhodes battled for the race lead from the lap 70 restart up until lap 76, when the two made contact in turn 1 blocking each other; Gilliland dropped from the lead to sixth, while Rhodes was forced to pit after cutting a tire during the exchange. Neither would lead the race again.

After the late race incident that collected more than a handful of trucks, Hill cruised to the checkered flag in a green-white-checkered finish.

Grant Enfinger captured the regular season championship at the end of stage one, securing 15 playoff points for the accomplishment. The driver of the No. 98 Thorsport entry clinched his playoff position by starting Saturday’s event.

Full results from the Corrigan Oil 200 at Michigan International Speedway

Yup, they couldn’t get it done in KBM equipment!