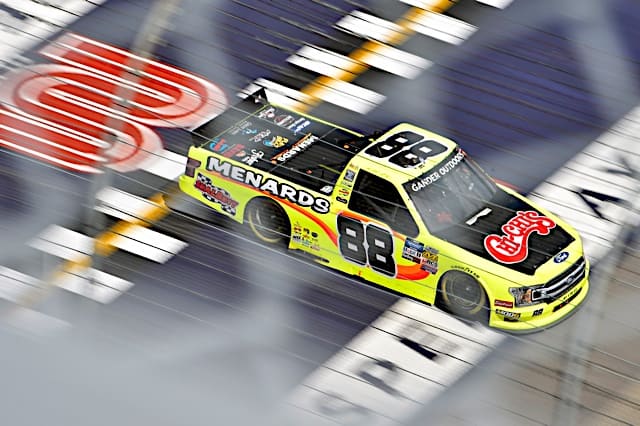 Matt Crafton entered the 2019 Corrigan Oil 200 in a precarious situation in the playoff standings. He was second in the point standings, but he was the last driver above the playoff cut line. He was safe on points, but he could’ve been knocked out if a full-time driver below the cut line won at Michigan International Speedway.

Luckily for Crafton, that wouldn’t be the case as Austin Hill claimed his second win of 2019 and prevented a first-time winner this season from leap-frogging Crafton.

But the scenario was something Crafton was conscious of entering Saturday’s (Aug. 10) race.

“I wasn’t really worried about it,” Crafton said of his approach. “It would’ve been a shame that we were second in points, have the best average finish of everybody all year in the Truck Series field — to be knocked out, it would be pretty sad on our (ThorSport Racing) part. To be honest, to not have the guy who has the best average finish to not be in the playoffs…” Crafton shrugged his shoulders at the end of the last sentence, allowing the silence to speak for itself.

On race day though, Crafton experienced some challenges.

“We had a part failure in practice,” Crafton said. “In qualifying, about 300 feet before the finish line, it (the engine) shut off.”

Despite qualifying 12th, Crafton dropped to the rear of the field. That didn’t hinder his day much, finishing the first stage in 10th place.

“I thought we were all right there on the first run,” Crafton said. “We started last and we had a really good chance.”

Crafton didn’t accrue any stage points in the second stage, but again, he was safe on points. The battle for the lead intensified as the laps wound down, and Crafton took notice of the drivers in front of him being in position to knock him out of the playoffs.

Then, when the caution flag flew on lap 94, Crafton was less than pleased.

“They threw the caution for a little bit of grass on the infield,” he said.

As a result of the caution period, Crafton restarted fourth, in the second row on the outside line behind leader Tyler Ankrum. When the green flag was displayed to restart the race on lap 96, chaos ensued when Crafton made contact with Ankrum.

“I think he (Ankrum) just spun his tires a little bit,” Crafton said. “When I got to him, I went to try to help him. It didn’t help but there was nothing ill-intended there. I was just trying to help him along. Tried to shove him out to the lead and maybe get me in second. I hate what happened there.”

Crafton noticeably felt bad for the contact with Ankrum.

“We worked so good there on the restart before that and I shoved him to the lead,” Crafton said. “Unfortunately, it ended up as wrong timing.”

On the final restart, the first overtime attempt, Crafton had a dilemma: who to push.

“I was like, ‘Damn, do I push Brett [Moffitt] right here?’” he recalled. “Should I really get to his rear bumper, push him, and see him spin the tires? At the end of the day, I’m like, ‘Man, if I turn him sideways, then the No. 18 (Harrison Burton) could win the race.’ I tried to be smart right there.”

When the checkered flag flew, Hill won the race, and Crafton made the playoffs.

“All in all, we ended up fine,” Crafton remarked, breathing a sigh of relief at his fortune.

With the points reset as the Round of 8 begins for the Truck Series, Crafton is sixth in the point standings. He is confident he can advance in the playoffs though for one reason.

Crafton also shared his thoughts about the possibility of missing the playoffs.

“Where I come from, racing was a whole season running for the championship,” he said. “To win one race, and then win Homestead after floundering around, you can do that. Honestly, we’ve put a decent finish together. To have the best average finish of all drivers in the Truck Series, we can hang our hats on it. I would’ve been pretty pissed off to be knocked out. But, I’ve been doing this a long time and stuff happens.”

Crafton has no doubt he and his ThorSport Racing team can win the championship. After all, they’ve won two championships. So what is their secret formula?

“We try to just be consistent, not mistakes, and that’s what we pride ourselves on,” he said.

In summation, Crafton left Brooklyn, Michigan, knowing he and his team “did what we needed to do.”

If they continues that mantra, Crafton will be a force to be reckoned with throughout the Truck Series playoffs.

Matt Crafton and ThorSports Racing are homophobic dirtbags and should be stripped of sponsors.