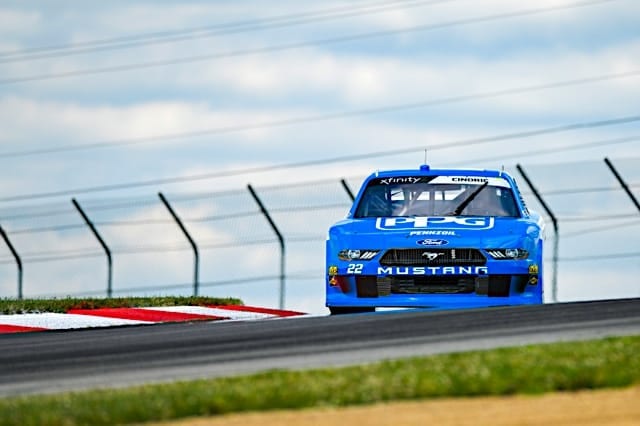 Austin Cindric‘s prowess on the road courses continued as the Xfinity Series tackles it’s second road course of the month, with the Watkins Glen winner from last week scoring the pole at the Mid-Ohio Sports Car Course on Saturday (Aug. 10).

Cindric will share the front row with Hawksworth, who will start on the front row in his Xfinity Series debut for Joe Gibbs Racing. Hawksworth, a veteran open wheel and sports car racer, was near the top of the practice charts all day Friday. He’s making his stock car debut after sponsor IK9 ended its association with regular driver Jeffrey Earnhardt earlier this month.

After an eventful set of practice sessions saw the “China Beach” corner of the course claim multiple victims, Saturday morning’s qualifying session saw only one driver get completely off course; Tyler Reddick went off the track in the “keyhole” corner with 14:20 to go in the first qualifying session. Reddick avoided any contact with the barriers and was able to drive away. The No. 2 car would rebound to make the second round of qualifying and is slated to start 10th.

Justin Haley reported experiencing a rear-end issue after posting the 13th quickest time in the first session that saw his Kaulig Racing team pull the car out of line to make adjustments, meaning the No. 11 will likely start at the rear for Saturday afternoon’s race.

Regan Smith failed to make a lap in the second qualifying session after experiencing brake issues on his out lap. It’s not yet known whether his JR Motorsports No. 8 entry will require adjustments that would cause the team to forfeit their starting spot and move to the rear.

Max Tullman and Patrick Gallagher did not take time during either session Saturday. With only 38 cars entered, both teams will be able to start the race barring mechanical issues.