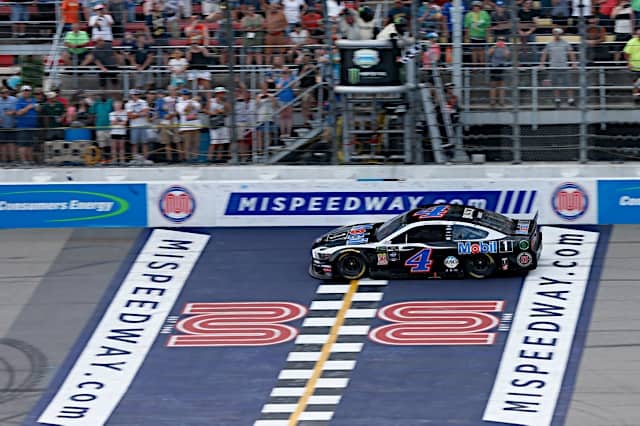 In the shadows of the motor city, the Fords from Team Penske’s Monster Energy NASCAR Cup Series stable brought incredible speed and performance to Michigan International Raceway but lacked one thing: fuel mileage.

Instead of a Penske victory, fellow Ford driver Kevin Harvick reaped the benefits of a flawlessly executed economy run to the checkered flag to claim his second victory of the 2019 season in the Consumers Energy 400 on Sunday, Aug. 11.

After leading a combined 121 laps, Team Penske drivers Joey Logano, Ryan Blaney and Brad Keselowski along with satellite teammate Paul Menard quickly shot to the top four positions after a lap 152 restart. But as fuel concerns came into play, Harvick methodically picked his way through traffic and took the lead a final time from Logano on lap 183.

“It takes a lot of people to make these cars go around, and winning races is what it’s all about,” a jubilant Harvick exclaimed as he celebrated with his son Keelan after the race. “Just can’t do it without all you guys. I mean, to come here to Michigan and win for Ford, and I know how much Mobil 1 likes to beat that Shell car (a nod to a rival sponsor adorning Logano’s car), so that was cool.”

A Michigan tradition in the making! ?@KevinHarvick and Keelan bring back their @MISpeedway celebration from 2018! pic.twitter.com/8wU3NwZweC

After starting in the back for failing pre-race inspection, Martin Truex Jr. aggressively snaked his way through the field to claim an impressive stage one victory. While Truex surged, Jimmie Johnson slapped the wall on lap 15, which produced significant damage to the No. 48 Chevrolet and was ultimately relegated to a 34th-place result.

Shortly after Johnson’s debacle, Harvick came to pit road unscheduled on lap 33 due to a flat tire but managed to climb back up the leaderboard thanks to scheduled green-flag pit stops from the competition later in the first stage which equalized Harvick’s chances.

Logano quickly took the lead from Busch on the ensuing restart but was slowed by several cautions early in stage three, including a day-ending crash for Clint Bowyer, who slammed the turn 3 wall on lap 137 after contact with Menard.

A Ricky Stenhouse Jr. spin on lap 149 brought out the final caution. On the edge of a fuel window, every lead lap car pitted for fuel, but nerves were palpable in numerous pit boxes up and down pit road in regards to fuel mileage.

As Harvick cruised away to victory, Keselowski and Logano were forced to pit road for a splash of fuel, while several other competitors, including Blaney, Kurt Busch and Menard, were relegated to disappointing finishes after running their fuel cells dry on the final lap.

Amid the chaos, Denny Hamlin crossed the line second in front of Kyle Larson, who gobbled several positions in the final 10 laps thanks to the dry fuel tanks of competitors. Truex and Daniel Suarez rounded out the top five.