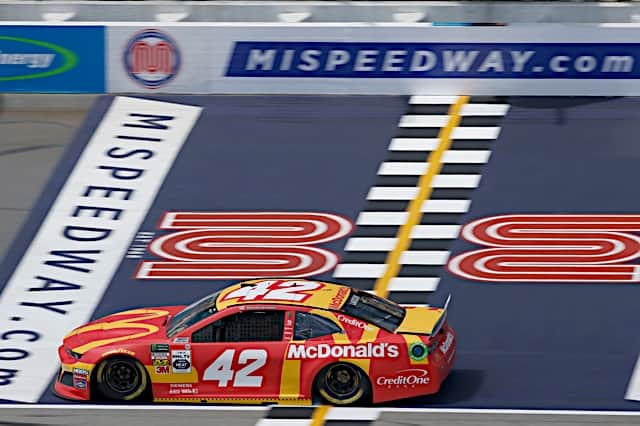 Kyle Larson entered the 2019 Consumers Energy 400 with a 46-point lead above the playoff cut line. In the previous Monster Energy NASCAR Cup Series race at Michigan International Speedway, he finished in 14th place. So the Consumers Energy 400 could have been a troubling race for the 27-year-old.

Instead, the sixth-year driver came home with a solid third-place effort at one of his best racetracks.

When Larson made his first pit stop on lap 45, he was nabbed for speeding in the first section on pit road. It set him and his No. 42 team behind, and they turned their focus into digging for positions for the rest of the race.

“I felt like we had a really good car. I was able to pass people. The strategies got off for us. We had to change two right sides. Then we put on two lefts in the second stage. That really kind of hurt my balance for too long. Then the balance finally evened out and I was fast again. Just got to work on figuring out the right adjustments. We never do two lefts, it’s very rare. I don’t know if it hurts my driving style or we just need to find the right adjustments.”

As the Consumers Energy 400 progressed, drivers steadily experimented with the outside lane covered in PJ1. Larson is known as a driver who likes the high line, especially with the PJ1, and he took advantage of the traction compound.

“It came in good at the end, especially (turns) 1 and 2,” Larson said.  “I was able to pass a lot of people up there carrying a lot of speed. That’s where I was making up the most time. I was running my fastest laps of the race up there. Towards the end, I was able to make a run up there and keep it wide open.”

He hopes NASCAR and other racetracks follow the example of Michigan International Speedway and apply PJ1 where it would be helpful.

“Every track where there is PJ1, the racing is better,” Larson said. “So the tracks and NASCAR should be proud of that.”

Eventually, the Consumers Energy 400 transformed itself into a fuel-mileage race and Larson was well aware of the situation on track.

“Just enough fuel to make it to the finish,” he said. “Over the last couple of laps the No. 19 and No. 12 both ran out. I felt pretty confident I was going to be able to pass them anyways. I saved a little bit because they were on the radio communicating about the fuel situation.”

Yet when Larson heard over the radio he finished in third place, he was pleasantly surprised.

“I thought I was battling for fifth there the last couple of laps,” he admitted. “When they said over the radio I finished third, that was the only surprising part. I knew I was going to get a top five, I just didn’t know I was going to get third. Our car was good; it drove fine. We just need to get a little bit better.”

Despite finishing in third place, Larson fully knew he was not a contender for the victory. The top two drivers? Chuckling, Larson remarked, “I couldn’t see them.”

Why wasn’t he a contender for the Consumers Energy 400 win? In one word, he got greedy.

“The packs were big. I got too greedy by going to the bottom and then I got freight-trained on top,” Larson said. “It’s kind of crappy how you get penalized for trying to pass people. So it would’ve been best if I would’ve just stayed in line, give up a spot or two, and then get it back once we got in line. It was a little frustrating when I made a mistake or two throughout the race.

“Again, I got too greedy. When you have a run, you want to take advantage of it. At times, I tried to pull down to pass people. With the draft, if you couldn’t back in line on top, you got freight-trained by two or three people. That’s just a product of the package. I just need to be a little more patient.”

Larson departed 71 points above the playoff cut line. He is pleased with the uptick in performance for Chip Ganassi Racing as a whole.

“Chip Ganassi Racing has been really good over the last couple months,” he said. “Kurt has a win, I’ve challenged for wins. It’s been a good month. This is a good time of the year to find some speed and get some rhythm going. Now we can lean on each other as we look ahead to the playoffs.”