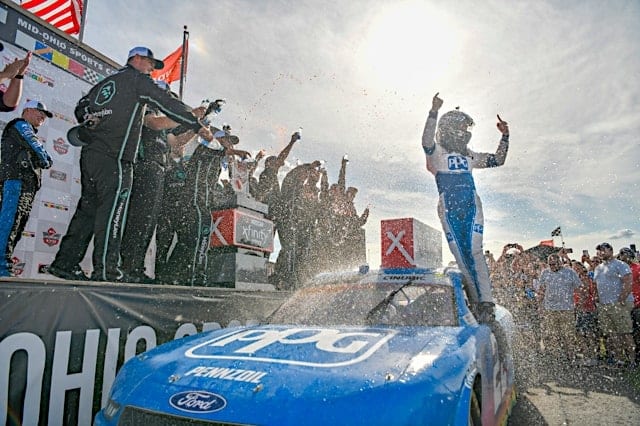 The last two weeks have been near-mirror images of 2018: Chase Elliott held off Martin Truex Jr. to win at Watkins Glen International, just like last year, and Harvick took the victory at the second Michigan race and celebrates with son Keelan in the car, just like last year.

Pole sitter Brad Keselowski led early with Harvick close behind, but Harvick had a tire go down during the first pit cycle. This caused the No. 4 team to pit early on lap 32, but Harvick rebounded to a sixth-place finish in the first stage.

Martin Truex Jr. looked strong early on in his 500th career start, slicing his way through the field from the beginning and getting to 14th by lap 9. He won the first stage and was strong in the second but faded late in the race.

Jimmie Johnson lost ground in his hunt for the playoffs, suffering damage after contact on lap 15 with the turn 2 wall and staying out another lap as he slowed. He pitted but never recovered, finishing multiple laps down.

Denny Hamlin also looked strong early, sailing by Keselowski and leading for a spell. However, he also faded late with Truex. Fellow Joe Gibbs Racing driver Kyle Busch made a move and took stage two from Truex, but he also struggled as the laps wound down.

Chris Buescher has entered the top 20 in points, finishing 14th in the No. 37 Chevrolet.

We may have started out the season with Team Penske and Gibbs as the powerhouses, but Stewart-Haas Racing (or at least Harvick) seems to be waking up. – Adam Cheek

Coming into the Xfinity Series full-time last year, the consensus about Austin Cindric was that he was going to be the guy to beat at road courses. He went 0-4 in 2018. This year, he’s batting 1,000, winning at Watkins Glen and most recently Mid-Ohio Sports Car Course on Saturday (Aug. 10).

Cindric went out in the final round of qualifying and set the fastest time. Once the race began, the No. 22 Ford went on to dominate, leading 46 of 75 laps en route to his second career victory.

Once Cindric passed Chase Briscoe for the lead with 13 laps to go, the only driver that could beat Cindric was himself. He checked out to a lead of over three seconds, taking the checkered flag ahead of Christopher Bell, who recorded his fifth consecutive top-three finish.

AJ Allmendinger crossed the finish line in the top three for the third time this season in three starts but got credited for his first such finish after failing inspection at Daytona International Speedway and Watkins Glen. Tyler Reddick and Noah Gragson rounded out the top five.

Jeremy Clements continued to impress on road courses, picking up his second consecutive 11th-place finish, just missing out on his second top 10 of the season. Despite a 15th-place effort, Jack Hawksworth was impressive, winning stage two in his first time in a stock car. – Dustin Albino

Austin Hill bookended the regular season with a pair of wins in the season opener at Daytona International Speedway and another on Saturday (Aug. 11) at Michigan International Speedway. Grant Enfinger clinched his spot in this year’s 2019 playoff field simply by taking the green flag in the Corrigan Oil 200. He joined Tyler Ankrum, Ross Chastain, Stewart Friesen, Hill, Brett Moffitt and Johnny Sauter, each previously notching their spots by virtue of winning at least one of the prior 15 races.

With Hill taking the win Saturday afternoon, Matt Crafton was able to point his way into the eighth and final playoff spot, though it wasn’t without its tense moments for the No. 88 team. A repeat winner this season was the best news Crafton could hope for aside from a victory by himself or teammate Enfinger.

Eight drivers are set to fight for the ?.#NASCARPlayoffs pic.twitter.com/m3jRQuPlNo

When the playoffs begin at Bristol Motor Speedway, Moffitt will hold a three-point advantage over Enfinger. Friesen sits six markers behind the leader, while Hill and Chastain end the regular season with 12 playoff points and are tied at fourth and fifth. Crafton is seeded sixth, followed by teammate Sauter. Meanwhile, Ankrum will line up eighth with a 17-point deficit to Moffitt. – Beth Lunkenheimer

Rick Ware Racing has been quite busy over the past week. It had three cars at Michigan this weekend in the Cup Series and announced Friday that it’ll have four cars at Bristol Motor Speedway — and that wasn’t even the only news about them that broke Friday, Aug. 9.

SportsCar365.com reports the organization will compete in sports cars starting this winter in the Asian Le Mans Series in collaboration with Eurointernational.  The team will field two Ligier JS P2-Nissans.

The only driver officially announced to be part of the Asian Le Mans Series effort is Cody Ware, who has competed part time in the Cup and Xfinity series this year.  He has a sports car racing background, having competed in Lamborghini Super Trofeo North America in the past.

In addition, RWR plans to enter the IMSA WeatherTech SportsCar Championship’s LMP2 class (with a current generation LMP2 car) in 2020.  Additional news on both efforts will be announced at a later date.

In 2012, @RickWareRacing ran this Ford Mustang in the Rolex 24 at Daytona. In 2020, the license plate decal might not return, but the team will. pic.twitter.com/seeOc5T2BJ

This is not RWR’s first foray into sports car racing.  The team had a part-time effort in the Grand-Am Rolex Sports Car Series’ GT class in 2011 and 2012, fielding a Porsche 911 GT3 Cup car and a Ford Mustang.  The Mustang, pictured above at the 2012 Rolex 24 at Daytona, was shared by Timmy Hill, Jeffrey Earnhardt, Chris Cook, Doug Harrington and John Ware.  It dropped out due to rear end failure.  Similar to their previous sports car racing adventure, expect to see some of the team’s NASCAR sponsors involved in their sports car program.  For example, the car pictured above was sponsored by Poynt, an app that sponsored the team in the Xfinity Series that year. – Phil Allaway