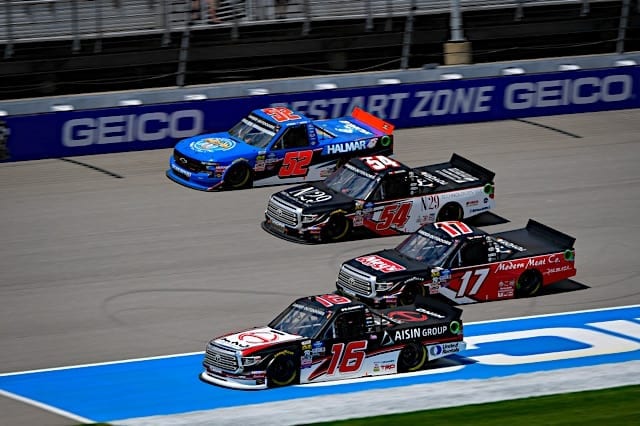 In a Nutshell: Austin Hill ended the regular Gander Outdoors Truck Series season the same way he began it with a trip to victory lane. The driver of the No. 16 Toyota led a race-high 26 laps, including the final 10, through an overtime finish to score his second career win in the Corrigan Oil 200 at Michigan International Speedway.

“It’s huge. We have had a struggle these last few races. We just keep having issues and just can’t finish these races,” Hill said after the race. “These guys just worked their tails off, day and night, just trying to put these trucks together. This is actually a brand-new truck. [The] first time it had seen the race track was yesterday. When we unloaded, we had to work out some bugs. We got it driving really good. I was really happy with the speed of it.

“Man, this race was crazy. I had to come from the back a few times. I had a speeding penalty one time, and I kind of thought our race was done, but man we came back through the field. This Toyota Tundra was really good today. I need to thank Hino, AISIN for coming on board, TRD, just everyone that makes it happen.”

Sheldon Creed, who faced this weekend without his suspended crew chief, truck chief and engineer after a penalty stemming from Eldora Speedway last week, made a strong run for the lead but had to settle for his second straight runner-up finish. Tyler Dippel scored a career-best third-place finish and the best result for Young’s Motorsports ahead of Brett Moffitt, who ended up fourth. Austin Wayne Self scored a season-high fifth-place finish and his first top five since Daytona in 2017.

Bayley Currey finished a career-best sixth, followed by regular-season champion Grant Enfinger. Stewart Friesen, who suffered a flat tire early in the race, ended up eighth, followed by Ray Ciccarelli, who scored a career-best ninth-place run. Matt Crafton, who started at the rear of the field following an engine change, rounded out the top 10.

Late-Race Big One Sends the Field to Overtime

The Corrigan Oil 200 restarted with just four laps remaining following Christian Eckes‘ third spin to bring out the final yellow on the day. But instead of a race to the finish, the field ended up littered with carnage when Tyler Ankrum spun his tires on the start and Crafton ran into the back of him, sending the No. 17 spinning into the outside wall. The contact spun Ankrum back into the rest of the field, setting off a melee that officially involved nine trucks, including several that had run toward the front and were in the victory lane conversation.

For DGR-Crosley, it was an expensive wreck. Ankrum’s spin off of Crafton’s front bumper was only the beginning of the melee that took out Ankrum’s teammates Anthony Alfredo and Natalie Decker as well. The trio, along with Todd Gilliland, were the only ones who were unable to continue following an extended caution to clean up and sent the field to an overtime finish.

Creed scored the highest finish of those involved in the wreck with a runner-up result and a late challenge for the win. Meanwhile, despite having a large part in triggering the multi-truck crash, Crafton ended up 10th. Johnny Sauter (12th), Jordan Anderson (14th) and Joe Nemechek (20th) were also listed as involved in the crash but were able to continue on and finish on the lead lap. For Nemechek, it was the first race this season he ran to completion.

When the checkered flag dropped over Michigan International Speedway, this year’s playoff field was set. Six drivers were already locked in based on wins earlier this season, and Enfinger clinched his playoff spot simply by starting the race. By the end of stage one, he had also clinched the regular-season championship, giving him an added 15 playoff points.

Eight drivers are set to fight for the ?.#NASCARPlayoffs pic.twitter.com/m3jRQuPlNo

Crafton took the final spot in the playoffs based on points, giving ThorSport Racing three trucks in the championship battle.

“I just raced my race because at the end of the day I knew the drivers that couldn’t win and which ones were going to be tough at the end,” Crafton said. “When the No. 4 (Gilliland), No. 18 (Harrison Burton), No. 99 (Ben Rhodes) were all one, two, three, I knew I had to get up on the wheel. I was content for a while riding third and then try to settle it on the last lap. I’m happy for my guys and the Thorsons to be able to put this No. 88 in the playoffs and go contend for a championship.”

When the playoffs begin at Bristol Motor Speedway, Moffitt will hold a three-point advantage over Enfinger. Friesen sits six markers behind the leader, while Hill and Ross Chastain end the regular season with 12 playoff points and are tied at fourth and fifth. Crafton is seeded sixth, followed by teammate Sauter. Meanwhile, Ankrum will line up eighth with a 17-point deficit to Moffitt.

KRISTL: AUSTIN HILL PUTS HIS STAMP ON THE REGULAR SEASON

Chaos on pit road! @JohnnySauter, Codie Rohrbaugh, and @RossChastain all make contact leaving the No. 45 with significant right-front damage. pic.twitter.com/Y1PMByJ8Cy

He's forced to make an unscheduled stop, and his postseason hopes take a huge hit. pic.twitter.com/w4bZhS1Vsp

Points Update: With the playoff field set (see above), Rhodes in ninth currently hold a slim one-point margin over Burton in the standings for best of the rest. Gilliland, Burton’s KBM teammate, is 11th and holds an eight-point lead over Creed. Dippel, who’s more than 100 markers behind Creed, Self and Anderson round out the top 15.

Thank you for everything Jack! Everyone at TRD has been awesome to work with and it’s a pleasure to drive these fast Toyota tundras! #TeamToyota https://t.co/VEiPm3u2qX

Damn close today, raced patiently saved it for the end and had a shot just couldn’t get to the 16 in time. Thank you @gmsracingllc @teamchevy we’ll go on to fight for wins the rest of the season.

What a day!!!!! I’m pumped I got the best guys in the garage they work their ass off every week!!!!!! P3 ran up front all day great driving by my man Tyler Dippel ????

Ya that sums it up well. On to Bristol! Gonna go try and make the playoffs drivers lives tough and steal every win we can! No quitters allowed! https://t.co/vOih8sz6Kt

Up Next: The Gander Outdoors Truck Series heads to Bristol Motor Speedway next week to open up the playoffs. Coverage for the UNOH 200 begins Thursday, Aug. 15 at 8:30 p.m. ET on FOX Sports 1; the race can also be heard on your local MRN affiliate or SiriusXM NASCAR Channel 90.