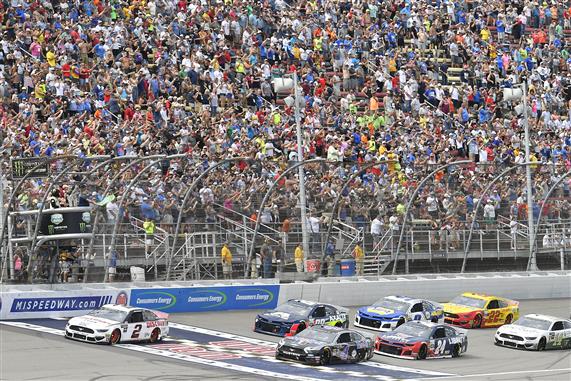 Sunday’s Monster Energy NASCAR Cup Series race was no exception.  Long green-flag runs at the beginning and end of the race shuffled positions at a racetrack where passing has been notoriously difficult.  The middle offered a series of short runs broken up by quick cautions that impacted more than one driver’s playoff hopes.

Michigan’s restarts, and the racing action that follow them, are the track’s biggest selling point.  There is nothing quite so spectacular as seeing drivers barrel into turn 1 three- and even four-wide.  The best racers use these moments as an opportunity to fight through traffic and pick off positions.  For just a few laps, the racing at Michigan is often some of NASCAR’s best.

The trouble is that these post-restart scrambles are literally just a few laps.  Michigan’s wide surface and multiple lanes lend the track to producing long green-flag runs.  If you are familiar with racing at MIS, you know what can happen under these conditions.  The field gets strung out, dirty air takes over and no one can pass.  Long runs are usually what produces that kind of lackluster racing for which the track is often criticized.

It feels like some of NASCAR’s most recent changes were enacted to combat the problems of Michigan.  Stages bunch up the field, break up long runs and create new opportunities for restarts.  This season’s aero package and horsepower reduction was supposed to keep the field closer together and increase the effects of the draft.  On paper, both changes seem like good ideas for improving the quality of racing at Michigan.

So far, it hasn’t worked out that way.  Stages will sometimes produce heightened battles for the lead right before the stage-ending flag flies, but most of the time they do not add any value to the race.  Not to mention that whatever justification NASCAR uses for stages, the practice still involves throwing a caution flag strictly for entertainment purposes, a practice that makes NASCAR look gimmicky and amateurish compared to other forms of professional motorsports.

As far as the 2019 aero package, it is inconclusive how much the new rules have impacted racing at Michigan, if at all.  Sunday’s race was better that last year’s August Michigan race, although that’s not exactly a high bar to clear.  The June Michigan race in 2018 was better than both events by a mile, probably because it was run under the threat of rain, forcing the drivers to race with a little more urgency.  Regardless of weather conditions, there was not noticeable improvement to the racing action using an aero package that seemed tailor-made for this track.

Between the 10 months or so from now until the next Cup race at Michigan, NASCAR will no doubt go back to the drawing board.  Maybe some other aero configuration, or even the Gen 7 car a few years down the road, will offer some solutions.

But no matter how NASCAR approaches ways to improve racing at Michigan, it should not focus on eliminating the long green flag runs entirely.  Those marathon green flag stretches may contain bad racing at times, but long runs are not guaranteed to be boring every time.

Sunday’s race was a perfect example of a Michigan race where the usual situation was reversed.  Instead of the restarts producing the most memorable moments, the long green-flag runs at the beginning and end of the event offered the best racing of the afternoon.

The first stage, which ran uninterrupted through the first 60 laps, created some interesting storylines.  Martin Truex Jr. and Denny Hamlin fought their way through the pack to the lead.  Teams experimented with different pit strategies, trying to gauge how valuable tires would be for later in the race.  Jimmie Johnson bounced off the wall, cut a tire and dropped below the playoff cutline once again as the No. 48 team scrambled to make repairs.  It wasn’t shaping up to be the race of the year, but it wasn’t boring either.

The last 48 laps green flag laps were also interesting.  Who had enough fuel to reach the finish?  Would drivers running out of fuel shake up the playoff picture?  Would fresh tires or track position matter more in the final run to the checkered flag?  None of these questions had clear answers when the race resumed on lap 153.

In time, they were answered.  Kevin Harvick drove through the field and made it to the finish line first before his fuel tank ran dry.  All three Team Penske cars ran out of gas late in the race, costing each of them points and a shot at the win.  Kyle Busch made it to the finish and wound up extending his points lead on Joey Logano, when the No. 22 car had Busch covered for most of the afternoon.

Hamlin made it to the finish as well, albeit second to Harvick for the second time in four races.  Daniel Suarez raced to a fifth-place finish and vaulted back into the hunt for one of the last few playoff spots.  No doubt about it, there was a lot to watch in the last green-flag run.

In contrast, restarts and short runs in the middle of the race was when the event felt most predictable and stagnant.

Aside from Busch swooping in to steal stage two and Clint Bowyer’s crash on lap 137, the restarts and short runs did not change the complexion of the race nearly as much as the long runs did.  The restarts were as visually spectacular as always, but they were not the most memorable or fun moments from Sunday’s race.

The clear lesson from this year’s August Michigan race is that sometimes the slow buildup of intense competition creates better racing than quick bursts of action.  NASCAR should still try to address the aero sensitivity of its cars, because the problem is still bigger at Michigan than it is at most tracks.  But it would be a mistake for the sanctioning body to keep chopping up races under the assumption that only restarts and short runs have value at a track like MIS.

After all, when you have drivers trying to out-think and outlast each other over a long green-flag stretch, who needs more restarts?

It is a shame to see a once great speedway like Michigan and I will add Pocono, be reduced to what they are now. Two speedways where most of the racing is boring.
Just go check out Racing-Reference.com to see just how competitive the races from the 70’s and 80’s were at both tracks. The only thing that has changed is the cars and how unraceable they are in current form.

Nascar’s solution to the problem is like a restaurant with bad food but the owner remodels the building. And still wonders why business is bad.
It is a good thing Nascar didn’t run Coke when new Coke came out in 1985. Because Nascar would have just made the can prettier and left the contents alone.