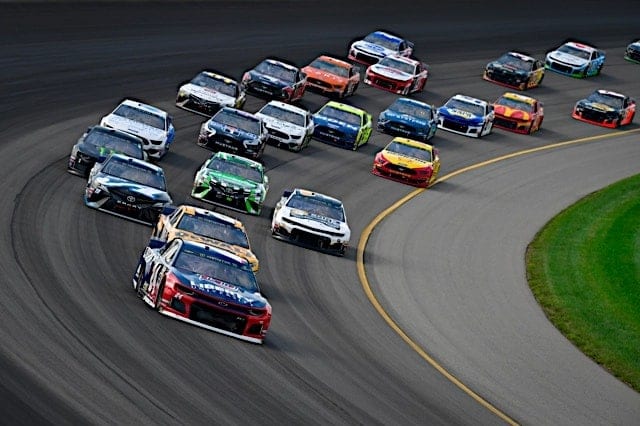 With the current rules, Michigan International Speedway has become either a toss-up or a runaway. It’s literally either or. That said, fuel mileage has always been key on the two-mile D-shaped track, regardless of series. That’s what we got on Sunday.

Sunday’s race was ultimately competitive at times. We had 19 lead changes, which isn’t horrible, but a number of those came during rounds of stops. There were some good battles that NBCSN brought to viewers.

The end of the race was where fuel mileage came into play. We got some coverage of who could go to the finish and who couldn’t, but that was mainly in and around the brief Through the Field segment. The last 30 or so laps of the race were centered upon the first three cars or so (excluding the Through the Field segment). It was such that many viewers (including myself) didn’t realize just how far Kevin Harvick and Denny Hamlin got ahead of the rest of the field. Harvick and Hamlin were relatively close at the finish, but third-place Kyle Larson was 16 seconds back. Part of that was Ryan Blaney having to back off, but that’s crazy.

Early in the race, there were a number of issues that got varying amounts of coverage. One was Jimmie Johnson’s encounter with the wall on lap 15. This was caught live when it happened. The contact completely ruined Johnson’s day and significantly damaged the Ally Chevrolet.  The team had to deal with a carcass that got wrapped around the right rear hub, not to mention the damage.

Admittedly, after the second pit stop under green, you never really heard anything about him after that. He ran around at the back of the field for the rest of the day. Even the post-race quotes didn’t really get into what Johnson was dealing with, but it couldn’t have been good.

NBCSN showed a replay of the crash that showed that Johnson tested the PJ1 TrackBite and the tires said heck no. This was more or less reinforced in the commentary. The booth noted that the PJ1 TrackBite has to be “activated” before it can be properly used. You never saw anyone running all four wheels in the compound intentionally on Sunday, but you did see it used at the entrance and exit of the turns.

Later on, Harvick cut his right front tire and was forced to make an unscheduled stop on lap 33. Viewers did in fact see this tire and how it was cut. I have no idea what cut it, but he was able to recover. As for Ricky Stenhouse Jr., I don’t know what happened to his tire to cause him to spin.

During race broadcasts, there is plenty of chatter among my colleagues on our Slack page. I’m a little too busy taking notes to participate much, but I get a notification on my phone every time someone posts. From those discussions, I noticed two issues that I didn’t experience that some of my colleagues did.

Matt McLaughlin made note of freezing issues on his end in Pennsylvania. “I’m going to guess Kurt Busch didn’t just have a four-minute pit stop while his pit crew played freeze tag,” McLaughlin said. That’s never good. Of course, if he had a stop of that length, he wouldn’t have finished 23rd, he would have been back with Johnson.

The broadcast went to commercial as soon as his feed unfroze. Some of my other colleagues had similar issues as well. That stinks, but it may have been localized. I didn’t experience any issues along those lines during the broadcast. If you did, by all means make note of it in the comments below.

Our newest editor, Zach Sturniolo, noted that the sound of the cars was overpowering early in the race before the volume was turned down. This is another sensation that I did not notice. The ambient volume of the cars didn’t seem much louder than normal. Given how much the field can spread out at Michigan, it’s probably one of the quieter tracks on the circuit. Of course, that’s somewhat relative since few race cars are louder than Cup cars these days.

One thing I did notice all weekend is that it seems like you heard a lot more of the crowd in Michigan. That wasn’t just during the race, but in qualifying as well. That could be as simple as putting a couple of those plastic circular dishes near the grandstands, or putting a couple of microphones up there. To me, the attendance didn’t look great on Sunday, but it was apparently up from last year.

Pre-race coverage was a little shorter than normal, but there was still some good stuff in there. The Behind the Driver piece this week had Daniel Suarez on the show talking about his time in the K&N Pro Series East. He named Michael Allen, his car chief with X Team Racing (often referred to as “Walleye”) as a big influence on his early career in the United States. Allen helped Suarez open up and become more comfortable with the English language, in addition to his driving development. Suarez admits that he was nervous about learning English. By language standards, it is a toughie to learn as your second language. Most of our readers here at Frontstretch are native English speakers, so they might not necessarily understand the difficulty. The language is structured differently than other languages, which makes it harder to learn, and at the same time, makes it harder for native English speakers to learn other languages.

At the time Suarez showed up, K&N East had an incredible amount of talent. Chase Elliott and Bubba Wallace were around, along with Larson. Compared to today, it was a much larger and stacked field.

Post-race coverage was a bit shorter than planned. The checkered flag fell right at the end of the regular time slot, which would technically be 10-15 minutes behind schedule. As a result, the number of interviews was down a little from normal. We did find out that Harvick’s been battling some pain recently. Nothing too severe, just the typical aches and pains of a 43-year-old man playing ball with his son.

Overall, Sunday’s broadcast was not all that bad. A lot of the technical issues listed above were localized. My colleagues had to deal with them, but I didn’t. Focusing on too few drivers hurt the end of the race, though. There are more stories than just the top two guys. We came out of Sunday’s Consumers Energy 400 with a number of interesting stories, like Ryan Preece getting a top 10, Suarez putting himself back in the equation for a playoff spot and more. Some of that got covered, but others did not. The coverage needs to be more comprehensive.

That’s all for this week. Coming up, we have a quadruple-header of action at Bristol Motor Speedway. Thursday (Aug. 15) is a doubleheader with the Gander Outdoors Truck Series and the K&N Pro Series East. Friday (Aug. 16) night sees the Xfinity Series have at it for 300 laps, then 500 big ones for Cup on Saturday (Aug. 17) night. Meanwhile, the NTT IndyCar Series visits Pocono Raceway on Sunday (Aug. 18) afternoon. TV listings are in the Television tab above.

We will provide critiques of the Cup and Xfinity broadcasts for next week’s edition of Couch Potato Tuesday here at Frontstretch. For the Annex later this week in the Frontstretch Newsletter, we’ll cover the Truck race from Michigan and the B&L Transport 170 from Mid-Ohio. I’m currently on the fence on whether to split them into two separate columns or just run them together on Thursday.

If you think the coverage has narrowed, just wait until the ‘playoff’ starts. The only drivers that will be covered are the top…however many it is this week. everyone else can park it for all the attention they will get.

I did not experience the screen freezing but I did notice the engine noise overpowering the commentator’s voice on a few occasions. It was like FOX’s “crank it up” but they tried to talk over it which made it annoying.

I think both NBC’s and FOX’s broadcast would be better (but especially NBC’s) if they had a goal to have 10 to 15 seconds of silence in every 60 seconds of broadcast. They don’t need to always be talking when there is nothing to say. Not every second needs to be filled with words. Sometimes it would be nice to just watch the race peacefully.

I started to attend MIS in 1979. They had more seats and were sold out.
Regarding your comment on JJ, he came out of the pits 2 laps down. The next time i saw him he was 7 laps down.
I don’t understand why people want to watch a race on their tiny cell phone screens.
Harvick set the bar for bringing your kid to the victory celebration. Now who’s going to top this with their kid?
I like how they acknowledged J D McDuffy at the Invocation. They never mention that he is the reason for the Bus Stop at the Watkins Glen Race.

Is it just me but it seems the NBC crew seems to think they have talk all the time. Jeff Burton really aggravates me yapping all the time. Fox does well with just their three. NBC JUST NEEDS TO QUIET DOWN!!!

Good announcers know when to shut up. Fox shills don’t know any better.

One thing I noticed is that I don’t see any commentators on the screen during a race.