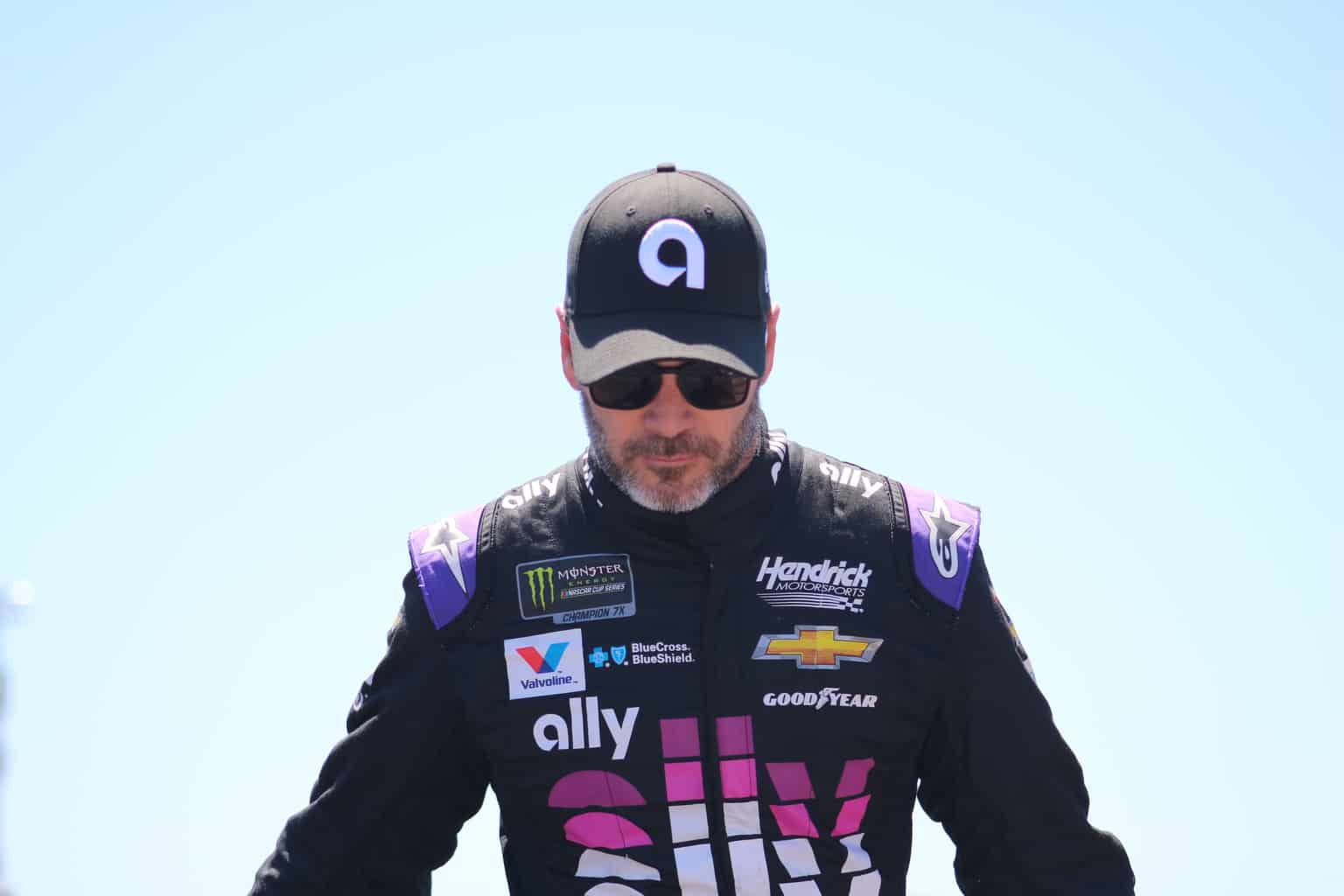 ONE: Jimmie Johnson’s Playoff Hopes Continue to Slip Away

Last weekend was a nightmare for Jimmie Johnson and the No. 48 team. Johnson hasn’t won a race in more than two years. He squeaked into the playoffs last season, but this year doesn’t look as promising. Johnson encountered issues early on, smacking the turn 2 wall and inexplicably staying out for an extra lap — while he was clearly slow down the backstretch — before coming down pit road.

This put Johnson in a hole he never dug himself out of, running in last for quite some time before misfortune befell others in the field. Spencer Boyd and Clint Bowyer both crashed, while Cody Ware and Garrett Smithley fell behind the No. 48. Johnson still plummeted in the standings, though. He arrived in the Great Lake State tied with Ryan Newman at the points cutoff. By the time race day was done, though, the Rocket Man had passed him. Johnson now sits 12 points below the cutline, 18th in points.

Still, he snuck his way into the postseason last year, and could very well do it again — provided that those in front of him have issues the next few weeks, of course, or if Johnson can eke out a win.

It’s improbable, given JJ’s historic run of making the playoffs, but it could very well be a different picture come crunch time, with the No. 48 on the outside looking in.

At the end of the day on Sunday, we saw a new name enter the top 20 in points that hadn’t appeared there before: Chris Buescher.

The driver of JTG Daugherty Racing’s No. 37 has snuck into the networks’ end-of-race points graphic, quietly putting together some strong runs this year.

Buescher averaged a finish around 21st in his first two years with the team, but is averaging just under a 17th-place finish in 2019. Some might not see that as a huge accomplishment, but considering the size of the team and his previous two years, it’s major.

He has four top-10 runs this season, with a best of sixth at Charlotte in May. A rough patch of finishes below 20th from Martinsville to Dover didn’t help his average, but he got right back on track and hasn’t finished below that mark since.

Buescher is coming up the ladder. That win at Pocono in 2016 was just a harbinger of things to come.

He’s also finished 16th five times this season, so someone start keeping track of how many times he does that.

This is an every-week thing at this point, but it’s something that should be commented on. Twitter lit up with descriptions of Sunday’s race at Michigan as “boring” or things along those lines.

Now, we’ve all been guilty of saying things like this. But Sunday’s race was far from it, especially the time period when many of these tweets surfaced, which was during the first stage.

It was entertaining to watch Martin Truex Jr. — who started at the back — slice his way through traffic toward the leaders. Brad Keselowski led much of that opening stage, he and Truex having arguably the best cars early on. They continued to battle, and Truex eventually came out the winner with pit strategy coming into play and the No. 19 crossing the line first to win the stage.

Two stories, as well — Truex in his 500th career start and Keselowski in his home state — also played into this and made it even more fascinating.

And what, pray tell, is boring about two of the day’s best cars, at least at that time, duking it out at the front of the field?

Austin Cindric has found his groove and has quickly become a title contender. Yes, he hasn’t won on an oval yet, but he’s shown excellence in the past two weeks, winning road course races at Watkins Glen and Mid-Ohio.

With those wins, Cindric is beyond locked into the playoffs and is in a comfortable position to gain some momentum. Christopher Bell, Cole Custer and Tyler Reddick have dominated the season, but Cindric has found his stride. It’ll still be a year or two before we see him rack up wins, but he’s shown his prowess as he continues to gain experience in the NASCAR Xfinity Series and is certainly a title threat down the road.

Plus, with Road America and the Charlotte ROVAL, who knows? Cindric had engine issues last year at Road America, but rebounded at the road courses with a third-place effort and 13 laps led at the ROVAL. The six-foot-three reporter-hugger could further build his momentum with a strong run or win in Elkhart Lake, and a win at the ROVAL would lock him into the second round of the playoffs and kickstart a possible title run.

Keep an eye on that No. 22. He’ll be growing large in the rearview mirrors of Bell, Custer and Reddick, especially when the series turns left and right in Wisconsin and North Carolina.

Three new faces grace the NASCAR Gander Outdoors Truck Series field, along with five we’ve seen before. Chastain, Ankrum, Hill and Stewart Friesen all notched their first truck wins of their careers this year, with the former three appearing for the first time in the playoffs.

The series itself, and its playoffs, are always exciting, but this field could make for one of the best yet. Grant Enfinger has been consistent all season, albeit without scoring a win, as has ThorSport Racing teammate Matt Crafton. Meanwhile, their other teammate Johnny Sauter has one win, but has been mildly inconsistent as of late.

Defending series champion Brett Moffitt has been in position to win a number of races this year, seeming to effortlessly make the transition to the GMS Racing No. 24 after Hattori Racing wasn’t able to bring him back.

On that note, let’s look at Shigeaki Hattori’s race team. That No. 16 is in the championship hunt once again, this time with Hill behind the wheel. Hill shocked the world at Daytona, leading 39 laps en route to a commanding victory to open the season. He added three poles over the course of the regular season, with seven more top-10s — including a victory last week at Michigan, with Hattori Racing winning for the second year in a row at the oval.

Half of the playoff field scored their first wins in 2019. Friesen was the most recent, finally breaking through on his home turf: dirt. The driver of the No. 52 scored that victory at Eldora.

Finally, Ankrum and Chastain round out the playoff field. Ankrum ran well all season, outrunning everyone at Kentucky for his maiden win. Meanwhile, Chastain has become the story we all love in racing; piloting the No. 45 for Niece Motorsports, a small team, he scored three wins and declared for series points midway through the season, meeting the points requirements and adding two of those wins to lock himself into the playoffs.

This is bound to be an exciting three months of playoff truck racing. Buckle up (in your truck), folks.