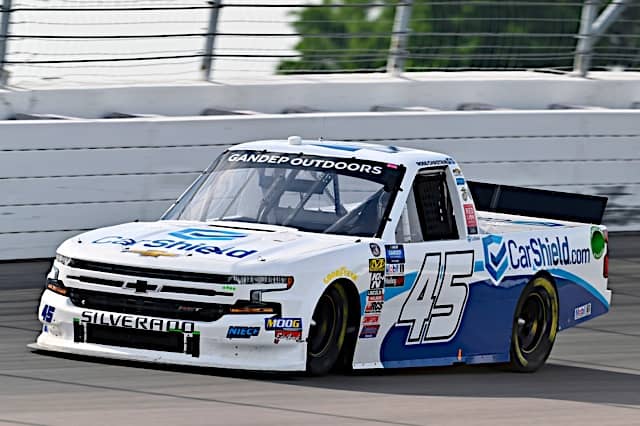 CarShield is back on Ross Chastain‘s No. 45 Niece Motorsports truck for the remainder of the 2019 NASCAR Gander Outdoors Truck Series season, the team announced Tuesday, Aug. 13.

“I’m so pumped to have the folks at CarShield back on board the No. 45 Truck again, especially as we look to make a championship run,” Chastain said in a team release.  “They brought us good luck at Gateway, and I’m hopeful we can make that magic happen again.  It means the world to me to have their support.”

The sponsor was on Chastain’s machine when he scored his first points-paying win at World Wide Technology Raceway at Gateway earlier this year. Chastain had won earlier in the season at Kansas Speedway but declared for Truck Series points midway through 2019. NASCAR mandated that he both win and make his way into the top 20 in points, and he did just that; although his win at Iowa Speedway was disqualified a few days after he declared, he went on to win the CarShield 200 the next week at Gateway.

This is both Chastain and Niece Motorsports’ first appearance in the playoffs.

“We are proud and honored to have CarShield join the team again,” team owner Al Niece said.  “I think Ross and this team have really shown what they are capable of, and we are excited that CarShield has recognized that potential and wants to help this team chase a championship.”