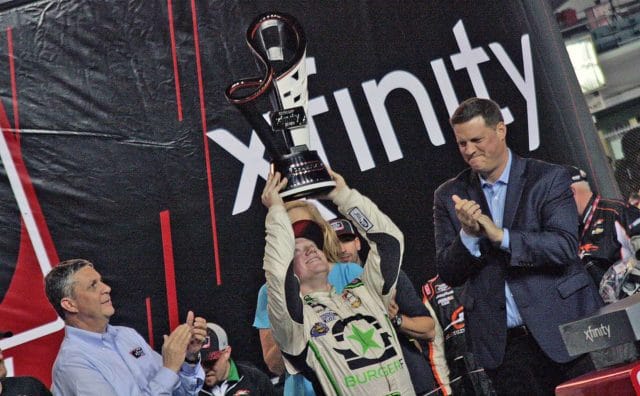 Is it working, or should Xfinity and Trucks go back to a season-long points battle? Clayton Caldwell and Joy Tomlinson debate.

Playoffs in XFINITY and Trucks? Why Not?

No matter how you feel about the playoffs determining the champions in NASCAR, all three series have them, and they look like they are here to stay. As old school as my line of thinking can be at times, this may come as a surprise to people, but the playoffs have grown on me.

It puts an emphasis on winning races, which is great. However, the playoffs in the Xfinity Series and Truck Series have just started. We’ve only been using playoffs to decide the champion in those series since 2016, and that fact caught some fire this week after Matt Crafton made comments about the topic after this past weekend’s race at Michigan International Speedway.

That got me thinking: Is it silly to have the playoffs in the lower divisions because there are not that many drivers to run in the playoffs and the seasons are so short? I think it’s a fun debate.

The Monster Energy NASCAR Cup Series began its playoffs (known as the Chase for the early years of its existence) back in 2004, and it never made sense to me not to have the playoffs in the other divisions, but I understood why they did it.

In the days when drivers could accumulate points in all three divisions, it was silly to have a playoff format. You could have run into situations where you had what was then referred to as “Busch Wackers” coming in and running for the playoffs in the Xfinity Series even though they would miss a significant amount of the races. It would make no sense. The same could be said for the Truck Series.

So until NASCAR put in the rule where a driver could only accumulate points in one division, it made no sense to have a playoff format, and they didn’t do that until the 2011 season. The focus now is put on the drivers in separate divisions again, and conversations to add the playoffs happened soon thereafter. I think it’s added some intensity to those series and has helped teams and drivers in the lower divisions get more recognition.

Look at Jeremy Clements a few years ago. Clements is as close to an independent driver as you can get these days, and a victory at Road America put that team on the map. Sure, they would have had their day in the sun in the old format, but as soon as everyone left the track, they would have forgotten about the victory.

Instead, Clements and his team got much more than that. They got a berth into NASCAR’s playoffs. The win continued to gain them recognition, taking pictures with other playoff drivers and having them compete for points with the big teams of the Xfinity Series. Without the playoffs, Clements’ win is just another win. The playoffs in the lower divisions are not perfect by any means, but for the recognition the smaller teams get, I think it works.

I think we take too many drivers for the playoffs in the Xfinity Series (I would chop it down to 10) and maybe four drivers in the championship race in each division is a little too much.

Maybe make it two drivers. In the Truck Series, the fact that 50% of the drivers who make the playoffs run for the championship at Homestead-Miami Speedway kind of waters down the championship a little bit in my opinion.

However, I think the playoffs do ultimately work for the lower divisions. It’s not perfect, but no championship format will be. I think it’s better off this way. – Clayton Caldwell

No More Playoffs … in Trucks & Xfinity

No, the Xfinity and Truck series should not have playoffs.

For one, the Truck season is too short in my opinion to utilize the format. The entire season is only 23 races, and the regular season only has 16 events. Just eight drivers get to battle each other, with two drivers eliminated after each round.

The Xfinity and Cup series have at least 10 more races than the Truck Series with more chances to win and compete for the championship. If Kyle Busch hadn’t nabbed five wins, things may have played out differently come crunch time.

Also, if a new driver finished first at Michigan, Crafton would’ve been knocked out. I mean, what kind of system allows for a driver second in points to almost get eliminated?

Yeah, we can make the case for, “Well, he should have won during the season so he wouldn’t get in this predicament.” Really, if NASCAR didn’t introduce the playoffs to begin with, he wouldn’t have to worry about that. The “win-and-you’re-in” mantra nearly overpowered Crafton’s consistency — he has the most top 10s of all the playoff racers.

So far this is not an issue in the Xfinity Series, as only six drivers have victories. The remaining six spots currently are open to the drivers with the most points. Still, neither series should use the playoff format. Competitors have an innate desire to contend for wins and would do their best to come out on top by the end of the year.

NASCAR should let the seasons proceed naturally without stages. One of the reasons NASCAR brought stages to the Xfinity and Truck series was to add more points to the playoff contenders. I also think it felt it would help the races be more entertaining. Unfortunately, stages hurt more than help some of those events. Just last week at Michigan in the Corrigan Oil 200, just 10 of the 20 laps in the second stage were green. That, of course, is a whole other issue in itself, but it just added to the chaos and lackadaisical product on-track.

I feel the playoffs are more to entice fans and get them excited for the end of the season. However, NASCAR is unlike any other sport and should not be compared with other major leagues. While I appreciate the sanctioning body trying something new, it hasn’t exactly worked well for the Xfinity and Truck series. They need to reconsider this format for the future, especially in Trucks. – Joy Tomlinson

I love the way this implies that a ‘playoff’ in the Cup series is a huge success. According to whom? Are the last 10 races sellouts? Are they outdrawing viewers in person and on TV? Are the fans wildly enthused with all the points racing and trying to keep track of what points mean what and how they apply to the playoff that has every team still on the playing field? Spreading the abomination around doesn’t make it less offensive.

And here we are, getting ever closer to the edge of the slippery slope.

…and came up with a system with even more points, even different KINDS of points, and they apply to different things! and you thought the Latford system was twisted?

The playoffs don’t work in any of the series unless it was designed to piss fans off and drive them away. If that was the goal then it was a huge success in all three series. Remember douchebags, no one asked for the chase or the playoffs, it was forced on us unwillingly. So stop pissing on our heads and telling us it’s raining.

I watch until the final 10 races, and then stop. It frees up a ton of time in the fall. At first I tried to just tune “The Chase” out but TV and the NASCAR media wouldn’t let that happen. Growing up I never paid much if any attention to the championship standings. To me, the race that week was everything – and I’d argue for some drivers simply winning once at the Cup level could make a career. Final straw came when Harvick was allowed to intentionally wreck most of the field at Dega to benefit his “playoff” chances. No thanks folks.. see you in February.

Yes agree 100%. Harvick wrecking half the field was a low point for the sport and encapsulated everything wrong with the playoffs.

The playoffs have been fine in the lower series. As was said above, it’s had the impact of NASCAR cracking down on Cup drivers in the lower divisions. I really don’t have a ton of sympathy for Crafton. I was actually surprised he was second in points. The 88 just hasn’t been competing for wins this season. This was just a weird season for the Truck points. You had Kyle Busch win all 5 of his starts. Chastain declaring for points mid season and Tyler Ankrum entering the picture.

If J-Jo doesn’t make it there will be a rule change to get him in. Money well spent by Mr. H.

Getting into the top 20 in points in the truck series is too easy since there are so many part-time drivers. It would not take many races to do that. Need to make it at least top 15 or even 12.

I agree about cutting the number of Xfinity drivers down to 10 or so. 12 is way too excessive.

How’s this for an idea?
Cup leave it alone no changes for at least 10 years. This should pretty much let most oddity scenarios play out and see what “normal” might look like.

Xfinity: change it to what some fans, such as myself, have brought up as an idea and have since the season itself is long enough, have a 10 driver “playoff” field, for 9 races and eliminate 3 after 3, 3 more after 6, and let the top 4 battle for the last 3 races and have them be different styles of tracks. I believe Phoenix, Texas, and Miami are technically different since Texas is one of the dreaded 1.5 “copycat” tracks and Miami is more oval in nature.
Playoffs point can also be accumulated for all 9 races, even the last one.

Trucks: Run a full season championship like the “old days” but with the current points setup. Due to length of races, maybe only have stage 1 at say 35% of the total laps and then one 65% of the laps. The races are just too short to break up into 3 stages.

This would actually give NASCAR a very good indication of which format NASCAR fans might actually like the best. If the truck attendance and viewership go up, hopefully and the are flat or decline for the end of the year then answer is provided by the fans.
If trucks slump and Cup remains flat, but xfinity goes up at the end of the year then maybe that is a preferred format by fans, If Cup goes up and the others remain stagnant that would be odd but fans noticed the other changes and chose the status quo and should stop complaining.

Keep in mind with these they need to stay in place for at least 4 years without much for changes.

Meaning Brian France, not the Brian who’s post is below mine. Oops!