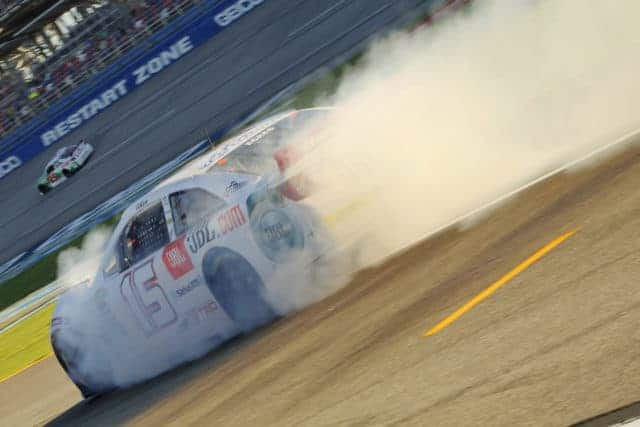 The ARCA Menards Series returns to action this weekend for the Allen Crowe 100 at Illinois State Fairgrounds. The first of two dirt races on the ARCA Menards Series will have one of the best points battles on its center stage between Christian Eckes and Michael Self. Twenty other drivers will take to the Springfield, Ill., dirt track as well, and they will look to steal the show from the two drivers who have been taking all of the spotlights as of late.

From Smokeshow to championship contender, Eckes’ 2019 season has been a whirlwind roller coaster, and it’s only starting. During the summer months, after he missed Salem Speedway and crashed at Talladega Superspeedway, Eckes has mauled down the points gap between him and teammate Self. Eckes tallied the victory the last time ARCA hit the track, and he also won the last time the series was at Illinois State Fairgrounds. The margin between him and points leader Self is just 80 points with five races remaining.

Joining the knockout, drag-out fight that’s brewing in the Venturini Motorsports group is dirt track veteran Logan Seavey, who stood out last year in the Eldora Dirt Derby with Kyle Busch Motorsports in his NASCAR Gander Outdoors Truck Series debut. Seavey then went on to earn the victory at DuQuoin with Venturini Motorsports, the same team he will race with this weekend.

Ryan Unzicker makes his return to the ARCA Menards Series. The dirt veteran has 17 starts in ARCA, all on the dirt of Springfield and DuQuoin. His career-best finish came in this race in 2016 where he finished third. Bill Hendren will field his car again this weekend for his 18th career start in the series.

ARCA veteran Will Kimmel will return this weekend for his first start of 2019 and first since Kansas Speedway last season. In 117 starts, Kimmel has a best finish of second three times (Salem 2011, Pocono 2014, and DuQuoin 2018). The second-place finish last season was his first top-five finish since he won the pole and finished seventh at DuQuoin in 2017.

So Christian K. was too lazy to have an actual picture from the Springfield mile but instead throws in a stock photo of who knows where….

I know it’s petty but…

…normally I’d support the ARCA series with my attention and dollars. In this case I’m boycotting Illinois State Fair because they uninvited the band Confederate Railroad for -gasp- having a Confederate Flag in their logo. A band with “Confederate” in their name from Marietta, Georgia…go figure.

I’ll save my dollars to go see Confederate Railroad just a spell down the road in Hokes Bluff, Alabama.