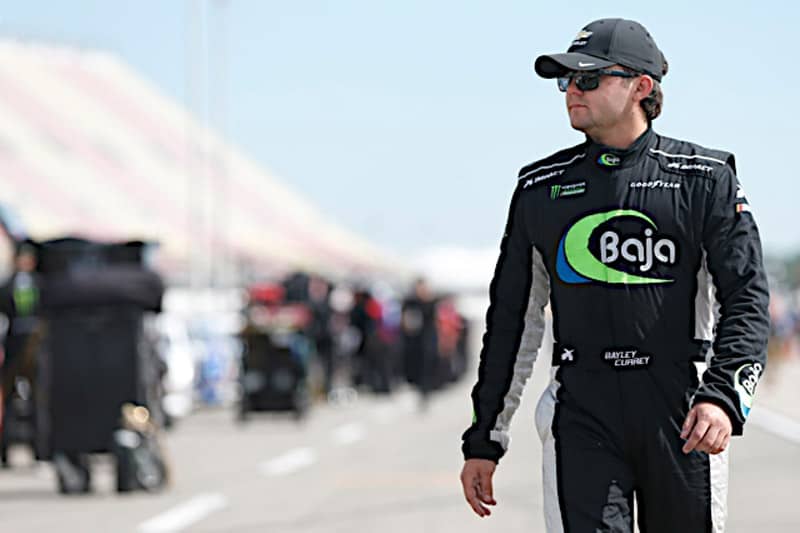 Bayley Currey was scheduled to pull double duty this weekend at Bristol Motor Speedway, running the No. 52 for Rick Ware Racing in the Cup Series, as well as the No. 17 Xfinity car. However, NASCAR removed him from the racetrack on Thursday (Aug. 15).

Sources told Frontstretch that when Currey tested positive for a substance that’s found in pre-workout and that one of the substances was banned from NASCAR’s substance abuse policy.

Currey, 22, was coming off a sixth-place finish in last weeks Gander Outdoors Truck Series race at Michigan International Speedway. He was said to be working out on a regular basis to enhance his cardio endurance, competing in 20 NASCAR events so far this season.

It’s unknown if Currey will enter the Road to Recovery program. As of press time, Rick Ware Racing has not named a replacement driver for the Cup or Xfinity races.

Shortly after this story ran, Currey issued a statement on Twitter.

DMAA was removed and banned by the FDA years ago. Then then sometime around 2015 the bad was lifted because they really didn’t have any proof that it was dangerous and causing heart problems. DMAA is a stimulant however it is very minor compared to something like Adderall. I have been a gym rat for almost 2 decades and DMAA did help with energy at the gym lifting weights and such after a long day at work. However, I personally don’t think it would give a driver any real benefit or advantage. I’m sure there will be some that disagree with me on that topic however my personal experience with it formed my opinion.

Thanks for the info. Seems nascar’s drug policy is as draconian (read ‘stupid’) as the zero tolerance policies found in public schools.

Tom B
Reply to  Mike

Mike is right. No common sense used in this decision by NASCAR or public schools. Was BZF indefinitely suspended or did he just step down. Personally I’m going out to buy some Juggernaut Irate because I need a boost of energy. Thanks NASCAR for bringing this to my attention.